Richard Florida, Co-Founder and Editor at Large at The Atlantic Cities, recently penned an article that focuses on two of my favorite topics innovation and cities. [“Innovation and the Wealth of Cities,” The Atlantic, 1 February 2013] He begins his article by asking, “Is America losing its innovative edge?” It’s a fair question because it doesn’t have an easy answer. Smart people offer very different answers to it. Florida first lists a few smart people who do believe the U.S. is becoming less innovative. He writes:

“Tyler Cowen, a professor of economics at George Mason University and the author of The Great Stagnation, and Robert Gordon author of influential recent study which asks “Is US Economic Growth Over?” both argue that innovation has plateaued; that the great life-changing inventions — automobiles, airplanes, electric lights, antibiotics, refrigeration — are in the past, and that the economic effects of today’s technological breakthroughs will ultimately be incremental. Venture capitalist Peter Thiel was recently quoted in The Economist declaring that innovation in America is ‘somewhere between dire straits and dead.'”

Those pundits obviously believe they have the evidence to back up their claims. On the other hand, Florida notes that there is “a growing group” of people who believe just the opposite. He writes:

“Others – including the Daily’s Beast’s Daniel Gross, Irving Wladawsky-Berger, former vice-president of technical strategy and innovation at IBM, W. Brian Arthur of the Santa Fe Institute, and Philip Auerswald, author of The Coming Prosperity – counter that America is poised for a new era of innovation and growth. Reviewing the current evidence, The Economist recently concluded that: ‘The idea that innovation and new technology have stopped driving growth is getting increasing attention. But it is not well founded.’ This in line with the detailed empirical research by the influential late innovation economist, Christopher Freeman, who found that innovation slows during the highly speculative times leading up to great economic crises, only to surge forward as the crisis turns toward recovery.”

In other words, both groups could be right. Innovation might have slowed or stalled during the Great Recession, but there is little reason to believe that innovation is dead or dying. In fact, Florida insists, “Detailed evidence from which to evaluate just how dead or lively America’s innovation system has been hard to come.” Florida introduces urban areas into the discussion of innovation by noting that the Brookings Institution recently released a study entitled Patenting Prosperity: Invention and Economic Performance in the United States and its Metropolitan Areas. Florida calls it “eye-opening.” He writes:

“Authored by Brookings’s Jonathan Rothwell and Mark Muro, Deborah Strumsky of the University of North Carolina at Charlotte, and José Lobo of Arizona State University, the report’s conclusions provide more reasons for optimism than concern. The study tracks America’s rate of innovation (measured by patenting) over the long sweep of U.S. history, from 1790 to 2011. Despite their recognized weaknesses, patents are the most commonly used measure for innovation, and the report takes great pains to make sure the patent data they use is accurate and reliable.”

Included in Florida’s article is a graph from the study (shown below) that “outlines the broad cycles of U.S. innovation. It shows the incredible uptick in the rate of patented inventions which occurred in the late 19th and early 20th century alongside the rise of a more science and technology based capitalism powered by the growth of industrial R&D. The rate of patented innovation leveled off in the early 20th century, as the graph shows, only to decline precipitously from the Great Depression to the 1990s. But over the past several decades the rate of patenting has picked up considerably. This might seem to suggest that the rate of invention is increasing as opposed to stagnating.” 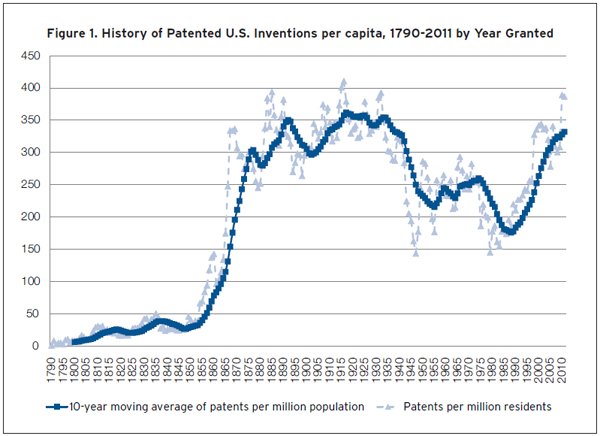 Florida’s optimism about the future lies in the fact “that patent quality (measured as citations), as well as quantity, … has been on the uptick [since] in 2010.” He continues:

“That said, it’s important to point out that this recent period has also seen the globalization of science and technology and of U.S. patenting. Nearly half of U.S. patents are awarded to foreign inventors. I asked Deborah Strumsky, one of the coauthors of the report and a leading international expert on patent data how the study accounted for this, and she told me that: ‘Our counts are similar to U.S. GDP, it is about what happens within the U.S. border regardless of the company headquarters that produces it.’ Adding that: ‘These are all US filed patents. If the inventor was living outside the U.S., then they are not included.’ The study and chart thus include domestic patents granted to U.S. both native- and foreign-born inventors. From where I sit, this ability of the U.S, to attract foreign companies and foreign-born inventors to its shores acts to broaden its range of innovative capabilities and bolster its technological and economic advantage overall.”

Politicians are beginning to recognize this fact as well and it is one of the driving forces behind the latest debate about immigration reform. But Florida’s post isn’t about immigration and innovation, it’s about innovation and urbanization. He reports, “The study delves deeply into the geography of innovation across U.S. metros. Like so much else in our increasingly spiky world [PDF], the landscape of American innovation is clustered, concentrated and uneven.” The greatest spikes can be found in metropolitan regions or in university towns. “The report ranks all 366 U.S. metro regions on patent levels and growth.” The report concluded:

“The 100 largest metro areas are home to 65 percent of the U.S. population in 2010, but they are home to for 80 percent of all U.S. inventors of granted patents since 1976 and 82 percent since 2005. Few patents are invented outside of metro areas. Just 20 metros, accounting for roughly a third of the U.S. population, generate almost two-thirds (63 percent) of patents, and just the five most patent-intensive metro areas account for about 30 percent of total U.S. innovation. The San Jose metro — home to Silicon Valley — leads both in terms of total patents and its rate of patenting per capita. San Francisco, New York, Los Angeles, Seattle, Boston, Chicago, San Diego, Minneapolis-St. Paul, and Detroit make up the top 10 in terms of total patents, while university towns like Burlington, Vermont; Rochester, Minnesota; Corvallis, Oregon; Boulder, Colorado; Ann Arbor, Michigan; Austin, Texas; Santa Cruz, California; and Poughkeepsie, New York (home to IBM) round out the top 10 in terms of patents per capita. The report substantiates the view that research universities increasingly act as anchors or hubs of the innovative, knowledge-based economy.”

This latest study adds more evidence to the fact that cities can be catalysts for growth and prosperity. Since the world is becoming more urbanized, this should be welcomed as good news. For more on this subject, read my post entitled Tapping the Economic Power of Mega-Cities. Florida reports that the study “finds a connection between patents and regional development (measured as economic output per worker).” The report concludes:

“The results clearly show that patenting is associated with higher metropolitan area productivity. The analysis cannot rule out that the link is caused by some missing variable or reverse causality, but given the control variables and the fact that patents were lagged ten years in the analysis, the most likely explanation is that patents cause growth.”

Although Florida is not convinced that “patents cause growth” per se, he claims that he is confident that “the pattern is fairly consistent over time.” He continues:

“My take remains that only a relatively small subset of metros have the robust innovation ecosystems that enable them to effectively turn local innovations into economic growth. In many more, the fruits of local innovation flow away to other places. To be truly effective, cities and metros need to do more than produce innovations they must also have the ‘absorptive capacity‘ to productively make use of them.”

What Florida is arguing for is a real plan to make cities more productive and attractive for skilled workers. Alan Berube, a senior fellow and deputy director of the Brookings Institution’s Metropolitan Policy Program, believes that one way to do that is to return cities to their historical position as centers of trade. [“The Return of the Trading City,” Project Syndicate, 25 January 2013] He writes:

“Cities unite people who seek common space to exchange goods, services, and information. … In the nineteenth century, the English economist Alfred Marshall described how cities are really ‘agglomeration economies’ that gather the infrastructure, workers, and information needed to promote innovation and trade. And, in 2008, Paul Krugman received the Nobel Prize for his work explaining how, amid increasing capital and labor mobility, metropolitan areas remain crucial nodes for trade. In short, cities make trade possible.”

Berube believes that “the United States and other advanced economies” have failed to recognize this critical role for cities and, as a result, adopted the wrong trade policies. Good trade policies, he insists, would “support the distinct comparative advantages of cities and regions in global markets.” He continues:

“Furthermore, local policymakers often forget that trade increases city residents’ prosperity by bringing in new wealth, in turn contributing to job creation and bolstering demand for services in the local economy. In recent decades, too many American cities have relied on vanity projects – such as stadiums, casinos, convention centers, and shopping malls – to stimulate economic growth. But, while such projects may attract limited out-of-town revenue, they are more likely to recirculate local money. At the same time, they fail to capitalize on rising demand in global markets – for which the growth of emerging-market cities is largely responsible.”

Economists routinely point out that the future of the global economy is shifting towards emerging market countries and will depend on the strength of the growing global middle class. Cities in developed countries will only benefit from a growing global economy and increased prosperity if they can find a way to tap into the emerging market money flow. Berube concludes:

“Global trade is not pleasant; it is fiercely competitive, and policymakers must address the short-term costs that it routinely imposes on people and places. But global trade also provides a route to long-term prosperity – one that runs squarely through cities. Two millennia after the opening of the Silk Road, a global network of trading cities is beginning to reemerge. Local and national trade policy should aim to advance this process.”

Clearly, Florida and Berube believe that cities hold the key to America’s economic future (as well as to the future prosperity of other nations as well). Whether policymakers come to a similar conclusion and act to strengthen the economic attraction of cities remains to be seen.