In a post entitled Smart Cities and Traffic, I discussed how big data analytics are helping to reduce traffic challenges in urban areas. I also indicated that I would discuss future transportation concepts that could help reduce or eliminate traditional automobile traffic in crowded urban environments. I’m going to split that discussion into two parts. In this post, I’ll discuss some concepts that have been proposed concerning the movement of people. In a second post, I will discuss concepts relating to the movement of goods.

Tiffany Dovey Fishman, a manager with Deloitte Research at Deloitte Services LP, wrote a report entitled Digital-Age Transportation: The Future of Urban Mobility in which she asserts there are no silver-bullet solutions to urban transportation gridlock. All, however, is not lost. She claims that “next generation urban transport systems will connect transportation modes, services, and technologies together in innovative new ways that pragmatically address a seemingly intractable problem.” She depicted a number of those ways in the following graphic. 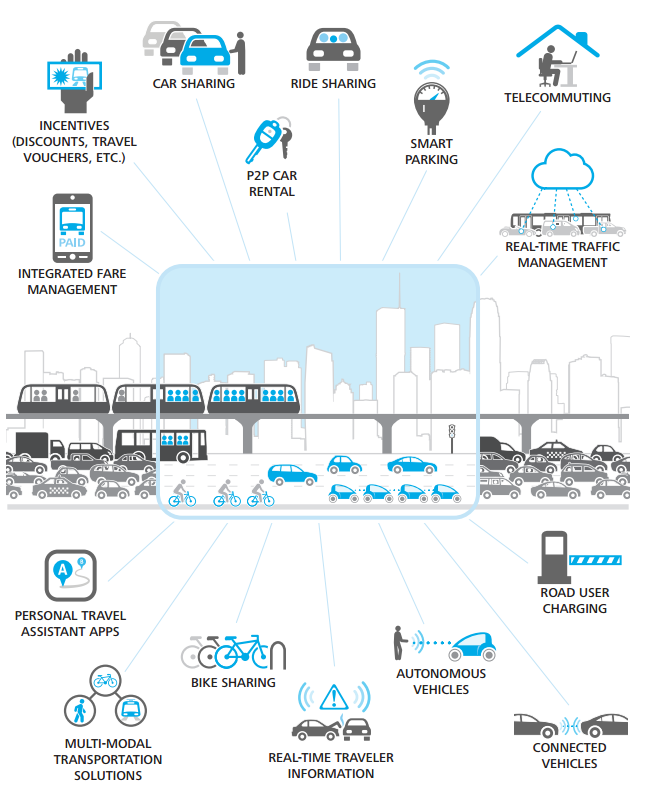 You will notice that automobiles still play a prominent role in Fishman’s integrated concept. In the post referred to above, I stated that the automobile industry can feel the earth moving beneath its feet and smart automobile makers are going to evolve their business model so that they can successfully traverse this new landscape. Audi is one of these automakers. In collaboration with researchers from Columbia University, Audi worked on the “Extreme Cities Project 2050: seeing cities as an opportunity for mobility.” [“Audi forecasts a kinder, gentler, more collaborative urban future,” by Danny King, Green Car News, 8 May 2013] For this project, five hypotheses were explored. One of those hypotheses was called Asymmetric Mobility. An Audi press release discussing the project described the hypothesis this way (remember they are talking about the year 2050):

“‘Getting from A to B’ used to mean taking a clear decision. Does it make more sense to go by train or by car to an evening event – or is it better to call it off and spend the evening at home, because getting into the city simply takes too much time. Today it can already be observed that asymmetric patterns of mobility are continually on the increase, which means it is no longer necessary to take decisions. People use various means of transport to get around day by day and also to carry out the tasks of their daily lives. While sitting in a train they can attend to their emails by smartphone or take part in a video conference linked to the other side of the world using a headset and camera. The asymmetric mobility hypothesis underlines the fact that mobility will be much more flexible in the year 2050. Changing between different modes of transport could be made much simpler and more efficient, and be more of an experience, in the future.”

Several factors must come together to make Asymmetric Mobility a reality. The first is already in work — mobile technologies. I suspect by 2050 the penetration of mobile technologies will be nearly 100 percent. Second, a variety of transportation options need to be available. Otherwise the options will be too limited for the hypothesis to work. Third, analytic insights powered by artificial intelligence systems and connected to the cloud must be available. Finally, those transportation options need to be affordable.

General Electric shares a similar vision of the future as the one hypothesized by Audi. “Imagine urban transportation as a seamless whole, an integrated system of shared transportation options powered by renewable energy. Such a system would replace disconnected modes of transport, such as cars, bikes, buses and trains, with an integrated system that incorporates all of them.” [“The Future of Urban Transport: Multi-Modal System,” by GE Look ahead, The Economist, 26 April 2013] The article reports that Deutsche Bahn, Germany’s largest train operator, “is leading a demonstration project in Berlin known as BeMobility. The project involves more than 30 public and private stakeholders who together are demonstrating how electric vehicle sharing can be integrated into the public transport system.”

General Motors would like to see an electric vehicle sharing scheme succeed, because it thinks it has the perfect vehicle for it — the Electric Networked Vehicle (EN-V). [“Wired Wheels: Taking a Spin in the Future of Urban Transportation,” by Larry Greenemeier, Scientific American, 10 January 2011] You can watch a video about the vehicle by clicking on this link. Nissan’s candidate in this field was revealed in 2009 and is called the Land Glider. [“Nissan Land Glider Concept,” by Tony Swan, Car and Driver, October 2009] SmartCar has also entered the field with a new ” Smart Electric Drive” model. [“Have You Seen the All-New Electric-Drive smart?” AskPatty.com, 20 June 2013] Another interesting candidate is the AIRPod, a car that uses compressed air instead of electricity that is being developed in France. [“The AIRPod: ‘The future of urban transportation’,” @TBD, 16 February 2012] The article is accompanied by an interesting video. Even though shared electric or compressed air vehicles would cut down on pollution (and presumably the number of vehicles travelling on city streets), they are still basically personal automobiles. Most urban planners would like to see more public transportation built and other forms of transportation used.

“Governments have tried to get people out of their cars and onto public transport such as trains, trams, buses and metros, as well as using non-polluting bicycles. Unfortunately, this has mostly proven to be unsuccessful. At least partly to blame here are poor connections between different modes of transport, longer traveling times and delays, as well as a lack of comfort and privacy. Designers and engineers are now exploring new public transport concepts, which are more capable of competing with the car by offering quicker, and in some cases individualized, transportation, as well as introducing a new range of personal city vehicles.”

Schilperoord’s article is packed with pictures of some of the concepts designers have come with including flying trains, maglev personal monorail pods, electric vehicles that remind you of a ride at Disneyland, and new kinds of buses. Ian J. Faulks, Julia Irwin, Richard Howitt, and Robyn Dowling believe that too much attention is being given to the middle part of public transportation and not enough to the beginnings and ends. They note that one shortcoming of most public transportation schemes is that “people are reluctant to walk the ‘first and last mile’.” [“Electric unicycles, minifarthings and the future of urban transport,” Climate Spectator, 8 May 2013] They’re correct. If you can’t conveniently get people to and from public transportation, they won’t use it. That’s why the authors conclude, “Personal mobility devices, or PMDs, are worth a fresh look as a solution to urban travel.” They describe a number of one-, two-, and three-wheel PMDs in their article. Fortunately, for inner city dwellers, convenience isn’t as great a challenge because most embark/debark locations for public transportation are within easy walking distance. The further out from the inner city that a resident lives the more acute the problem becomes.

I agree with Fishman that it will be a combination of ideas that helps solve the urban transportation challenge in the future. It will be interesting to see which concepts will prove to be winners. The one thing that almost all urban planners agree upon is the fact that the car culture, as currently understood, is not a sustainable alternative for urban transportation in the decades ahead.