Home » Artificial Intelligence » Smart Machines and the Future of Work 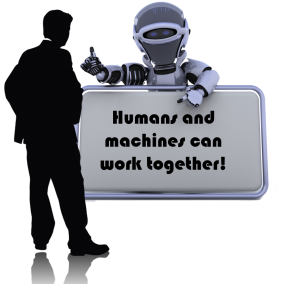 Smart Machines and the Future of Work

Artificial intelligence (AI) and robotics are raising grave concerns about the future of work. Julia Bossmann (@juliabossmann), President of Foresight Institute, believes unemployment caused by smart machines is one of the most pressing ethical questions of our time. “Most people still rely on selling their time to have enough income to sustain themselves and their families,” she writes.[1] Axel Bugge (@reutersAxelB) reports, “Investors believe it is ‘inevitable’ that artificial intelligence will destroy millions of jobs and that governments are unprepared for such an impact, according to a [recent] survey.”[2] Frank Wammes (@fwammes), a business technologist, adds, “Robots will take over 6 percent of jobs in USA by 2021, says a recent report by Forrester. Oxford University is even going as far as to say that by 2035, up to 47 percent of our jobs are at high risk of being automated. If that number doesn’t have an impact, imagine this: by the time the current generation of infants legally reaches adulthood, they will have done so in a world where nearly half of our current jobs may be automated.”[3]

Are those dire predictions inevitable? The answer is ambiguous. Yes, jobs will be lost to automation. Tom Vander Ark (@tvanderark), CEO of Getting Smart, explains, “Automation will eat employment. That warning has been issued at every turn in history, with the printing press, the advent of electricity and the rise of robotics. Phases of automation, and the new trade patterns and agreements that accompany them, destroy jobs that involve repetitive tasks while creating new jobs.”[4] Many pundits assert that this latest wave of automation will be so extensive that not enough new jobs will be created to provide full employment. In my opinion, a future characterized by chronic high unemployment would be disastrous. Machines don’t consume the goods they produce like human workers; which means the global economy could crash. Some analysts recommend providing the unemployed with a universal basic income to avoid this result. I’m not convinced that is answer.[5] I agree with Voltaire who wrote, “Work saves a man from three great evils: boredom, vice, and need.” The question is: How do you create meaningful work in an era of automation?

The answer many pundits are proposing is the development of smart machines that work with rather than replace humans. “Humans are more likely to work with smart machines in the digital enterprises of the future than be ousted by them,” writes Charles McLellan (@charlesmclellan), “but the possibility of economic and social disruption needs to be on the political agenda.”[6] Vander Ark reports that Mustafa Suleyman, co-founder of DeepMind, agrees with that position. Vander Ark writes, “Suleyman predicts that humanity is still ‘many decades away from encountering that sort of labor replacement at scale.’ Instead, the technology is best used to help humans with work-related tasks rather than replace them outright.” In a letter to the editor of the Financial Times, Earl Yardley, Director of Industrial Vision Systems, optimistically stated his belief that human/machine collaboration will emerge as the primary working environment in the future.[7] “From our own experience,” he wrote, “we use robots to work collaboratively with humans who are then redeployed to higher-value tasks that the robot cannot do — not the other way round.”

A future characterized by human/machine collaboration will not emerge naturally. That future will have to be carefully orchestrated; however, the effort it will take to create such a future could pay enormous dividends. A recent study published by Stanford University asserts, “As AI substitutes for human roles, some jobs will be eliminated and new jobs will be created. The net effect on jobs is ambiguous, but labor markets are unlikely to benefit everyone evenly. The demand for some types of skills or abilities will likely drop significantly, negatively affecting the employment levels and wages of people with those skills.”[8] Clearly, some retraining and reskilling will be necessary to keep the workforce fully employed. Some experts point out, however, that creating a collaborative future should be easier than creating a future in which machines replace humans.

Robots still have a difficult time working in a complex environment and, even if we don’t recognize it, most day-to-day working environments are complex. Sarah K. White (@sarahkwhite) explains, “Our day-to-day environments are complex. For example, your desk probably looks nothing like your coworker’s desk. You might have similar objects, like a chair, computer or coffee mug, but they probably aren’t in the same location or even the same shape, size or brand. That means, a robot can’t be trained to just understand a desk as a predictable environment. The robot has to take in every object on the desk, whether it’s a pen, laptop or coffee mug in order to just understand how to do something as simple as pick up your mug, before it can even dream of pouring you a fresh cup of joe.”[9] Although a smart machine may have a difficult time assuming all of the tasks a worker might complete, it can remove some of the more tedious burdens from off the worker’s plate.[10]

In another article, Vander Ark reports that the futurist Peter Schwartz (@peterschwartz2) told participants at a recent conference, “It’s wishful thinking to believe that human intelligence adds value in every application, but the ability to work alongside machines will be an increasingly essential and widespread skill set.”[11] It a skill set we need to be teaching our children as well as every worker displaced by automation. Vander Ark continues:

“Schwartz believes that this fifth wave of automation, like the prior waves, will create rather than destroy jobs. Labor-saving technological change displaces certain job tasks, while over the long run generating new products and services that raise incomes. New artisans will combine technology and interpersonal tasks to offer uniquely human services. Tasks that cannot be substituted by automation are generally complemented by it, raising the value of the tasks that human workers uniquely supply. However, the transition won’t be smooth. Automation will affect almost all jobs, transforming entire business processes and redefining roles.”

Schwartz’ bottom line is this: “We need to help young people develop uniquely human skills — abstract, creative, nonroutine tasks.” We also need to teach those skills, along with more technical skills, to workers who have been displaced by technology.

The world could become a bleak place if automation results in mass unemployment that spurs social unrest and economic turmoil. Such a future is not inevitable. Stressing training and skill sets that make workers more employable and developing technologies that augment rather than replace the human workforce, we can create a bright future and growing global economy.