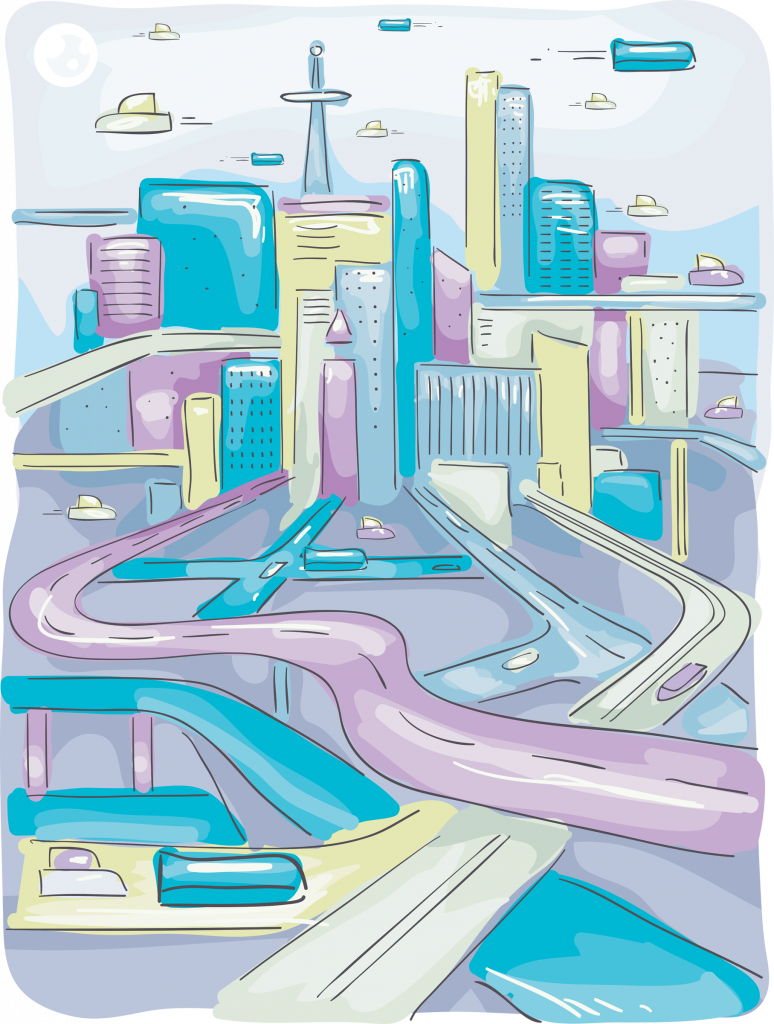 “Every mayor wants their city to be ‘smart’,” writes Eleanor Cummins (@elliepses), “but harder is doing what it takes to increase the IQ of inanimate infrastructure, or finding the money or people to make it possible.”[1] We’ve all viewed futuristic science fiction films depicting flying cars, autonomous vehicles, smart advertising, and dozens of other futuristic technologies. The question is: How realistic are these depictions of future smart cities? There are a number of smart cities being built from the ground up — such as, Masdar in the UAE, Songdo in South Korea, and PlanIT Valley in Portugal. None of them approaches the scenes depicted in science fiction movies. The underlying objectives of the smart city movement are using resources more efficiently and improving the quality of life for urban dwellers. Cities don’t require flying cars to achieve those objectives; although, reducing urban traffic congestion is certainly one goal.

Urban traffic congestion became an issue for Elon Musk (@elonmusk) after being stuck one too many times in Los Angeles traffic. He tweeted, “Traffic is driving me nuts. Am going to build a tunnel boring machine and just start digging…” He wasn’t kidding. He started to drill. Jackie Snow and Cody Boteler (@codyboteler) report, “Musk released a video [see below] showing how the tunnels could work with street level traffic, with entrance and exit elevators to the tunnel network that have a footprint about the size of a parking space. Currently, boring tunnels can cost up $1 billion per mile, according to Musk. That’s a prohibitively high price tag for any city — so this won’t be an immediate development.”[2]

Another tunneling project Musk claims to have verbal approval for is a hyperloop train between Washington, DC, and New York City. Snow and Boteler explain, “Theoretically, a hyperloop train could reach speeds that surpass 600 mph – faster than some commercial airliners.” They note Musk has been conducting above ground tests in Nevada. “The next goal is testing that can reach 250 mph. … The hypothetical D.C. to New York Hyperloop would likely be underground, according to Musk. This would limit disruption and noise to the residents along the corridor, especially if it’s tunneled deep below the surface — it would, theoretically, be hard to detect. While such a large infrastructure project would revolutionary, it would also be logistically complicated – and include looping in city, state and federal officials.”

Transportation isn’t the only urban area in which Tesla could have an impact. He is also deeply involved in solar energy. Snow and Boteler report one of Musk’s companies, Solarcity, “unveiled a glass solar roof in different styles like Tuscan and slate … and more traditional panels that can be put on existing roofs. The new systems are designed to integrate with company’s home battery, the Powerwall, which can hold electricity generated from solar panels – guaranteeing power overnight or during outages. Switching to solar-generated electricity, in addition to potentially lowering utility costs for residents, can help detach cities from the vulnerable U.S. power grid.” Of course, Musk isn’t the only entrepreneur proposing smart cities initiatives. In New York City, a group called the Brooklyn Microgrid “is building a peer-to-peer energy market for locally generated renewable energy that is driven by the very community it serves.”[3] Cummins adds, “Brooklynites on the grid can buy green energy from their friends — on the blockchain, the digital currency exchange on which bitcoin operates — at a price they negotiate. They pay only $18.05 to the utility company, which is the minimum required to remain on the central grid in case of emergency. … These types of peer-to-peer microgrids are increasingly essential to cities where full-sized power grids are susceptible to blackouts. They also reduce the amount of energy lost in transferring it from producer to user, and better connect citizens.”

Another technology Cummins believes more cities will come to adopt is sensor technology. She reports that Cambridge, MA, has equipped a number of dump trucks with sensors. “In May, MIT’s Senseable City Lab retrofitted five of the city’s dump trucks with data-collecting sensors. Now, as the vehicles trundle down their route, they pick up not just trash, but important information on everything from energy leaks to air quality. The data is sent back to the city of Cambridge, which can make more data-driven decisions like whether to alter the design of an intersection, or deploy a department official to deal with a blown gasket or burst pipe that might not otherwise have been identified.” Sensors can be mounted on almost any object. Dean Takahashi (@deantak) reports “GE, for instance, has street lights that use more energy-efficient LED lighting. It can instrument those lamp posts with sensors that can collect a lot of data, such as gunfire locations. It can turn that information over to ShotSpotter, which tracks gunfire locations in cities.”[3] He notes that smart street lamp posts can also gather data on traffic, weather, movement of people, pollution, and so forth. “It’s all about driving better management, efficiency, and cost awareness in cities,” he writes, “as well as reducing traffic congestion, lowering crime, and predicting behavior.”

At the heart of most smart cities initiatives is connectivity. Brookings’ analysts, Adie Tomer (@AdieTomer) and Rob Puentes (@rpuentes), bluntly state, “No industry or household in the world, will reach their future potential without access to broadband, it is the electricity of the 21st century.”[4] Cummins reports LinkNYC has put hundreds of free WiFi kiosks on the streets of New York City. “Their units provide free public wifi — a big boon to foreign tourists without international plans — as well as charging ports, public service announcements, and buttons to trigger an emergency response. The LinkNYC system, which is free to users and funded by advertising, is just one example of how public wifi can really work and the impact connectivity can create. Free internet access is seen as a boon to tourism, a way of coordinating disaster relief and emergency response, and even a tool for education. It can also generate enormous amounts of data when passersby log on, which can in turn be used by cities (and, of course, corporations) to better understand residents and their needs.” Steve Alexander, Senior Vice President and Chief Technology Officer at Ciena, adds, “A useful ‘smart city’ requires that the city services be connected and automated wherever possible via a strong, resilient, secure network.”[5]

Smart cities initiatives must be grounded in reality if they are going to succeed. Alexander concludes, “I personally put the most faith in those initiatives that have determined what they want ‘smart’ to accomplish whether it be zero net water consumption, becoming energy neutral for the public infrastructure, reduction in commute times or improving services like refuse collection. Defining and agreeing to measurable goals is a key milestone in a city’s journey to becoming ‘Smart’.” Although it’s nice to dream and aspire, dreams are normally achieved one step at a time. It’s too early to tell whether Musk’s big ideas will come to fruition. In some ways it doesn’t matter. His ideas and his experiments will undoubtedly prove of value as we move towards creating smarter cities.