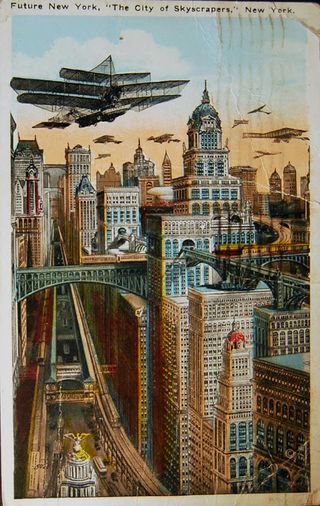 “If you work for a young web company,” writes Jasmine Gardner, “you probably think your office is pretty cool. Maybe it has a pool table or even a roof terrace. Pah! Give it 37 years and, according to engineering company Arup, our office blocks will contain working farms, produce their own energy, be linked together by suspended green walkways and sections of each floor will be removable, upgradable and replaceable.” [“Smart cities: what urban life will be like in 2050,” London Evening Standard, 4 March 2013] Sounds exciting doesn’t it? Well, don’t get too excited. Futurists tend to exaggerate how much things will change in the future and seldom are their predictions fulfilled. The attached 1925 postcard is a good example of two things. First, buildings last a long time. You can easily see recognizable New York City buildings that are standing today. Even though a few high profile buildings had been added to NYC skyline by 1962 (37 years after the postcard was printed), people traveling forward in time would still have been able to walk down the streets of New York and recognize where they were. The second point, is that the details are nearly always wrong. Aircraft never looked like those depicted; elevated trains never ran skyward through buildings; and so forth. Obviously, futurists don’t get everything wrong; but, if they were given a letter grade for the bulk of their predictions they would probably get a “D.”

Having said that, I really don’t fault the futurists. Their job is to look at what’s possible not really predict the probable. Everything that the Arup company predicted is possible. Buildings like those described probably will be built, but not a lot of them. I predict that if you travel forward in time 37 years to 2050, you would be able to walk down the street of any major city that exists today and find your way around using landmark buildings that are already in place. Cities change slowly — at least established (i.e., brownfield) ones.

There are new cities being built, however, especially in the developing world. How those cities are built will make a huge difference in the lives of millions of future citizens. It is in those cities where one might see the kinds of buildings predicted by Arup. Gardner continues:

“This is the building of the future, imagined in a report released [in March 2013] by Arup’s ‘Foresight + Innovation’ arm. It is just one example of the elements that will make up our ‘smart cities’ of the next age. ‘Smart cities’ is the buzz phrase of the moment. It refers to energy-efficient and spacially economical urban worlds in which we’ll live in years to come — all thanks to technology. Smarter cities are now a focus of both big business, such as Shell and IBM, and small entrepreneurs and scientists, such as the Dutch microbiologists who have developed a self-healing concrete. Cracks in the buildings of the future will be filled by calcium carbonate, produced by a bacteria feeding on nutrients, both incorporated into the cement. The bacteria are only activated when rainwater gets into a crack.”

Some older buildings will undoubtedly be retrofitted with smart technologies to make them more efficient and others will gain new life by housing urban farms or 3D manufacturing plants; but, only in newly constructed cities are you likely to find “from-the-ground-up” smart technologies built into every building. Nevertheless, it remains important for urban planners and engineers to keep developing concepts. You never know when a true breakthrough will occur that will help us cope with the 9 billion people who will inhabit the planet in 2050 (most of whom will live in cities). Rick Robinson, executive architect for the IBM’s Smarter Cities initiative, told Gardner, “In the West we’ve become accustomed to building cities outwards around cars. If more people fall into that lifestyle we’re going to exhaust the world’s resources very, very quickly.” Robinson recognizes that it is the new urban dweller coming to live in newly constructed cities that will in large measure hold the key to planet’s future.

But city dwellers living in brownfield cities are also going to put pressure on resources and energy. Adam Newton, a project manager for the Strategy and Scenarios team at Shell, told Gardner, “By 2050, between 70 and 80 per cent of the world’s population will live in cities. How and where people consume energy will be very important.” Frankly, I’m much more concerned about the future of brownfield cities than those that are yet to be constructed. Here are a few reasons why. Old water pipes leak. Sanitation systems are being overwhelmed (if they exist at all). Transportation patterns are mostly established. Inefficient electric grids are already in place. Finally, many of the building that will be around in 2050 are already built. Smart people and enlightened politicians are going to have to work with private enterprise if we want things to change for the better in many of these brownfield cities. Gardner continues:

“For IBM, smarter cities mean ones that harness data. It is already creating space on the cloud to share information such as water flow and distribution. ‘By managing pressure on a water distribution network, you can serve additional houses without needing to expand the system — allowing you to support a growing population without spending hundreds of millions of pounds on infrastructure,’ explains Robinson. Intelligent traffic lights are also high on the agenda. ‘In Singapore and California we’ve used technology that can make predictions that are 85 per cent accurate about how traffic is going to develop over the next hour,’ he says. In future the light sequencing might change automatically. For Shell, it’s all about energy efficiency. ‘The low energy prices that drove cities to sprawl may not exist in 20 years. Fewer roads and better integrated public transport is likely to be the way forward,’ says Newton.”

But better and more integrated public transportation systems costs money (which cities don’t have) and will only be sustainable if the cultural mindset of urbanites and suburbanites change significantly. Rick Robinson bluntly states, “No-one is going to pay cities to become Smarter.” [Sustainable Cities Collective, 30 November 2012] He goes on to discuss “four ways in which money is already spent” and then recommends way “to harness that spending power to achieve the outcomes that cities need.” He concludes, “We should not wait for new, large-scale sources of Smarter City funding to appear before we start to transform our cities – we cannot afford to; and it’s simply not going to happen. What we must do is look at the progress that is already being made by cities, entrepreneurs and communities across the world, and follow their example.”

The economic sector that is most likely to see deep penetration of smart technologies is the electric utility sector. Gardner reports, for example, that the U.S. energy data analytics company Intelen has begun a project “which monitors energy usage in office blocks with smart meters and has created a social gaming application where employees compete for low-energy scores.” That’s a great initiative because it addresses both technology and culture. Gardner admits that “these don’t seem [like] outlandish developments,” such as those described in the Arup report, and she wonders if its “futuristic building [is] just science fiction.” Josef Hargrave, the author of Arup’s report, acknowledges that some of the predictions made in the report are unrealistic (like the flying robots which remove and re-insert building sections), but he believes that smart electricity grid integration is very realistic. Having said that, Hargrave told Gardner that “all the ideas are based on current prototypes and development — flying robots are actually being developed in Zurich, Switzerland, and can build a six-metre tower out of foam bricks.” Gardner concludes:

“Given the exponential rate of technological advancement, it’s not hard to fathom that skyscrapers coated with photovoltaic paint will indeed come to pass — and sooner than you think. Indeed, the floors of Arup’s building occupied by algae-filled biofuel pods are not unlike a current project by French biochemist Pierre Calleja. He is building algae street lamps that eat up CO2 in the atmosphere. Combine this with another algae lamp that produces its own light using energy created by photosynthesis and you get self-powered, anti-pollution street lamps. Researchers at the University of California Los Angeles (UCLA) just announced their creation of a graphene supercapacitor — essentially a battery but one that charges up to 1,000 times faster than the normal kind, and that can be composted. The future promises instant phone chargers and petrol stations with plugs that can charge cars faster than they currently fill up on unleaded. … The real smart aspect may come down not to the technology which we know exists but to foresight and willingness to change. ‘There have to be new models of collaboration for businesses and decision-makers in cities and government to have the positive impact we know the technology could support,’ says [Shell’s] Newton. The city that leads in this department may just end up the smartest in the class.”

Cities will change over the next 37 years. Change is inevitable. Whether that change is good or bad remains to be seen. The one thing that worries me most is the fact that almost all Smart Cities initiatives address problems associated with connected citizens. Many of today’s largest cities have large, unconnected ghettos associated with them. Individuals who live in those ghettos are survivors; but, getting them connected to grids and networks would make their lives much more productive and their futures much brighter. In all the talk about smart cities, we can’t forget about them.