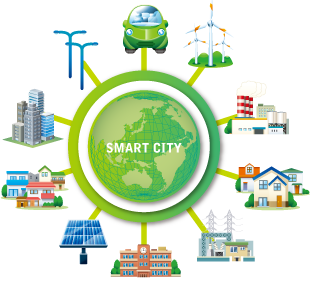 A course given at MIT examines a normative model which claims a city is analogous to a living organism.[1] The course description notes, “The theory of the organic city rests on a number of assumptions about the nature of organisms. Among these is the assertion that an organism is an autonomous individual, and that it has a definite boundary and is of a specific size. It does not change merely by adding parts but through reorganization as it reaches limits or thresholds. It contains differentiated parts but form and function are always linked. The whole organism is homeostatic, self-repairing and regulating toward a dynamic balance.” In a broad way, that description is a fitting description of a city; however, today’s urban environment is more often regional than confined to “definite boundary and of a specific size.” The model acknowledges this reality. “Often the organic idea is extended regionally to connect settlements to valleys, trails, and other extended natural systems. There is an attraction to small-scale modes of production or services as opposed to large-scale synthetic processes. Often the model aligns itself with a socio-economic philosophy that sees increases in urban value as the result of communal rather than individual endeavor.” Efforts to create a so-called “smart city” often bump up against opposition forces who perceive such efforts as antithetical to cultural or communal norms — all the things that make a city unique. The question is: Do smart city projects dehumanize urban living?

Urban development strategist Eric Anthony Johnson (@Eanthonyjohnson) believes there is value viewing cities as living organisms. He writes, “Cities are often compared to living organisms. Like living organisms, cities must evolve and adapt to survive in an ever changing world. A city’s choice is simple, evolve and adapt or perish. When I say perish, I am referring to succumbing to the pressures of market forces, inequality and competition with other cities. A city must be cognizant of its need to evolve. It will become irrelevant as a place to attract talent, jobs and resources if it chooses not to do so. There are countless examples of cities that once were centers of economic activity. They are no longer relevant due to their inability to evolve. There are also examples of cities that have evolved and are seen as the leading contenders for economic growth.”[2] Many urban planners argue that cities must adapt to the Digital Age if they are to survive and thrive in the years ahead. This belief spawned the smart cities movement. With the majority of the world’s population already living in urban areas, and with more people moving to cities every year, city planners must figure out how to maximize the efficient use of resources and optimize living conditions for citizens. This cannot be achieved without a system of systems approach.

A City is a Complex System of Systems

V. Srinavas Rao, Chairman and Managing Director at BT & BT, explains, “Smart City is nothing but the fusion of many FUNCTIONAL Systems — [a] System of Systems. Building a Smart City is like playing a Symphony and requires orchestration of many instruments. This means an integrated framework is needed for smart cities, where, [a] functional system must perform on its own and integrate with other functional systems to provide faster, better, steadier and cost-effective services to all stakeholders. [A smart] city must move away from siloed department[s] to integrated System of Systems thinking.”[3] IBM believes “people” are one of six core systems smart cities must optimize and integrate. The other five systems are: business; transport; communication; water; and energy. I would add a seventh system — waste management (which includes both trash and sanitation). The ecosystem that will optimize and integrate these diverse systems involves sensors, the Internet of Things (IoT), and cognitive computing. Sensors will generate data which will be transmitted via the IoT to a cognitive computing platform where it will be integrated and analyzed resulting in insights and actions. At least that’s the idealized version of how smart cities could work.

Gianni Minetti, CEO, Paradox Engineering, argues interoperability is crucial in smart cities. He asserts, “Interoperability is a big issue for city innovation. The siloed approach that still exists in urban services management leads to fragmentation, complexity and increased costs, as well as missed opportunities relating to efficiency, service optimization and quality improvement, good practice and data-sharing.”[4] He asks, “Why should your city implement one system to manage streetlights, a separate infrastructure for parking facilities and mobility, another one for video surveillance, yet another for public Wi-Fi, and so on?” Good question. Integration begins with connectivity; which, in the case of cities, means the Internet of Things (IoT). Russ Sharer, founder and principal of Sharer & Associates, notes, “Creating smarter cities requires a smarter integration strategy. Any community seeking to add smart, digital systems controls is going to need a scalable, stable communications infrastructure capable of handling IoT data traffic.”[5] He suggests “smart outdoor lights with wireless IoT controls integrated into LED drivers is the logical first step.”

Journalist Nick Huber (@nickahuber) reports, “Our cities are becoming more connected by the day. Around the world, cities are using the Internet of Things, fifth generation mobile networks and artificial intelligence technologies to cut traffic congestion, improve public safety and protect the environment. IoT devices monitor sewers, air quality and rubbish. Smart street lamps save energy by tracking pedestrian volumes, while sensors on roads and bridges monitor vibration and humidity for damage.”[6] James Carlini (@JAMESCARLINI), an intelligent infrastructure strategist and President of Carlini and Associates, insists cities must turn to smart infrastructure to prosper. He explains, “All municipalities around the country need to be concerned with this as it is a matter of economic survival and extending their viability into the 21st century. It is not a frill issue or one specific to one region. As we move forward, municipalities need to compete with one another to entice corporations and other organizations to develop new facilities and create jobs for their region. The one thing they need to have is a solid and smart infrastructure which includes adequate and redundant power and broadband connectivity so there is no single-point-of-failure.”[7] Adie Tomer (@AdieTomer), a fellow at the Brookings Institution, and Rob Puentes (@rpuentes), President & CEO of EnoTrans, bluntly state, “No industry or household in the world, will reach their future potential without access to broadband, it is the electricity of the 21st century.”[8]

W. Jarrett Campbell, Global Industry Marketing Director at AVEVA, writes, “Infrastructure provides a critical connection to businesses, communities, people and quality of life on a global scale. It drives economies across the world. In order to stay competitive, every nation must move people, goods and data efficiently while delivering energy and water resources in a safe, reliable and sustainable manner.”[9] In order to achieve those desired goals, Campbell insists, “There is now a greater need than ever for: Seamless integration between systems, sites, people and assets; improved operational efficiency and reduced energy cost; adherence to various security, cybersecurity, safety and regulatory compliance; [and,] not just delivering on service-level agreements, but exceeding expectations. To accomplish this, infrastructure operators must extend their sights beyond traditional key performance indicators (KPIs) and monitoring real-time operations. They must leverage the latest technological advancements in data, analytics, advanced visualization and workflow management capabilities to ensure sustainable innovation through digitalization. … A system of systems integration approach can break down data silos, promote cross-functional collaboration and optimize the ability of cities to make faster, more informed decisions and speed crisis response.”

“Smart cities are no longer a utopian dream of the future,” writes the editorial staff of IT-Online. “Thanks to a slew of innovative and game-changing technologies, they are already active and growing quickly. Smart cities could be described as the junction between three main areas, namely digital transformation, environmental sustainability and economic performance. They can be described as a framework made up of connected technologies, designed to address the challenges of rapid urbanization and promote more sustainable, smarter practices.”[10] If a system-of-systems approach is used, the system at the center should be people. Today, the greatest concern expressed by many opponents to smart city projects is the loss of privacy. By bringing all stakeholders to the table in an effort to develop a holistic smart city strategy, technology does not have change a city’s uniqueness or make it assume the role of big brother. The focus should always be on making cities more livable, affordable, and sustainable.