In a post entitled Minorities and Entrepreneurism, I wrote, “Although women are not minorities per se, they have been in the minority when it comes to starting businesses that make it big.” After that post was published, blog reader Liz Nutt, who works with Accountingdegree.com, emailed me and indicated that her company had published a post entitled “15 Female Entrepreneurs Who Are Incredibly Inspiring.” She thought it might make a good follow-up post. She was correct. The introduction to the post reads:

“Opening up your own company poses all sorts of obstacles, no matter your gender. But some women — in this country and overseas — encounter even more challenges depending on their community, education, competition and culture. Here are 15 female entrepreneurs from the past and present who are incredibly inspiring for their creativity, cleverness and courage.”

Some of the entrepreneurs discussed in the post are household names, like Oprah Winfrey, Diane von Furstenburg, Estee Lauder, and Mary Kay Ash. Most of the entrepreneurs on the list aren’t as well known; but their stories are no less inspirational. Take, for example, Madam C.J. Walker: 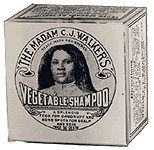 “In a speech given to the audience at the National Negro Business League Convention in 1912, inventor Madame C.J. Walker summarized her rise to business success by saying she was promoted from the cotton fields to the washtub to the cook kitchen — until she took her career and livelihood into her own hands by starting a manufacturing business. Born in Louisiana to former slaves, Walker was an orphan at six, a wife at 14, and a mother soon after. Inspired by a dream she’d had to start a cosmetics and hair-care line for African American women, Walker used the $1.25 she had saved to fund her new business. After selling her products door-to-door, Walker’s company eventually grew to serve customers around the world, making her the first self-made woman millionaire in the country.”

Ms. Walker may be the individual most responsible for the multi-billionaire dollar African-American haircare business. Want to learn more about that business? Watch Chris Rock’s documentary entitled “Good Hair.” It’s both hilarious and informative. Another early, inspirational female entrepreneur was Nellie Cashman.

“Cashman earned many nicknames during her life as a frontier woman, traveling between Western mining camps — Miner’s Angel, The Angel of Tombstone and Saint of the Sourdoughs are just a few. Irish-born Cashman moved to San Francisco from Boston with her sister in 1869 and first worked as a cook in mining camps until she could afford to open her own boarding house in Nevada, just three years later. For the next phase of her life, Cashman traveled around the North American West, opening restaurants and boarding houses while supporting the local communities through charitable projects with churches and the Salvation Army and giving out free cigars to her mining customers.”

Although Ms. Cashman never married, following her sister Fannie’s death, she raised Fannie’s five children in addition to watching after her business interests. Not all pioneers on the Accountingdegree.com list are associated with America’s old west. There are modern pioneers as well. One of them is named Kamila Sidiqi, an Afghani entrepreneur.

“In a country where women entrepreneurs aren’t just scarce, but extremely controversial and sometimes in danger of practicing their business, Kamila Sidiqi isn’t just quietly setting up her own shop. Instead, the dressmaker is helping other Afghan women develop their own companies, too. Left alone by a father and brother who fled the Taliban, Sidiqi helped her siblings, who in turn helped her start her business by teaching her to sew and taking her on potentially violent expeditions to buy supplies. Now, Sidiqi runs a consultancy firm supporting women entrepreneurs in her area.”

To learn a little more about Ms. Sidiqi, read an NPR article entitled “In Kabul, A ‘Dressmaker’ Sows Entrepreneurial Seeds.” Other inspirational female entrepreneurs highlighted in the Accountingdegree.com post are: Ashley Qualls, who started a company “that helped teens design their own MySpace pages and learn graphic design”; Caterina Fake, who co-founded Hunch and Flickr; Judi Henderson-Townsend, who started a socially-responsible business that “sells, rents, recycles, repairs and blogs about mannequins”; Sara Blakely, who started “the SPANX line of slimming apparel and undergarments”; Ishita Khanna, a young entrepreneur who started a company that “focuses on eco-travel, organic crops and conservation as its principle projects” in remote Himalayan villages; Lauren Bush, who co-founded FEED, a company’s whose products are “made from environmentally sound materials, using fair-labor production and artisan-made materials; Ama Pomaa Andoh, who founded the “Ghana Young Women Social Entrepreneurs, a resource center for women who want to learn how to start their own business”; and Deborah Meaden, “a successful investor and marketer in the UK.”

“Revenue at such concerns rose significantly in 2010, with much of the growth coming from the burgeoning business-technology field, according to an annual ranking by trade group Women Presidents’ Organization. On average, private U.S. companies on the list—all of which were either founded by women or have female CEOs—posted annual revenue of $82.7 million, up from $45 million in 2009.”

Despite those impressive figures, DeBaise indicates “that women-led business may still be having trouble accessing start-up capital. None are venture-funded and less than one-fifth used bank loans or lines of credit to finance operations.” DeBaise provides a brief overview of the top three companies on the list:

“This year’s No. 1 is BrightStar Franchising LLC of Gurnee, Ill., which supplies home health-care staffing at more than 200 locations in 36 states and Canada. It’s grown to nearly $100 million in annual revenue since its 2002 launch. Next in line are two providers of workplace-technology systems, Sierra Nevada Corp. of Sparks, Nev., and Rose International Inc., of Chesterfield, Mo., coming in at No. 2 and No. 3, respectively.”

If you click on the link to the article, you can find an interactive feature that permits you to view a list of all 50 companies. According to DeBaise the list was compiled by the “Women Presidents’ Organization, a peer-advisory group for multimillion-dollar women-owned businesses.” The group “determined the Top 50 Fastest-Growing Women-Led Companies using a formula that combines percentage revenue growth and absolute growth. “To be eligible for the list, companies must be privately owned, women-owned or led, and have generated at least $500,000 in annual revenue in 2006 and $2 million by year-end 2010, among other criteria.” DeBaise concludes:

“Although women-owned firms have improved in terms of performance, they still trail male-owned firms, according to national statistics. Only 3% of all women-owned firms have revenues of $1 million or more, compared with 6% of men-owned firms, according to the Center for Women’s Business Research, a McLean, Va., nonprofit. WPO and other women’s business groups say female-led companies continue to face barriers when it comes to raising money, particularly in the area of venture capital. Securing ‘venture capital and equity investors is a networking process, and it’s harder for women to get into that network,’ [Marsha Firestone, WPO’s founder and president,] said. Instead, women often find ‘alternative means’ to grow their businesses, such as through bootstrapping or redirecting profits back into the business, she said.”

Culture undoubtedly presents significant barriers to women that prevent them from thriving in the business sector. Slowly, however, men are beginning to realize that humankind will never achieve its full potential without the full participation of women. We will never know how much further advanced the world would be had women received the freedoms, opportunities, and recognition they deserved in the past. In this case, the past should not be prelude to the future. Joseph Conrad once wrote, “Being a woman is a terribly difficult task, since it consists principally in dealing with men.” It’s probably time that men stop blocking the door of opportunity and let women through.