Home » Business » When Did Trying to Do the Right Thing in Business, Become a Bad Thing? 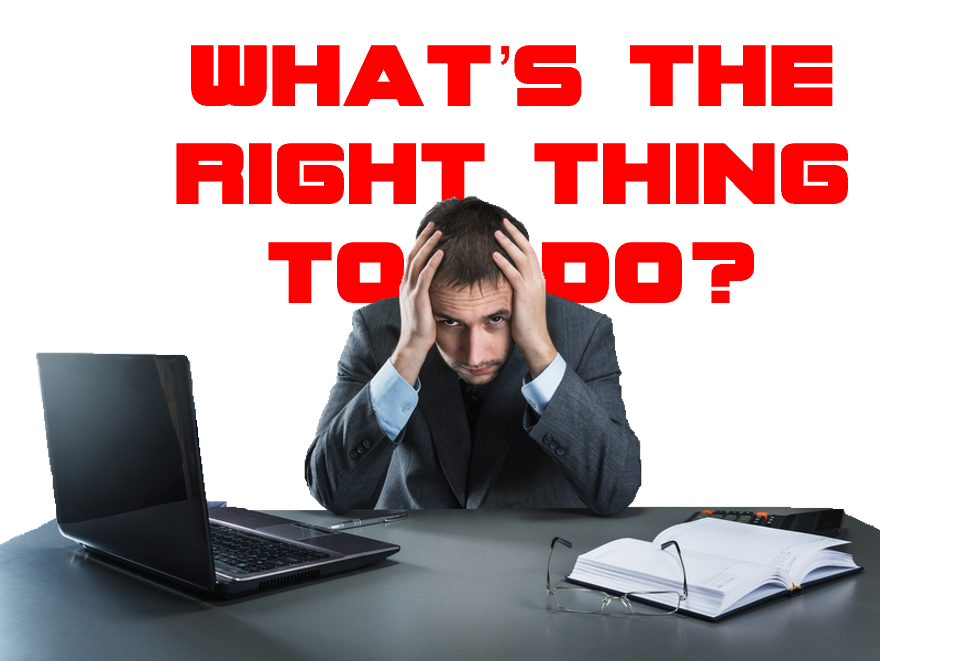 There was a time when character in politics and business mattered. A time when trying to do the right thing was admired more than partisanship or ideological purity. In today’s vernacular, this is called ethical leadership. The staff at Western Governors University explain, “Ethical leadership is defined as ‘leadership demonstrating and promoting ‘normatively appropriate conduct through personal actions and interpersonal relations.’ When you boil it down, this really means that ethical leadership is defined as putting people into management and leadership positions who will promote and be an example of appropriate, ethical conduct in their actions and relationships in the workplace.”[1] But times have changed. Here’s the problem. What does it mean to promote normatively appropriate or ethical conduct? What’s normative and what’s appropriate? John Danaher (@JohnDanaher), a Senior Lecturer at the School of Law at University of Galway, explains, “When we look back at the beliefs and practices of our ancestors, we are often shocked at what they found morally acceptable: the public torture of criminals, the trading of slaves, and the subjugation of women.”[2] As business leaders struggle with ethical leadership, their attempts to do the right thing often makes them victims of today’s culture war.

The Perils of Trying to Do the Right Thing

Business leaders today understand that trying to do the right thing can place targets on their back. They often find themselves facing activist investors and consumers who want them to beef up their Environmental, Social, and Governance (ESG) activities to help address climate change, social injustice, and human trafficking. At the same time they often face extremists, who believe ESG activities are part of some larger conspiratorial effort. Companies trying to do the right thing are now often labeled as “woke.” A term that gained popularity on the left beginning in the 2010s. Wikipedia notes, “It came to encompass a broader awareness of social inequalities such as sexism, and has also been used as shorthand for American Left ideas involving identity politics and social justice, such as the notion of white privilege and slavery reparations for African Americans.”[3] As a result, politicians on the right have decried the woke movement. For example, Florida Governor Ron DeSantis recently declared, “At the end of the day, we are not going to let this state be overrun by woke ideology. We will fight the woke in the businesses. We will fight the woke government agencies. We will fight the woke in our schools. We will never ever surrender to the woke agenda. Florida is the state where woke goes to die.”[4]

Facing pressure from all sides, becoming an ethical leader isn’t as easy as it sounds. Max H. Bazerman (@BazermanMax), the Jesse Isidor Straus Professor of Business Administration at Harvard Business School, argues that today’s ethical leader should be judged on how much value their company creates for society rather than on whether they follow someone’s rule set. He explains, “Leaders answering ethical questions … should be guided by the goal of creating the most value for society. Moving beyond a set of simple ethical rules (‘Don’t lie,’ ‘Don’t cheat’), this perspective — rooted in the work of the philosophers Jeremy Bentham, John Stuart Mill, and Peter Singer — provides the clarity needed to make a wide variety of important managerial decisions.”[5] He adds, “My approach to improving ethical decision-making blends philosophical thought with business-school pragmatism. I generally subscribe to the tenets of utilitarianism, a philosophy initially offered by Bentham, which argues that ethical behavior is behavior that maximizes ‘utility’ in the world — what I’ll call value.”

Many business leaders find themselves confronting ethical questions when dealing with artificial intelligence and supply chain operations. Numerous articles have been written about the importance of ethics in these areas. Data scientist Jayanti Prasad explains, “Artificial Intelligence is no longer the next big thing, it is a big thing in every Industry.”[6] And, where AI must make decisions about safety, ethical decisions are inevitably involved. According to Prasad, “AI-Robotics has been transformed from carrying out repetitive tasks to higher-order decision-making. We have barely started to see AI’s capabilities. In the next decade, AI will likely impact our lives in all possible ways. While we rely on AI to perform our daily needs, what if we go ahead to outsource convoluted thinking and decision-making? Our decisions making capability is based on our consciousness, empathy, and moral standing. When machines perform for us, does it have to take the burden of the complex web of human morality?”

Both Danaher and Bazerman seem to argue that morality is the wrong measure to apply. Danaher notes, “The history of moral change — change in what is, and is not, considered morally acceptable — encourages greater skepticism about our current moral beliefs and practices. We might like to think we have arrived at a state of great moral enlightenment, but there is reason to believe that further moral revolutions await. Our great-great-grandchildren may well look back at us in the same way that we look back at our great-great-grandparents: with a mixture of shock and disappointment.” For his part, Bazerman likely sees “morals” as a set of rules. He explains, “Often people think of ethical leaders as those who adhere to the simple rules I’ve mentioned. But when leaders make fair personnel decisions, devise trade-offs that benefit both sides in a negotiation, or allocate their own and others’ time wisely, they are maximizing ‘utility’ — creating value in the world and thereby acting ethically and making their organizations more ethical as a whole.” Prasad agrees that “morals” might be the easiest, but not the best, way to infuse ethics into AI. He explains, “The most common thing is for AI to follow prescribed rules of morality per defined groups or societies. Imagine buying a basic code of ethics and upgrading it with morality packages depending on your proclivities.”

Supply chain professionals face similar challenges when trying to create an ethical supply chain. Jon Chorley (@chorley_jon), Oracle’s Chief Sustainability Officer, insists, “Most U.S. consumers — and businesses wanting to sell to those consumers — want to ensure that goods and services are sourced ethically and sustainably. A growing segment of consumers have become educated and engaged on Environmental, Social, and Governance initiatives and are letting their activism guide their purchasing behavior.”[7] He supports his assertion by noting, “One recent study [found] 93 percent of consumers surveyed believe that social and environmental issues are more critical than ever, and 88 percent now consider the sustainability impact of both the business and its partners (i.e., its supply chain) before buying from it.” I suspect, if the survey had asked if supply chains should be “woke,” the results would have been different. That’s why trying to avoid loaded terms is so important in a business setting.

Chorley sees added value in supply chains when ethical leaders try to change behavior. He explains, “The goal should not be to cut off suppliers that aren’t operating with the highest code of ethics. … Instead, it’s better for purchasing organizations to bring those suppliers along and align them with their own brand values. This requires understanding where the suppliers are, explaining your goals and priorities, and then engaging with the suppliers to foster continuous improvement.” He concludes, “Businesses can’t afford to overlook any dark practices that may exist in their supply chains.”

When ideologies, partisanship, and loaded language are cast aside, most people believe that doing the right thing is important. As Bazerman argues, it’s important because it adds value to society. He also argues that we shouldn’t fool ourselves into thinking that consistent ethical behavior is the norm. He writes, “Whatever your organization, I’m guessing it’s quite socially responsible in some ways but less so in others, and you may be uncomfortable with the latter. Most organizations get higher ethical marks on some dimensions than on others. I know companies whose products make the world worse, but they have good diversity and inclusion policies. I know others whose products make the world better, but they engage in unfair competition that destroys value in their business ecosystem. Most of us are ethically inconsistent as well.” He concludes, “New ethical challenges confront us daily, from what algorithm to create for self-driving cars to how to allocate scarce medical supplies during a pandemic. … In too many countries, finding collective value is no longer a national goal. Yet we all crave direction from our leaders. … Together we can do our best to be better.” I agree. That’s why I asked: When did trying to do the right thing in business, become a bad thing? Sometime we try and we fail; however, there is no shame in trying to do the right thing.