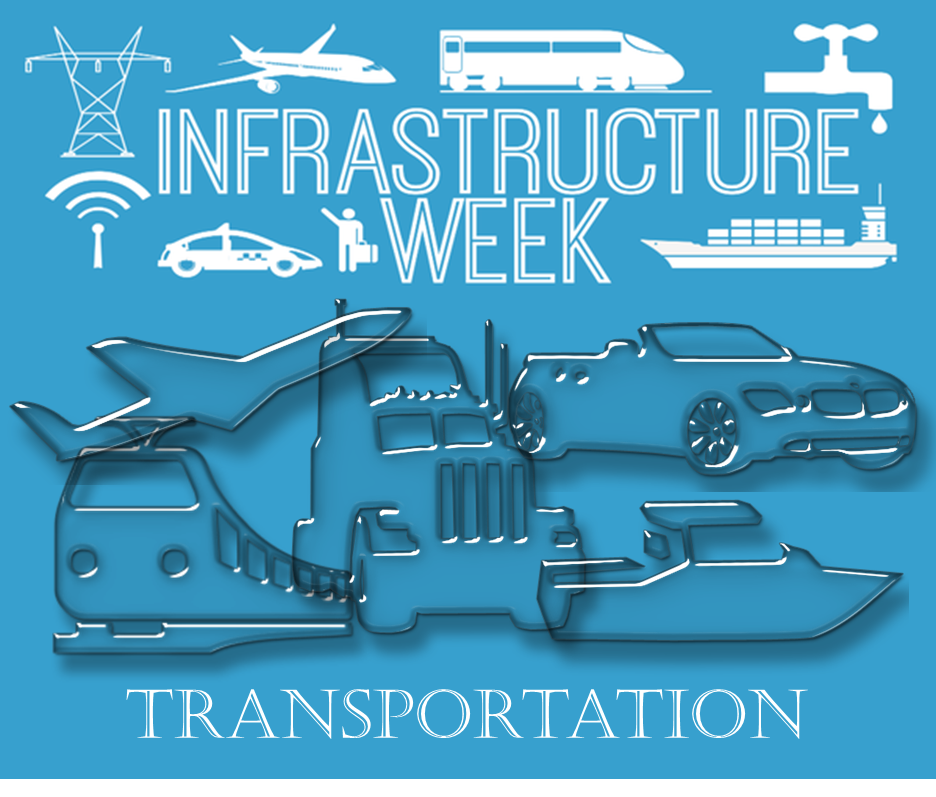 This is the second article in a series of three celebrating the third annual Infrastructure Week. According to the website promoting the week, “Infrastructure Week will bring together thousands of stakeholders in Washington and around the country to highlight the critical importance of investing in and modernizing America’s infrastructure systems, and the essential role infrastructure plays in our economy.” As I noted in the first article, one of Infrastructure Week’s sponsoring organizations is the American Society of Civil Engineers (ASCE). In the organization’s most recent report card on America’s infrastructure, the country didn’t do very well. For its report card, ASCE divided infrastructure into four broad categories: Water & Environment; Transportation; Public Facilities; and Energy. Within those broad categories, ASCE gave grades to 16 sub-categories. The first article focused on Water & Environment. In this article, I will discuss Transportation and the seven sub-categories included in it. They are: Aviation; Bridges; Inland Waterways; Ports; Rail; Roads; and Transit. No other broad infrastructure category affects supply chain operations as much transportation. Logistics lies at the heart of most supply chain operations.

Anyone who has traveled through some of America’s older airports knows that they are looking a little shabby at the edges. One of the reasons, according to the ASCE report card is that they were built during a time when air traffic was much lower. “Despite the effects of the recent recession,” the report states, “commercial enplanements were about 33 million higher in number in 2011 than in 2000, stretching the system’s ability to meet the needs of the nation’s economy. The Federal Aviation Administration (FAA) estimates that the national cost of airport congestion and delays was almost $22 billion in 2012. If current federal funding levels are maintained, the FAA anticipates that the cost of congestion and delays to the economy will rise from $34 billion in 2020 to $63 billion by 2040.” Those figures point out a profound reality when it comes to infrastructure — both opportunities gained and opportunities lost must be included in any calculations about the value of infrastructure. New security procedures since 9/11, coupled with new airline fees and smaller seats, have made air travel much more of a hassle. Add decaying infrastructure into the mix and it’s no wonder that the Aviation sector rates no more than “D”. Andy Pasztor and Susan Carey (@SusanCareyWSJ) report, “A push to radically reshape the outmoded U.S. air-traffic control system is gaining support, as airlines and some labor unions join to back change and a top lawmaker drafts legislation that could effectively privatize services.”[1] Although changing the air-traffic control system has broad support, how to change it remains controversial.

Despite the fact that bridges have become the poster child for America’s crumbling infrastructure, the ASCE report card gives this category a “C+”. “Over two hundred million trips are taken daily across deficient bridges in the nation’s 102 largest metropolitan regions,” the report states. “In total, one in nine of the nation’s bridges are rated as structurally deficient, while the average age of the nation’s 607,380 bridges is currently 42 years. The Federal Highway Administration (FHWA) estimates that to eliminate the nation’s bridge deficient backlog by 2028, we would need to invest $20.5 billion annually, while only $12.8 billion is being spent currently. The challenge for federal, state, and local governments is to increase bridge investments by $8 billion annually to address the identified $76 billion in needs for deficient bridges across the United States.” When a bridge collapses, it makes national news. Too often the news focuses on the number of fatalities involved. The last thing that America needs is a number of “Bridge at San Luis Rey” moments.

When most people think about maritime commerce, they picture bulk and container ships plying the high seas. Seldom do they think about America’s coastal or inland waterways. The ASCE report notes, “Our nation’s inland waterways and rivers are the hidden backbone of our freight network — they carry the equivalent of about 51 million truck trips each year.” In fact, because of highway congestion and a shortage of drivers, some people are hoping to increase traffic on America’s inland waterways. Several years ago, Mark Yonge (@FinFlyer), an advisor with Maritime Transport & Logistics Advisors, told the editorial staff at SupplyChainBrain that “in the next several years, he sees more shippers realizing that these waterways are the intermodal transportation alternative for the future.”[2] That future won’t be realized without some major improvements to America’s inland waterways. The ASCE report explains, “In many cases, the inland waterways system has not been updated since the 1950s, and more than half of the locks are over 50 years old. Barges are stopped for hours each day with unscheduled delays, preventing goods from getting to market and driving up costs. There is an average of 52 service interruptions a day throughout the system. Projects to repair and replace aging locks and dredge channels take decades to approve and complete, exacerbating the problem further.”

Reynolds Hutchins (@Hutchins_JOC) reports, “One-third of U.S. ports need at least $100 million in landside upgrades, both intermodal rail and road connections, to handle projected 2025 freight volumes, according to a report from the American Association of Port Authorities. Where ports will get that money is anyone’s guess.”[3] The ASCE report explains why ports are so important to America’s economy. “The U.S. Army Corps of Engineers estimates that more than 95% (by volume) of overseas trade produced or consumed by the United States moves through our ports. To sustain and serve a growing economy and compete internationally, our nation’s ports need to be maintained, modernized, and expanded. While port authorities and their private sector partners have planned over $46 billion in capital improvements from now until 2016, federal funding has declined for navigable waterways and landside freight connections needed to move goods to and from the ports.”

When it comes to moving interstate freight, national railroads are kings of the road. They are also leaders when it comes to improving infrastructure. A couple of years ago, Michael Grunwald reported, “U.S. freight railroads will get $23 billion worth of upgrades this year, and taxpayers won’t pick up the tab. That’s because the railroads build, maintain and improve their own infrastructure and even pay property taxes on their tracks.”[4] The ASCE report adds, “Railroads are experiencing a competitive resurgence as both an energy-efficient freight transportation option and a viable city-to-city passenger service. In 2012, Amtrak recorded its highest year of ridership with 31.2 million passengers, almost doubling ridership since 2000, with growth anticipated to continue. Both freight and passenger rail have been investing heavily in their tracks, bridges, and tunnels as well as adding new capacity for freight and passengers. In 2010 alone, freight railroads renewed the rails on more than 3,100 miles of railroad track, equivalent to going coast to coast. Since 2009, capital investment from both freight and passenger railroads has exceeded $75 billion, actually increasing investment during the recession when materials prices were lower and trains ran less frequently.” This week’s Amtrak derailment will likely bring with it close scrutiny of America’s rail infrastructure (even though preliminary clues point to speeding as the cause of the derailment).

Every pot hole over which freeway motorists drive is another testament to the state of America’s infrastructure. The ASCE report states, “Forty-two percent of America’s major urban highways remain congested, costing the economy an estimated $101 billion in wasted time and fuel annually. While the conditions have improved in the near term, and Federal, state, and local capital investments increased to $91 billion annually, that level of investment is insufficient and still projected to result in a decline in conditions and performance in the long term. Currently, the Federal Highway Administration estimates that $170 billion in capital investment would be needed on an annual basis to significantly improve conditions and performance.” The advent of driverless and/or cars connected to each other and the Internet of Things could help relieve some of the congestion; but, basic infrastructure maintenance and improvements are still required.

Another way to relieve some of the congestion on America’s roads is to improve public transit, making it both convenient and affordable. According to the ASCE report, “America’s public transit infrastructure plays a vital role in our economy, connecting millions of people with jobs, medical facilities, schools, shopping, and recreation, and it is critical to the one-third of Americans who do not drive cars. Unlike many U.S. infrastructure systems, the transit system is not comprehensive, as 45% of American households lack any access to transit, and millions more have inadequate service levels. Americans who do have access have increased their ridership 9.1% in the past decade, and that trend is expected to continue. Although investment in transit has also increased, deficient and deteriorating transit systems cost the U.S. economy $90 billion in 2010, as many transit agencies are struggling to maintain aging and obsolete fleets and facilities amid an economic downturn that has reduced their funding, forcing service cuts and fare increases.”

In the final article of this 3-part, I will discuss the last two categories for which ASCE provides grades: Public Facilities and Energy.