Vulcanized! — In Search of an AI Mind Meld

In the famous sci-fi series Star Trek, a race of people known as the Vulcans had the ability to meld minds; a technique that allowed two people to share thoughts, experiences, knowledge, and emotions. The most famous of Vulcan was Mr. Spock, who was portrayed by actor Leonard Nimoy. The Vulcan mind meld was a humanoid to humanoid experience. In a mind melding twist, Dmitry Itskov, a 31-year-old Russian media mogul, has founded a project whose aim is to meld human minds with machines by the year 2045. He calls his project the 2045 Initiative. The Initiative’s web site states:

“The main objectives of the Initiative are: the creation of a new vision of human development that meets global challenges humanity faces today, realization of the possibility of a radical extension of human life by means of cybernetic technology, as well as the formation of a new culture associated with these technologies.”

To meet these objectives, Itskov has established a very ambitious timeline. The website describes the timeline this way:

“2015-2020 — The emergence and widespread use of affordable android ‘avatars’ controlled by a ‘brain-computer’ interface. Coupled with related technologies ‘avatars’ will give people a number of new features: ability to work in dangerous environments, perform rescue operations, travel in extreme situations etc. Avatar components will be used in medicine for the rehabilitation of fully or partially disabled patients giving them prosthetic limbs or recover lost senses.

“2020-2025 — Creation of an autonomous life-support system for the human brain linked to a robot, ‘avatar’, will save people whose body is completely worn out or irreversibly damaged. Any patient with an intact brain will be able to return to a fully functioning bodily life. Such technologies will greatly enlarge the possibility of hybrid bio-electronic devices, thus creating a new IT revolution and will make all kinds of superimpositions of electronic and biological systems possible.

“2030-2035 — Creation of a computer model of the brain and human consciousness with the subsequent development of means to transfer individual consciousness onto an artificial carrier. This development will profoundly change the world, it will not only give everyone the possibility of cybernetic immortality but will also create a friendly artificial intelligence, expand human capabilities and provide opportunities for ordinary people to restore or modify their own brain multiple times. The final result at this stage can be a real revolution in the understanding of human nature that will completely change the human and technical prospects for humanity.

“2045 — This is the time when substance-independent minds will receive new bodies with capacities far exceeding those of ordinary humans. A new era for humanity will arrive! Changes will occur in all spheres of human activity – energy generation, transportation, politics, medicine, psychology, sciences, and so on.”

It’s hard to categorize this as an artificial intelligence effort. The initiative begins with the goal of placing human intelligence (i.e., a human brain) into a machine that can keep it alive. Eventually, the Initiative hopes to be able to upload that intelligence into a robot and eventually into a hologram that can live forever. It’s straight out of science fiction. The Initiative’s website concludes:

“Today it is hard to imagine a future when bodies consisting of nanorobots will become affordable and capable of taking any form. It is also hard to imagine body holograms featuring controlled matter. One thing is clear however: humanity, for the first time in its history, will make a fully managed evolutionary transition and eventually become a new species. Moreover, prerequisites for a large-scale expansion into outer space will be created as well.”

The so-called transhumanist movement has embraced Itskov’s efforts. Katie Drummond reports that Itskov is “investing plenty of his own money to kickstart the necessary research.” [“Russian Mogul to ‘Forbes’ Billionaires: Limitless Lifespans Can Be Yours,” Forbes, 19 July 2012] Drummond indicates that Itskov would like the help of world’s billionaires in pursuing his dreams. To that end he has issued an open letter to them. In that letter, Itskov wrote:

“I urge you to take note of the vital importance of funding scientific development in the field of cybernetic immortality and the artificial body. Such research has the potential to free you, as well as the majority of all people on our planet, from disease, old age and even death.”

Itskov told Drummond, “This project is leading down the road to immortality. Nobody wants to die.” To reach the objectives of the Initiative, Itskov has developed a roadmap, an interactive version of which can be found on the project’s website. A static version of that roadmap is shown below. 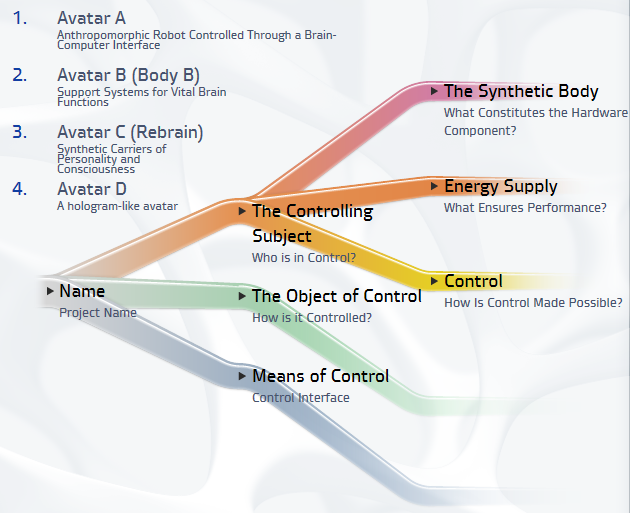 Although the Initiative wants to find ways of preserving human intelligence, artificial intelligence does play a role in the plan. If you have seven minutes to spare, you should watch the attached video to see how the Initiative promotes it ambitions.

Commenting on the Initiative, Dario Borghino writes, “When speculating on seemingly unobtainable goals such as this, one must be careful not to believe that improbable technological advances automatically become more likely simply by looking further away in the future.” [“‘Avatar’ project aims for human immortality by 2045,” Gizmag, 25 July 2012] Borghino continues:

“This is the cognitive trap that, for instance, has seen many leading IT experts predict the development of a human-level artificial intelligence at roughly twenty years in the future for at least the past five decades. Looking at Avatar’s proposed timeline, Itskov’s project seems to suffer from the same fallacy. Certainly, if we borrow Carl Sagan’s rule that ‘extraordinary claims demand extraordinary proof,’ the project comes up short for the time being; it does, however, have the merit of basing most of its steps on technology that is either in the works or of general interest. And with the rate of technological change continuing to accelerate, the project’s goals may be within reach, although not necessarily within the project’s aggressive timeline.”

I believe Borghino is justified in his skepticism. The 2045 Initiative is certainly ambitious. However, other people’s skepticism shouldn’t keep Itskov from pursuing his dreams.