U.S. Manufacturing at a Tipping Point

Last summer supply chain analyst Bob Ferrari asked the question, “Can an Economy Succeed Without Vibrant Manufacturing and Supply Chain Capabilities?” [Supply Chain Matters, 22 August 2011] His answer to that question was a resounding, “NO.” He wrote, “Manufacturing does matter, and as we have noted on many occasions, the existence of innovative and vibrant value and supply chains is the real engine for a vibrant economy that fuels healthy job growth.” The good news for the U.S. economy was that, in October of last year, the Boston Consulting Group published a report that concluded:

“Transportation goods, such as vehicles, auto parts, electrical equipment and household appliances, and furniture are among seven sectors that could create 2 to 3 million jobs as a result of manufacturing returning to the U.S. – an emerging trend expected to accelerate starting in the next five years. … The analysis identifies those broad industry clusters that are most likely to reach a ‘tipping point’ by around 2015 – a point at which China’s shrinking cost advantage should prompt companies to rethink where they produce certain goods meant for sale in North America. In many cases, companies will shift production back from China or choose to locate new investments in the United States. … In addition to transportation goods, electrical equipment/appliances, and furniture, the sectors most likely to return are plastic and rubber products, machinery, fabricated metal products, and computers/electronics. Together, these seven industry groups could add $100bn in output to the U.S. economy and lower the U.S. non-oil trade deficit by 20 percent to 35 percent, according to BCG.” [“Manufacturing “Renaissance” to Begin Returning to U.S. Around 2015, Research Firm Says,” SupplyChainBrain, 10 October 2011]

Concerning the BCG report, Bob Ferrari wrote, “These are important conclusions coming from a highly respected corporate business strategy firm, the same firm that advised manufacturers to source in low-cost countries many years ago. The report itself can be downloaded at the following link.” [“Will Manufacturing Return to the U.S?- The Boston Consulting Group Weighs In,” Supply Chain Matters, 7 October 2011] According to the SupplyChainBrain article, “The tipping-point sectors account for about $2tr in U.S. consumption per year and about 70 percent of U.S. imports from China, valued at nearly $200bn in 2009. The job gains would come directly through added factory work and indirectly through supporting services, such as construction, transportation, and retail.” In past posts, I’ve stressed the point that most of the jobs created by a renaissance in U.S. manufacturing would not be on the factory floor but in the supporting supply chain. That’s because new manufacturing plants are so highly automated.

About the same time that the BCG report was being published, Simon Jacobson, research director for manufacturing with Gartner, told the editorial staff at SupplyChainBrain, “The globalization of supply chains is causing companies to take a fresh approach to their manufacturing strategies. … They are working to align capabilities with vendors based on common technologies, products and market clusters.” Jacobson told the SCB staff that “manufacturers are rethinking their reliance on China and other parts of Asia as sources of low-cost production.” [“The Changing World of Global Manufacturing,” SupplyChainBrain, 12 October 2011] Among the reasons for all of this reassessment are rising overseas wages and increasing transportation costs.

Rich Thompson, executive vice president of the Global Supply Chain Practice for Jones Lang LaSalle, agrees with the analysts at the Boston Consulting Group and Jacobson. He told the SupplyChainBrain staff that even though “China and similar nations will always be in the mix for turning out certain items” there is a move to manufacture “more sophisticated items” in the United States. [“Manufacturing and the Global Supply Chain,” SupplyChainBrain, 18 October 2011] For a number of reasons, Thompson claims that the Southeast United States looks like a good location for new manufacturing plants.

The editorial staff at Supply Chain Digest doesn’t appear to be quite as sanguine as others when it comes to the future of manufacturing in the United States. Staff members seem to agree with Booz & Company consultants, Arvind Kaushal, Thomas Mayor, and Patricia Riedl, that “US manufacturing [is] at an ‘inflection point’ in its future, and that the right strategies and policies by business and government could see the percent of goods consumed in the US that are made in the US rise from its current 75% or so (a higher level than many people would probably guess) to as high as 95%, or fall steeply to just 40% in coming years – at which point ‘US manufacturing could then erode past the point of no return.'” [“Turning the US Manufacturing Inflection Point in the Right Direction,” Supply Chain Digest, 10 November 2011]

Where to manufacture products is not a decision to be taken lightly. David Simchi-Levi, James Paul Peruvankal, Narendra Mulani, Bill Read and John Ferreira write, “Smart companies are likely to conclude that the optimal manufacturing strategy depends on working out a subtle equation that includes the materials that go into the product, the product itself and the expected growth of the customer base.” [“Is It Time to Rethink Your Manufacturing Strategy?” MIT Sloan Management Review, 21 December 2011] They continue, “This equation must be monitored continually so that manufacturing and logistics solutions can be dynamic and flexible to meet the ongoing changes in the market.” Simchi-Levi and his colleagues don’t believe “the United States or Western Europe will ever again be the manufacturing hubs they once were.” And, although they do believe that some manufacturing will return from Asia, they believe “a regional strategy is likely to mean Mexico or Eastern Europe” are likely locations for new plants.

Laura D’Andrea Tyson, a professor at the Haas School of Business at the University of California, Berkeley, believes “that a strong manufacturing sector matters — and deserves the attention of policy makers.” [“Why Manufacturing Still Matters,” New York Times, 10 February 2012] She believes that business-friendly policies can induce manufacturers to set up shop in the United States. Among the policies that she believes would “support manufacturing” are “measures to increase high-school graduation rates; work-force training programs at community colleges; more support for basic research, infrastructure investment, and scientific, engineering and technical education; and immigration reform.” She believes these policies “would benefit not just manufacturing but the entire economy.”

Although it’s obvious that there is no consensus about whether significant manufacturing will return to the U.S., the chatter about a renaissance in manufacturing has not waned. Raj Batra, president of the industry automation division at Siemens, for example, told the staff at SupplyChainBrain, “Today we really see the U.S. arriving as a high-end, innovation-oriented manufacturing arena and we think the prospects for manufacturing in America are very bright.” [“Is There a Manufacturing Renaissance in the U.S.?” SupplyChainBrain, 20 April 2012] In an update to its October report, the Boston Consulting Group “released a new study showing there is significant interest among many large US manufacturers in moving production back to the US.” [“New Study from Boston Consulting Group Says 50% of Large US Manufacturers will or Are Considering Returning at Least Some Production Back to the US,” Supply Chain Digest, 25 April 2012] According to another article on the BCG study, “The top factors cited as driving future decisions on production locations: labor costs (57 percent), product quality (41 percent), ease of doing business (29 percent), and proximity to customers (28 percent). In addition, 92 percent said they believe that labor costs in China ‘will continue to escalate,’ and 70 percent agreed that ‘sourcing in China is more costly than it looks on paper.'” [“Many U.S. Manufacturers, Especially Larger Ones, Consider Returning Production to U.S.,” SupplyChainBrain, 30 April 2012] The article continues:

“Interest in shifting manufacturing to the U.S. is particularly strong among companies in several sectors identified in BCG’s March report as nearing a ‘tipping point.’ In these industry groups, China’s cost advantage is likely to shrink within the next few years to the point where companies should rethink where they produce certain goods, mainly those for sale in North America. These tipping-point sectors are transportation goods, appliances and electrical equipment, furniture, plastic and rubber products, machinery, fabricated metal products, and computers and electronics. BCG predicts that production of 10 to 30 percent of U.S. imports from China in these industries, which account for approximately 70 percent of goods that the U.S. imports from that nation, could shift to the U.S. before the end of the decade.”

An excellent graphic published in American Shipper depicts the lay of the land from the perspective of industry clusters. [“Right Shoring,” June 2012] 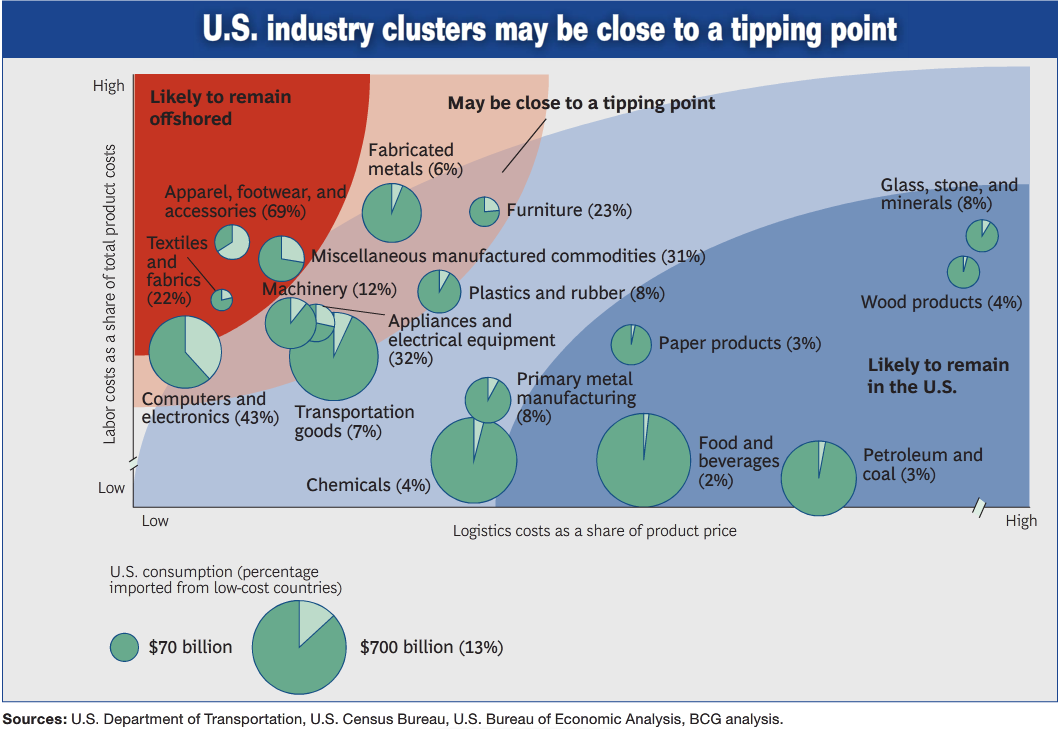 Although it appears that the majority of analysts believe that the future of U.S. manufacturing looks promising, “the re-shoring trend could be slowed or reversed, BCG says, if, for example, the value of the U.S. dollar rises sharply.” [“Big manufacturers more likely to embrace “Made in USA”: survey,” by Nick Zieminski, Reuters, 20 April 2012] Zieminski also notes that “some 600,000 U.S. manufacturing jobs are going unfilled because of a dearth of skilled applicants, according to the Manufacturing Institute and Deloitte. A renewed focus on educating students in science, technology, engineering and math could address the shortfall, manufacturing executives say.” In other words, if there is to be a renaissance in U.S. manufacturing, it will require collaboration between the public and private sectors. Unfortunately, with Washington severely divided along party lines, collaboration isn’t a word one often hears nowadays.