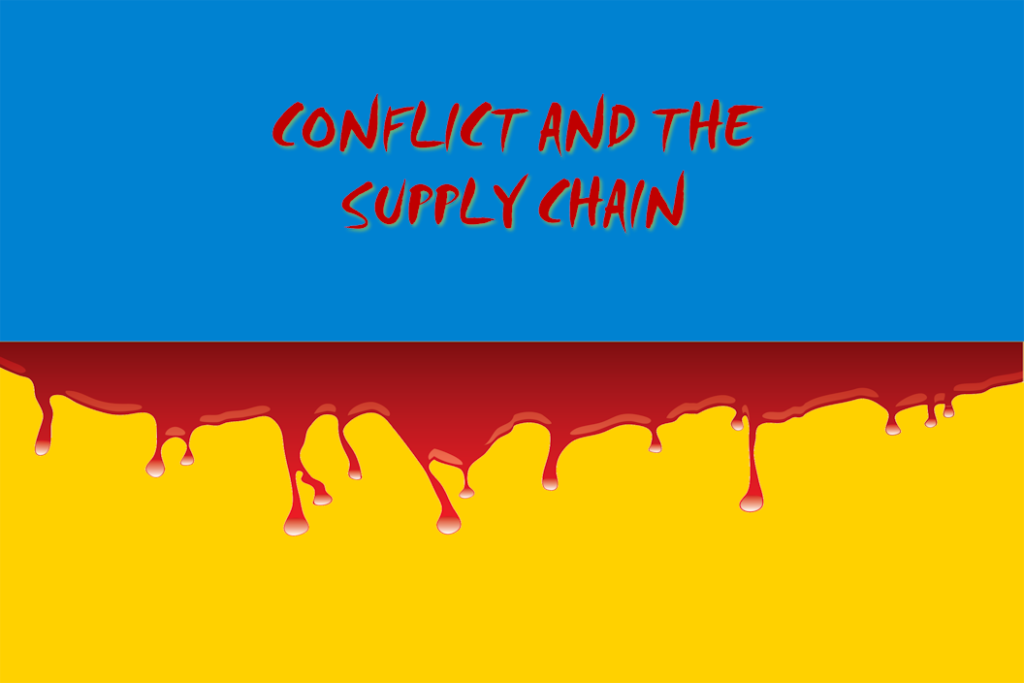 Half a decade ago, journalist Kevin O’Marah (@komarah) wrote, “Supply chain risk management has enjoyed a rise in prominence over the past decade as events like Japan’s tsunami, Thailand’s floods and the US west coast port strike have shone a light on the value of resilience. Hot risk factors today include data security, logistics disruptions and trade policy uncertainty. Oddly, however, concerns about war remain largely off the radar. Are we fooling ourselves? And if so, what should we do differently?”[1] He presciently added, “Does it make sense [to ignore the threat of war] at a time when nationalism is clearly and ominously rising everywhere on earth?”

O’Marah’s concerns about how conflict might affect supply chains were shuttled aside once the Covid-19 pandemic broke out. O’Marah warned, however, that ignoring geopolitical risks was unwise. He wrote, “For supply chain leaders, especially those running global organizations with center-led functional executives in charge of manufacturing, sourcing and logistics, the temptation is to ignore politics as an externality and concentrate instead on the known-knowns of costs, capacity and lead-times. … Other industries may have less direct exposure to global suppliers but everyone should widen their thinking about supply chain risk. After all, the war of 1914-18 was supposed to be the ‘war to end all wars’.”

Fast forward to 2022 and business correspondent Matt Egan (@MattEganCNN) reports that Russia/Ukraine conflict has replaced Covid-19 as the greatest risk to today’s global supply chains.[2] He quotes Tim Uy, an economist at Moody’s Analytics, who wrote, “The greatest risk facing global supply chains has shifted from the pandemic to the Russia-Ukraine military conflict and the geopolitical and economic uncertainties it has created.” Newspaper columnist Thomas Friedman (@tomfriedman) labels the conflict, “A raw, 18th-century-style land grab by a superpower — but in a 21st-century globalized world.”[3] There has been no hiding from consequences of the war. Gasoline and diesel prices skyrocketed shortly after the conflict began — literally throwing fuel on the inflationary fire.

How Does the Russia/Ukraine Conflict End?

As I write, Russian forces continue to destroy Ukrainian cities and infrastructure as well as slaughter Ukrainian citizens. It will take a generation or more to repair the damage once the conflict ends. There are no happy endings to the conflict. Nevertheless, many experts have speculated about how it might end. Below are some of the scenarios being discussed.

1. Total Russia Victory. For Ukrainians, this is the worst possible outcome. Russian dictator Vladimir Putin would exult in a victory and move to reincorporate seized territory into Russia proper. Newspaper columnist David Brooks (@nytdavidbrooks) believes Putin won’t stop the until he gains total victory. He explains, “That’s because Vladimir Putin is not a conventional great power politician. He’s fundamentally an identity entrepreneur. His singular achievement has been to help Russians to recover from a psychic trauma — the aftermath of the Soviet Union — and to give them a collective identity so they can feel that they matter, that their life has dignity. The war in Ukraine is not primarily about land; it’s primarily about status. Putin invaded so Russians could feel they are a great nation once again and so Putin himself could feel that he’s a world historical figure along the lines of Peter the Great. … There have been hints that Putin might be willing to cut a deal with some sort of compromise and retreat from Ukraine, but that would be a shock. It would destroy the bloated and fragile personal and national identity that he has been building all these years. People tend not to compromise when their very identity is at stake.”[4]

2. Ukraine Divided. On 7 March 7, the Russian press revealed a set of demands Putin established to end Russian military actions. Among those conditions were: Ukraine must cease military operations, agree to neutrality (i.e., never join NATO) and put that in its constitution, cede all claims to Crimea, and recognize the independence of the so-called Donetsk and Luhansk “people’s republics” in Donbas. Many experts believe these were Putin’s primary objectives all along as well as installing a pro-Russia regime over what is left of the former Ukraine. As he seizes more Ukrainian territory, it will be interesting to see if his demands evolve. Steven Pifer (@steven_pifer), a retired Foreign Service officer, asks, “Will Putin rethink his objectives? On his current course, a military ‘victory’ would appear to entail a years- or decades-long occupation of a hostile, anti-Russian Ukraine, political isolation from most of the world, and economic sanctions that will devastate the Russian economy. One would think there has to be a better option.”[5]

3. A Quagmire. Ukrainians have demonstrated a fierce pride and willingness to fight. Any Russian occupation of the country is likely to end in a quagmire of guerilla fighting. Barry Pavel, Peter Engelke, and Jeffrey Cimmino, from the Atlantic Council’s Scowcroft Center for Strategy and Security, note, “Neither Ukraine’s armed forces nor its population are ready to surrender.”[6] If the conflict continues, they expect Ukrainians to mount “a broad-based, well-armed, and well-coordinated insurgency against the invaders. Although Ukraine’s regular forces are diminished over time, and although major cities such as Kyiv are occupied, Russia’s victory [would be] a pyrrhic one.”

4. A Diplomatic Solution. Diplomatic correspondent James Landale (@BBCJLandale) suggests a diplomatic solution is not out of the question — neither is the elimination of Putin.[7] Neither solution, however, are likely at this point. Back in 2014 when Russia seized Crimea, Henry Kissinger, doyen of realist diplomacy, suggested four principles that could guide a diplomatic solution in Ukraine.[8] They were: 1) Ukraine should have the right to choose freely its economic and political associations, including with Europe. 2) Ukraine should not join NATO. 3) Ukraine should be free to create any government compatible with the expressed will of its people. Wise Ukrainian leaders would then opt for a policy of reconciliation between the various parts of their country. Internationally, they should pursue a posture comparable to that of Finland. That nation leaves no doubt about its fierce independence and cooperates with the West in most fields but carefully avoids institutional hostility toward Russia. And 4) put Crimea’s relationship to Ukraine on a less fraught basis. To that end, Russia would recognize Ukraine’s sovereignty over Crimea. Ukraine should reinforce Crimea’s autonomy in elections held in the presence of international observers. The process would include removing any ambiguities about the status of the Black Sea Fleet at Sevastopol. It’s probably too late to implement any of those suggestions. Presciently, Kissinger noted, “These are principles, not prescriptions. People familiar with the region will know that not all of them will be palatable to all parties. The test is not absolute satisfaction but balanced dissatisfaction. If some solution based on these or comparable elements is not achieved, the drift toward confrontation will accelerate. The time for that will come soon enough.” And come it did.

5. A Miracle Ukrainian Victory. Francis Fukuyama (@FukuyamaFrancis), a Senior Fellow at Stanford’s Freeman Spogli Institute, is one of the few scholars predicting a Ukrainian victory. He writes, “Russia is heading for an outright defeat in Ukraine. Russian planning was incompetent, based on a flawed assumption that Ukrainians were favorable to Russia and that their military would collapse immediately following an invasion.”[9] He adds, “The collapse of [Russia’s] position could be sudden and catastrophic, rather than happening slowly through a war of attrition. The army in the field will reach a point where it can neither be supplied nor withdrawn, and morale will vaporize. This is at least true in the north; the Russians are doing better in the south, but those positions would be hard to maintain if the north collapses. There is no diplomatic solution to the war possible prior to this happening. There is no conceivable compromise that would be acceptable to both Russia and Ukraine given the losses they have taken at this point. … A Russian defeat will make possible a ‘new birth of freedom,’ and get us out of our funk about the declining state of global democracy. The spirit of 1989 will live on, thanks to a bunch of brave Ukrainians.”

6. World War. Although the West has shown broad political and economic support for Ukraine, it has been cautious about what kind of military support it provides. The reason for this caution is simple: The West doesn’t want to engage Russia forces directly and start a European conflict that would quickly become a world war. Pavel and his colleagues explain, “The most dangerous scenario for the future of Europe and the global order is one in which the Ukraine conflict sets the stage for a direct military conflict between NATO and Russia.” They lay out several paths that could lead to such an outcome. Landale believes the most likely path to war between NATO and Russia isn’t in Ukraine but in the Baltic Region. He explains, “Putin could declare Western arms supplies to Ukrainian forces are an act of aggression that warrant retaliation. He could threaten to send troops into the Baltic states — which are members of NATO — such as Lithuania, to establish a land corridor with the Russian coastal exclave of Kaliningrad. This would be hugely dangerous and risk war with NATO. Under Article 5 of the military alliance’s charter, an attack on one member is an attack on all. But Mr. Putin might take the risk if he felt it was the only way of saving his leadership.”

Pavel and his colleagues observe, “The world remains in a dangerous and highly uncertain moment. What happens after this conflict is as much a question mark as how, when, and where the fighting ends.” I started out this article discussing the impact of war on supply chains, using the Russia/Ukraine conflict as an example. People are just beginning to understand how far-reaching the consequences of this conflict are going to be. Steve Schifferes (@saschiff), a former Professor of Financial Journalism at City, University of London, writes, “The invasion of Ukraine comes at a delicate time for the world economy, which was just beginning to recover from the ravages of COVID. Russia’s war could now have far-reaching economic consequences, as financial markets tumble and the price of oil soars. … Perhaps the biggest risk to the world economy is that a prolonged crisis could tip the world into stagflation, a combination of high inflation and low economic growth.”[10]

Schifferes concludes, “Europe is likely to be first in the path of any economic storm, partly because of its greater dependence on Russian energy supplies, but also because of its geographical proximity to a war on its doorstep. In the US, any economic difficulties could further weaken the Biden administration and bolster isolationist, America-first views. Meanwhile, a global alliance between Russia and China could further strengthen both economies, overriding any effect of sanctions, and strengthening their military as well as economic clout.” Let’s hope U.S. support for Ukraine remains strong and that path to peace can be found. Whatever the outcome of the conflict, it will be the global supply chain that gets the world’s economy back on track.