Home » Business » Trends and Technologies that are Going to Change Your Life and Business: Part 4

Trends and Technologies that are Going to Change Your Life and Business: Part 4

In Part 3 of this 4-part series, I discussed the first six of twelve technologies identified as game-changers by McKinsey & Company analysts, James Manyika, Michael Chui, Jacques Bughin, Richard Dobbs, Peter Bisson, and Alex Marrs in a report entitled, “Disruptive technologies: Advances that will transform life, business, and the global economy. [1 May 2013] The McKinsey analysts used four criteria to select their 12 candidates. First, the technology had to be “rapidly advancing or experiencing breakthroughs.” Second, the technology’s “potential scope of impact” had to be broad. Third, the technology had to be to affect “significant economic value.” Finally, that economic impact had to be “potentially disruptive.” In this post, I’ll discuss the remaining six technologies. The details concerning these technologies were drawn from the executive summary of their report.

The author’s write, “It is now possible to create cars, trucks, aircraft, and boats that are completely or partly autonomous. From drone aircraft on the battlefield to Google’s self-driving car, the technologies of machine vision, artificial intelligence, sensors, and actuators that make these machines possible is rapidly improving.” To put an exclamation point on this prediction, a Romanian teenager recently “came up with a low-cost autonomous car system. The idea brought Ionut Budisteanu the top prize, a $75,000 scholarship, in the Intel international Science and Engineering Fair.” [“Teen Invents Low-Cost Self-Driving Car Concept,” TechBeat, 21 May 2013] Below is a video about Budisteanu’s invention.

The authors write, “Energy storage technology includes batteries and other systems that store energy for later use. … Over the next decade, advances in energy storage technology could make electric vehicles (hybrids, plug-in hybrids, and all-electrics) cost competitive with vehicles based on internal-combustion engines. On the power grid, advanced battery storage systems can help with the integration of solar and wind power, improve quality by controlling frequency variations, handle peak loads, and reduce costs by enabling utilities to postpone infrastructure expansion.” This is an extremely important area that will become even more critical as populations expand and become ever more organized. Economic progress rides on the shoulders of the power grid. Dario Borghino reports, “A new ‘wood battery’ could allow the emerging sodium-ion battery technology to fit the bill as a long-lasting, efficient and environmentally friendly battery for large-scale energy storage.” [“Wood nanobattery could be green option for large-scale energy storage,” Gizmag, 6 July 2013] He explains:

“Scientists are speculating that sodium-ion batteries, currently in an early stage of development, could suit large-scale energy storage much better than Li-ion batteries, partially because sodium is cheap and plentiful and because sodium is environmentally benign. But for Na-ion batteries to become a viable energy-storage option there are still many obstacles to overcome, the greatest of which is the phenomenon known as sodiation. With each charge/discharge cycle, the sodium ions cause the anode of the battery to swell by as much as 420 percent and then return to normal. This phenomenon, known as sodiation, can literally pulverize the anode after only 20 cycles, rendering the battery extremely short-lived. University of Maryland (UM) researchers Liangbing Hu and Teng Li found a way around this problem. The stiff bases often used in existing batteries are too brittle to withstand the swelling and shrinking caused by sodiation, so the researchers turned to the much softer wood fibers. These have evolved to withstand these forces extremely well as they use capillary forces to transfer the sodium ions from the soil around them to the leaves of their tree. The resulting sodium-ion battery that uses wood fibers increases durability twenty-fold compared with previous designs. … Because sodium doesn’t store energy quite as efficiently as lithium, there is little chance of this technology eventually finding its way to your next-generation gadget. However, because of their low cost and use of environmentally benign common materials, sodium-ion batteries could be used to store large amounts of energy from renewable energy sources, such as wind and solar.”

Almost every list of trends and technologies that are going to change the world has additive printing somewhere on it. The authors write, “The performance of additive manufacturing machinery is improving, the range of materials is expanding, and prices (for both printers and materials) are declining rapidly — bringing 3D printing to a point where it could see rapid adoption by consumers and even for more manufacturing uses.” Schmidt believes it will be the combination of new materials and new manufacturing methods that will bring about a new industrial revolution. This combination means, he states, “that it’ll be possible to build very interesting things from very interesting, new materials, which have all sorts of new properties.” Advanced materials is the next technology on the McKinsey list.

The author’s write, “Over the past few decades, scientists have discovered ways to produce materials with incredible attributes — smart materials that are self-healing or self-cleaning; memory metals that can never revert to their original shapes; piezoelectric ceramics and crystals that turn pressure into energy; and nanomaterials. Nanomaterials in particular stand out in terms of their high rate of improvement, broad potential applicability, and long-term potential to drive economic impact.” In fact, the nanomaterial graphene has been called “the first wonder material of the 21st century.” [“Graphene: Faster, stronger, bendier,” by Clive Cookson, Financial Times, 27 January 2013] Cookson writes, “Its properties encompass an astonishing range of superlatives, including better electrical and thermal conductivity, mechanical strength and optical purity than any other material.” It seems that new properties of uses for graphene are discovered every day.

The author’s write, “The ability to extract so-called unconventional oil and gas reserves from shale rock formations is a technology revolution that has been gathering force for nearly four decades. The combination of horizontal drilling and hydraulic fracturing makes it possible to reach oil and gas deposits that were known to exist in the United States and other places but that were not economically accessible by conventional drilling.” Robert Nelsen, co-founder and Managing Director of ARCH Venture Partners, agrees with the McKinsey analysts. He states, “The biggest trend is innovation in our core energy sector, more specifically fracking, and new technologies that can turn natural gas into oil. The first is a product of oil industry and academic research; the second is a product of biotech innovation. This is probably the largest change in our economy in 50 years, and will rival the existence of Silicon Valley in its importance. It will make the USA a net exporter of fuels in 20 years, will take the ability to price oil away from OPEC and thus reduce tension in the Middle East, and will reduce strategic energy competition between the USA and China and Russia by letting them all increase their own domestic production.” [“Top 20 Under-the-Radar Trends in Innovation,” by Gregory T. Huang, Xconomy, 30 May 2013] Environmentalists don’t hail these new capabilities as breakthroughs; rather, they see them as expensive attempts to cling to the age of oil. They believe that the money being spent oil and gas exploration would be better spent on the final technology identified by McKinsey: renewable energy.

The authors write, “Renewable energy sources such as solar, wind, hydro-electric, and ocean wave hold the promise of an endless source of power without stripping resources, contributing to climate change, or worrying about competition for fossil fuels.” What has held back renewable energy from achieving greater market share in energy production is cost. The McKinsey analysts note, however: “In the past two decades, the cost of power produced by solar cells has dropped from nearly $8 per watt of capacity to one tenth of that amount.” Despite advances, however, renewable energy generation in the U.S. still lags behind other fuel sources (see the following image). 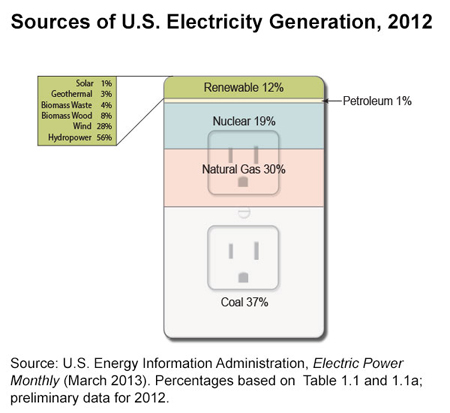 The McKinsey analysts note that there are other technologies “on the radar” awaiting breakthroughs that give them the same kind of economic impact as the twelve candidate technologies they selected. The point is, there are amazing advances being made every day and we never know how they will change our lives.