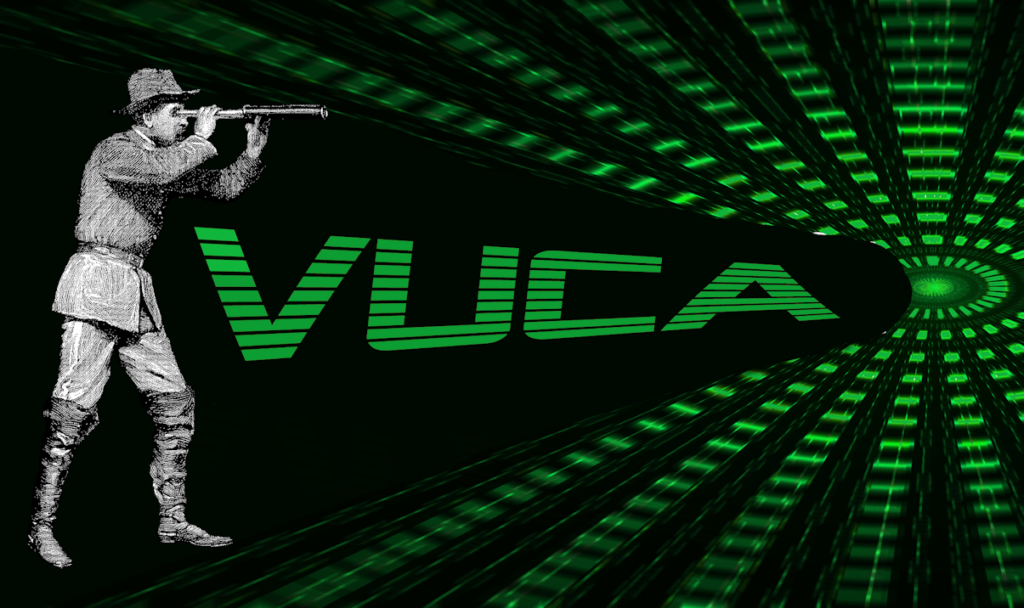 An oft-heard business phrase is “innovate or die.” Innovation is important; however, the hundreds of articles annually written about innovation make it clear that innovation is also difficult. One of the reasons innovation remains challenging is that the world is changing so fast that predicting the future is almost impossible. In fact, today’s businesses must operate in what has been described as a VUCA environment. VUCA stands for Volatility, Uncertainty, Complexity, and Ambiguity. According to organizational consultant Waltraud Gläser (@WaltraudGlaeser), this term was coined in 1985 “by economists and university professors Warren Bennis and Burt Nanus in their book Leaders. The Strategies For Taking Charge.”[1] She goes on to note that the U.S. military eventually adopted the term in its planning efforts. Each of the terms in the acronym (i.e., volatility, uncertainty, complexity and ambiguity) depicts a specific characteristic of particular environment. Gläser discusses each of those terms:

• Volatility. “Volatility describes the intensity of fluctuation over time.”

• Uncertainty. “Uncertainty describes the unpredictability of events. The more ‘surprises’ the context provides, the more uncertain it is.”

• Complexity. “Complexity is influenced by the number of influencing factors and their interdependence or interaction. The more interdependencies a system contains, the more complex it is.”

• Ambiguity. “Ambiguity describes the [inexactness] of a situation or information. Even if a lot of information is available (in the sense of being secure and predictable), the evaluation of the same can still be ambiguous.”

Rather than moaning about how VUCA conditions make innovation more difficult, INSEAD professor Nathan Furr and entrepreneur Susannah Harmon Furr argue that uncertainty and possibility are “two sides of the same coin.”[2] Journalist Curt Nickisch (@CurtNickisch), in an introduction to an interview he conducted with the Furrs, writes, “For many of us, uncertainty is nerve-wracking. However, many of our best achievements and meaningful experiences come from a trying time of ambiguity. … By learning to welcome and cope with the gray area, an individual can reach better outcomes.”[3] He explains that the Furrs reviewed research and interviewed innovators and changemakers to discover best practices related to stepping proactively into the unknown.

Some people may argue that it takes courage to step boldly into the unknown. I believe its takes curiosity. “We keep moving forward, opening new doors, and doing new things,” Walt Disney once said, “because we’re curious and curiosity keeps leading us down new paths.” Albert Einstein believed curiosity was one of humanity’s best traits. He once wrote, “The important thing is to not stop questioning. Curiosity has its own reason for existence. One cannot help but be in awe when he contemplates the mysteries of eternity, of life, of the marvelous structure of reality. It is enough if one tries merely to comprehend a little of this mystery each day.” And Dr. Abraham Flexner, first director of the now famous Institute for Advanced Studies in Princeton, New Jersey, wrote, “Curiosity, which may or may not eventuate in something useful, is probably the outstanding characteristic of modern thinking. It is not new. It goes back to Galileo, Bacon, and to Sir Isaac Newton, and it must be absolutely unhampered.”

Journalist Astrid Sandoval (@mars123), who also interviewed the Furrs, notes, “Embracing an unpredictable world can be hard, yet stepping into uncertainty is often the only way to innovate.”[5] Curiosity can help make embracing uncertainty a bit easier because it opens up one’s sense of wonder rather than feeding one’s sense of fear. Nathan Furr told Sandoval, “We talk all the time about innovation — how to come up with ideas, how to test ideas, how to win support for our ideas — but we never really acknowledge that doing anything new, whether it’s a change, a transformation, or an innovation, requires that we step into the unknown.”

Journalists Kelly Schmutte and Andrea Small observe, “Evolutionarily, the brain dislikes uncertainty, regarding it as a type of pain. The brain therefore tries to avoid uncertainty, and in its place creates story upon story to explain it away. The brain is so powerful it causes people to vividly imagine a way to closure.”[5] As you might imagine, this human trait makes embracing uncertainty more difficult. However, Schmutte and Small quote Dr. Robert Burton, former chief of neurology at the University of California at San Francisco-Mt. Zion Hospital, who says, “Only in the absence of certainty can we have open-mindedness, mental flexibility, and willingness to contemplate alternative ideas.” That belief is certainly embraced by the Furrs.

Nathan Furr told Sandoval, “In a world of uncertainty, if you believe that everything is up to you and totally within your control, you are going to spend your whole life stressing out.” The Furrs believe that if you embrace uncertainty rather than struggle to make sense of it, good things will happen. Susannah Furr told Sandoval, “Uncertainty is the portal to possibility.” Business consultant and innovation guru Tendayi Viki (@tendayiviki) suggests that embracing uncertainty requires an explorer mindset. He explains, “This ability to live in the two worlds of explore and exploit will be the true test of corporate leadership. … You have to take the mindset of someone who is leading a team of explorers who are about to step into the great unknown. This is a useful metaphor to use. If you have a team that is about to travel to an unknown place, it is not really wise for you to ask them for a detailed plan, roadmap and expected returns. This makes no sense. As a leader in that situation, you have to realize that you are asking people to go out into the world and find out if there is something worth investing in there.”[6]

Adopting an explorer’s mindset doesn’t mean heading into the dark to wander aimlessly. Businesses know the areas in which they excel and, Viki, notes that is where businesses should choose to explore. He also advises that endless exploration is not a winning strategy. He explains, “In the explorer’s world, we make decisions based on evidence. It makes no sense for leaders to pour endless resources into an expedition to a place they have never seen just because they like the team or because the team are working on their pet project. All investment decisions must be based on the evidence that teams bring back. This is the only way to succeed as an innovation leader.”

Remaining curious and embracing uncertainty is not easy. Schmutte and Small note, “When the brain [faces uncertainty], we feel uneasy, lost, or anxious. Most people have a hard time admitting that they don’t know. There’s so much pressure put on us to have all the answers. Worse still is when we don’t even know if we’re answering the right question. Compound this with the surrounding pressures of life and work, throw in some constraints like time and money, and ambiguity mutates into anxiety.” They add, “Navigating ambiguity takes work. It can be exhausting. Even when you think you’re relaxing and letting it be, your brain is working in the background to solve unknowns and make connections. It’s a muscle that can be built with patience and effort — not a hand-wavy, woo-woo, abstract thing that you do or don’t have.” Nathan Furr told Sandoval that he started his research wondering how innovators managed uncertainty. Innovators he interviewed told him they didn’t “manage” uncertainty, they embraced it. Furr then started asking a very different question, “What if the question isn’t how we manage and control uncertainty but how we activate and unlock the potential that’s there?” What if indeed?