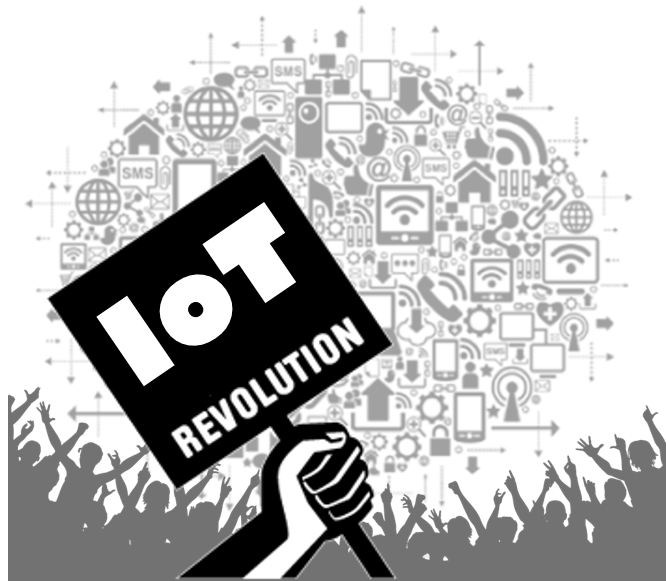 The Internet of Things Revolution

“A funny thing happened on the way to the internet of things,” writes Richard Waters (@RichardWaters). “Many of the ‘things’ got a mind of their own. They also started to be produced in surprising new ways, often at much lower cost, and mutate into forms few anticipated.”[1] Although Waters makes it sound like the Internet of Things (IoT) is a fully realized concept, Maxwell Wessel (@maxwellelliot), Vice President of Innovation at SAP, James Allworth (@jamesallworth), Director of Strategy for Medallia, Inc., and Aaron Levie (@levie), co-founder and CEO of Box, remind us that it is not.[2] “Despite the inevitability of this ‘smart’ future,” they write, “today only a small portion of businesses regularly merge data and physical products.” Yet even at this early stage of development, many pundits are already envisioning a brave, new world ushered in by the IoT. Because the IoT is primarily a machine to machine (M2M) network, General Electric prefers the term “Industrial Internet.” Cisco, on the other hand, sees the lines blurring so thoroughly between the IoT and the World Wide Web that it prefers the term “Internet of Everything” (IoE). Whatever you want to call it, the IoT is fomenting a revolution that will change the business landscape forever.

The underlying drivers of this Internet of Things revolution are cloud technology and artificial intelligence (AI). Cloud technology didn’t exist two decades ago and, even though researchers have been working on developing artificial intelligence for decades, it has only recently come into its own. The most important development in artificial intelligence has been the emergence of cognitive computing that allows humans to interact with computers in a more natural way. McKinsey & Company analysts describe the IoT as “digitizing the physical world.”[3] Kevin Kelly (@kevin2kelly), founding Executive Editor of Wired magazine, took that notion a step further when he tweeted, “In the very near future you will cognify everything in your life that is already electrified.” The “cognification” of the physical world is what will ultimately secure the IoT revolution. With all the articles being written about the IoT, one can’t help but wonder if most of chatter isn’t just hype. The McKinsey analysts believe there may be some hype involved; but, they assert that if you look beyond the hype you will find that IoT technology can create real economic value. Creating that value, they note, will not be easy. They explain:

“Capturing the maximum benefits will require an understanding of where real value can be created and successfully addressing a set of systems issues, including interoperability … To realize the full potential from IoT applications, technology will need to continue to evolve, providing lower costs and more robust data analytics. In almost all settings, IoT systems raise questions about data security and privacy. And in most organizations, taking advantage of the IoT opportunity will require leaders to truly embrace data-driven decision making.”

After reading the McKinsey report, Dominic Basulto (@dominicbasulto) concluded that the IoT is actually being underhyped.[4] He offers six reasons for reaching that conclusion. They are:

Daniel Alarcon asserts, “The original hype about the Internet of Things started with the idea of the connected home, namely the connected kitchen. With internet connectivity, appliances would be able to respond instantly to safety concerns, deliver recipes, cook meals and more with less help from humans.”[5] There certainly remains a lot interest in making our homes smarter. We can now buy smart thermostats, smart door locks, smart lights, and smart garage door openers along with an array of smart kitchen appliances. Like most analysts, however, Alarcon believes that is not the smart home movement that makes the IoT so revolutionary. “Today,” he writes, “the idea of the automated home pales in comparison to the opportunities that the Internet of Things offers for various industries. IoT may soon offer new ways to achieve efficiency for businesses and workflow optimization for industrial processes. This also demonstrates that the real power in the Internet of Things comes not from the devices themselves but the potential that connectivity offers. The Internet of Things offers the ability to connect the real world with the digital world in a seamless manner.”

Some analysts believe that the emergence of the IoT marks the beginning of a new industrial revolution (sometimes referred to as Industry 4.0). For example, analysts from Strategy& and PwC write, “The fourth industrial revolution — characterized by the increasing digitization and interconnection of products, value chains and business models — has arrived in the industrial sector.”[6] Like Wessel, Allworth, and Levie, the Strategy&/PwC analysts understand that we are at the beginning of the Industry 4.0 era and that the vast majority of companies have yet to transform into the kind of digital enterprises that they will need to be to successfully traverse the new business landscape. They write:

“The implementation of the industrial internet represents a multi-year transformation process for the majority of companies, resulting in significant changes to their value chains. Due to the extent of the expected company-wide changes and the investments required in the next three to five years, it is first necessary for top management to recognize the importance of the topic, place it on the agenda and drive it to a high priority level within companies.”

“The digitization of machines, vehicles, and other elements of the physical world is a powerful idea. Even at this early stage, the IoT is starting to have a real impact by changing how goods are made and distributed, how products are serviced and refined, and how doctors and patients manage health and wellness. But capturing the full potential of IoT applications will require innovation in technologies and business models, as well as investment in new capabilities and talent. With policy actions to encourage interoperability, ensure security, and protect privacy and property rights, the Internet of Things can begin to reach its full potential — especially if leaders truly embrace data-driven decision making.”

I believe that data-driven decision making will involve two different elements. First, decision makers will take advantage of cognitive computing systems, like the Enterra Enterprise Cognitive System™, that can apply both mathematics and semantic reasoning (to provide context) to assist them in the decision-making process. Second, cognitive computing systems will autonomously make routine decisions that will free humans to concentrate on more pressing matters. Only when anomalies are detected will human decision makers be alerted so they can intervene. How the IoT revolution unfolds depends largely on how proactively all stakeholders get involved. As Alarcon writes, “Whether the benefits of the Internet of Things and automation will help society as a whole will depend on how these technologies are implemented and the policies that are put into place to govern the usage of the devices and the data.”