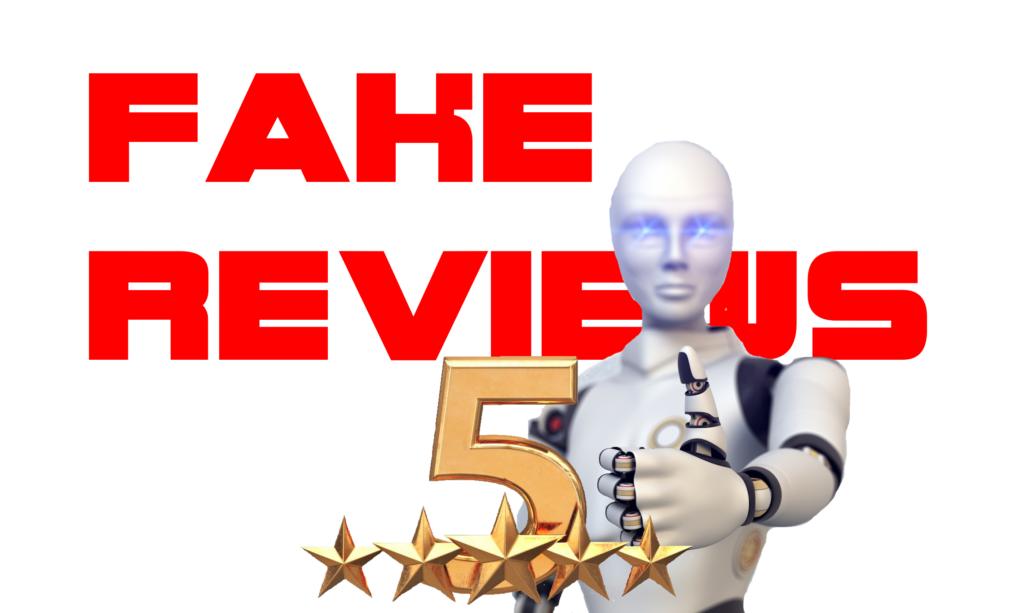 Since the advent of e-commerce, many consumers have turned to online reviews to judge value of products in which they are interested. When the system works as intended, consumers can learn from others how products perform in real life. They get answers to questions like: Is the product of good quality? Does it work as advertised? Is a restaurant’s food and service top notch? Studies have shown that most consumers trust others’ opinions more than they do manufacturers’ advertising. So it came as no surprise when fake reviews popped up in an effort to affect consumer behavior. Recently, a group of academics noted, “Although fake online customer reviews have become prevalent on platforms such as Amazon, Google, and Facebook, little is known about how these reviews influence consumer behavior.”[1] Discussing the group’s paper, journalist Emily Peck (@EmilyRPeck) observes, “Intuitively we know fake reviews are bad, but the paper offers a deeper picture of how phony write-ups and inflated star ratings change shopping behavior.”[2]

The Adverse Effects of Fake Reviews

Fake reviews are a real problem, especially during the holiday shopping season. Peck reports, “The pandemic led to a surge in both online shopping and fake reviews — during the 2020 holiday shopping season, about 42% of the reviews on Amazon were fakes, according to one estimate.” In July, Amazon started “legal action against the administrators of more than 10,000 Facebook groups. … It says the groups are generating fake reviews on Amazon marketplaces in the US, UK, Germany, France, Italy, Spain, and Japan. The tech giant says the groups offer money or free goods in exchange for reviews being posted on Amazon. One of the groups, removed earlier this year by Facebook’s parent company Meta, had 43,000 members.”[3]

Some pundits believe the 42% figure is way too high. For example, Jonathan Marciano (@J_Marciano), Director of Communications at DataRails, reports a much lower number. He writes, “Using official figures and self-reporting by the world’s leading e-commerce sites (including Trip Advisor, Yelp, TrustPilot and Amazon) on average we find that 4% of all online reviews are fake.”[3] So not a problem, right? Wrong. Marciano notes that global e-commerce expenditures in 2021 totaled $3.8 trillion. “Translating this into economic impact,” he writes, “the direct influence of fake online reviews on global online spending is $152 billion.” The academics cited above reached four conclusions from their study:

• Economic welfare losses from such reviews may be important — on the order of $.12 for each dollar spent (i.e., consumers pay higher prices for products touted by fake reviews).

• Fake reviews have heterogeneous effects (e.g., “the effect of fake reviews is smaller for those who do not trust customer reviews [and] fake reviews also have larger effects on those who shop online more frequently”).

Marciano indicates that many businesses promote fake positive reviews because the payoff is big. He explains, “The return on investment of soliciting fake reviews make them highly profitable. An extra star on a restaurant’s Yelp rating can increase revenue by 5% to 9%. The Federal Trade Commission has shown that the outlay on fake reviews can provide a payoff times twenty.” A more recent problem for businesses is the rise of fake negative reviews from groups demanding a ransom to delete the bad reviews. Freelance writer Migs Bassig (@migsbassig) notes that fake online reviews can come from a multitude of sources, including: service providers or vendors that sell both positive and negative reviews; business owners and marketers; competitors; former employees; current employees; friends and family, and customers who write negative reviews in order to get a refund, a discount, or some other benefit.”[5]

According to Kay Dean (@Fakereviewwatch), a former federal criminal investigator and founder of the YouTube Channel Fake Review Watch, there are no rules in today’s online environment. She observes, “There are no repercussions. There are no penalties. Cheating is rewarded in the current environment.”[6] That means that both businesses and consumers are pretty much on their own to protect themselves against fake reviews.

What Businesses Can Do

Marciano suggests five things businesses can do to counter fake reviews. They are:

1. Identify and filter invalid reviews. “The key is to get ahead and stop the reviews from happening in the first place. Knowing where the risks come from and acting fast are key. The most basic fake review bot attack could be created and executed within a few hours. Businesses can retaliate by ensuring that fake users on review sites aren’t making their way to a company’s site and by deploying customer acquisition security technology to ensure marketing efforts are going towards potential customers rather than malicious bots.”

2. Education. The academics cited at the beginning of this article noted that educating consumers could reduce the economic impact of fake reviews by 44%. Marciano also believes education could help businesses. He explains, “By gaining a better understanding of how fake online reviews affect different industries and markets, the risk they pose to a specific business can be more accurately gauged and will reveal how that has a domino effect on other businesses and revenues. Education can be the first step toward better protecting an online reputation.”

3. Get ahead of enforcement costs. Marciano notes that litigation is expensive and “is a major indirect cost that could be added to the $152 billion direct loss.” He suggests the best way to avoid these added costs is to act preemptively. He explains, “When businesses protect their reputations by blocking online reviews through a few simple development steps, these costs can be minimized. The problem will only multiply if left to fester, as new technology brings new bots into the area. But if companies actively filter out these kinds of reviews they can ensure enforcement costs are as low as possible.”

4. Prioritize action against fake reviews. As I noted above, gangs are now posting fake reviews as ransomware. Protecting against such attacks is difficult. Marciano notes, “By protecting online reputations and by blocking and filtering online reviews businesses protect their revenues. It’s understandable that unsatisfied customers might leave some constructive criticism here and there, but if bots are taking over your review platforms, then minimizing fake reviews should be a priority.”

5. Maintain trust. Marciano notes, “85% of consumers believe the reviews they read are ‘sometimes or often fake’.” As a result, he adds, “Eliminating fake reviews when possible doesn’t just help with revenue and authenticity, but it also helps maintain trust among your existing and future customers. When consumers realize that a brand cares about promoting and championing the truth, they tend to want to continue to buy the service.”

What Consumers Can Do

In an email I received from Axios reporters Matt Phillips and Emily Peck, they provided a few tips consumers can use to spot fake reviews online. Peck notes, “[It] turns out that spotting a fake review online while you’re shopping or trying to find services, like a doctor or a dog-sitter, is harder than you’d think. Borderline impossible.” That’s worth keeping in mind. Nevertheless, here are some of things they say you can do:

1. Consider the source: “Be very skeptical of reviews on a brand’s website, where they’ve likely curated the responses, said Jenny Gyllander, the founder of a startup that hosts independent product reviews. So if you’re at BrandX.com and most people love Brand X, yeah, that doesn’t mean a whole lot.”

2. Check the dates: “If there’s a cluster of positive reviews posted in a relatively short amount of time, that’s a sign something shady is going on.”

4. 1 star, not ideal either: Davide Proserpio, a marketing professor at the University of Southern California Marshall School of Business, told Phillips and Peck, “Most fake reviews are at extremes. Brands will pay for five-star ratings for themselves, or one-star ratings to trash their competitors.”

5. Check the profile: “It’s not a good sign if a reviewer has only written one review, given only positive reviews, uses a stock image as a profile pic, or — and this is a big no — has a geographically diverse pattern of reviews. Most people review services in the area where they live.”

6. Go old school: Kay Dean told Phillips and Peck, “I recommend sticking to the tried and true method of getting your business recommendations from REAL friends and relatives, not virtual people.”