The Future of Big Data, Part 2

In Part 1 of this series, I discussed the views of several pundits who believe that big data has been overhyped, is descending into disillusionment, and should be done away with as a business term. In the end, however, they all agreed that big data analytics was here to stay and would be a differentiator for successful companies in the future. Marketing technologist Scott Brinker writes, “Let’s face it: marketing is in a big data bubble.” [“The big data bubble in marketing — but a bigger future,” Chief Marketing Technologist, 21 January 2013] He continues:

“That’s both a ‘big data’ bubble and, more generally, a big ‘data’ bubble. Everyone is talking about data, big data, data analytics, big data analytics. Vendors, analysts, consultants, pundits, bloggers, etc., are all falling all over themselves to squeeze these terms into their propaganda content marketing. As just one example, three out of the Top 10 predictions for CMOs by IDC revolve around data. How CMOs must have a strategy for how market-driven data will contribute to corporate objectives (#1). How CMOs will be in jeopardy if they fail to produce a robust data analytics function (#4). How 50% of all new marketing hires will now have a technical background as the CMO scrambles for data analytics proficiency in the department (#5).”

Brinker agrees with Gartner analyst Svetlana Sicular who believes that the hype about big data is reaching the peak of the Hype Cycle. It’s about time, he asserts, that people start paying attention “to the operational implications of actually using data.” On that point, he agrees with all of the pundits cited in yesterday’s post. One open question, however, is who should be in charge of big data and overseeing its analysis.

Analysts associated with IT believe that the Chief Information Officer (CIO) should have control over big data. According to Brinker, ICD believes “that the CMO [Chief Marketing Officer] will be given full responsibility for ‘data analytics’ — and, in some unspecified way, required to tie that to business growth.” I’m sure there are arguments to be made for Chief Finance Officers (CFOs), Chief Operations Officers (COOs), and Chief Supply Officers (CSOs) as well. One thing that most pundits do agree on is that people proficient in dealing with big data are going to be in great demand in the years ahead. Brinker also insists that people with “data analytics proficiency” will be required to deal with big data, regardless of the department in which the responsibility for it finally resides. “That’s an awful lot of data, analytics, and insight,” Brinker writes, “but not much committed action beyond observation and fodder for internal meetings with PowerPoint. … This feels eerily analogous to the dot-com bubble of the late 90’s to me (substitute ‘analyze data’ with ‘capture eyeballs’).” He notes that during the dot-com bubble irrational exuberance resulted in exaggerated claims that were never realized. He fears the same thing will happen with big data. “The expectations of what big data will deliver on its own,” he writes, “especially in the short-term, are massively overblown. Lots of people are throwing lots of money at the promise that big data will, somehow — I don’t know how exactly, it’s technical and mathy — tame the fractured, fragmented, frenzied landscape that is modern marketing and crunch all of those complications into more customers. All as a well-oiled machine. Regrettably, it’s not that simple.”

Brinker is certainly correct on that point. The dot-com era was characterized by a lot of start-up companies that had an idea but no business plan. I agree with Brinker that big data is only going to prove useful when a specific plan for its use is in place and that plan results in a measurable return on investment. Brinker points out, “Data is not the same as information, which is not the same as insight.” The big data service provider firms that will do well in the future will be those that can turn data into actionable intelligence and provide decision makers with useful insights. Brinker also believes that its a fallacy to believe that “big data will replace strategic thinking.” In an earlier post, I discussed the fact that big data analytics will help decision makers think better rather than replace thinking altogether. In fact, there have been predictions that people will begin to think more not less in the years ahead as a result of the insights that big data will provide. Brinker goes into a lengthy discussion about the limitations of data and cites media researcher Yaakov Kimelfeld, who wrote, “Big data is not all of the data.” His point is that people will still be required to know what kind of information they need to collect and why. Even systems equipped with good artificial intelligent agents won’t have access to all the data in the world. At the end of his discussion, Brinker writes, “You get the point. Big data is not a panacea.”

Although it may sound like Brinker has soured on the whole idea of big data, he has not. He points out that the hype behind the dot.com era was based on the fact that something fundamentally revolutionary was taking place. We all know that the world changed as a result of the dot.com era. Brinker believes the same is true for big data era — “a truly major revolution is happening.” He explains:

“The real data revolution in marketing won’t be a sugar-coated miracle pill that anyone can adopt simply by buying some software, hiring a data scientist, and pointing them at a cloud full of data. The real revolution in data will be a change in organizational behavior and culture — and those changes are hard and take time. Many organizations will struggle with the shift, and frankly, many will be usurped by new competitors who grow up natively with this new worldview. So what exactly is the real revolution? It’s not data. It’s not even data analytics. It’s being data-driven. I know, that sounds pointlessly subtle, but bear with me. As Mark Twain would say, this is the difference between the lightening and the lightening bug. Being data-driven is not the same as just embracing data and analytics. Data and analytics are small pieces of a bigger picture. The bigger picture: creating an organization that can confidently experiment, innovate, and adapt on a broad scale. Being truly data-driven embeds this deeply into an organization’s culture.”

I’ve written a number of posts about corporate culture as it relates to innovation. In those posts, I’ve made the same point as Brinker; namely, changing corporate culture is difficult and takes time. He goes on to discuss how “some of the most valuable output from such data analytics will be mere hypotheses — interesting correlations of factors and behaviors in ever-more-finely-sliced customer segments that may have meaningful impact.” He calls this going from big data to big testing. You then take the insights learned from that testing and “apply your targeted data and proven tests towards delivering better customer experiences — through the web, mobile devices, call centers, in-store and in-person interactions, etc.” This, he claims, leads to the big experience.

Brinker writes that too much of what is written about big data discusses “analysis, not action.” He concludes, “It’s by connecting big data to big testing and big experience that you turn that analysis into action. That’s modern marketing alchemy: transforming lead (data) into gold (better, more profitable customer experiences).” He calls the addition of big testing and big experience to big data, the “big leap” that is being made by marketing firms. I believe that what Brinker writes about (i.e., transforming big data lead into big data gold) is worth further discussion and that’s what will be discussed in the final segment of this series. 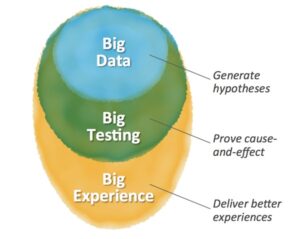 As I noted in yesterday’s post, Enterra Solutions® uses a process very similar to the one described by Brinker. We use artificial intelligence to help frame questions. Our Sense, Think, Act, and Learn® system powers an Enterra Hypothesis Engine™ that can propose and explore interesting potential relationships it discovers on its own, and test them much more rapidly than humans can potentially iterate. Our belief is that the current reliance on one-by-one human attempts to question an exponentially growing space of data is the main cause of the disillusionment that Brinker and Sicular believe is affecting discussions of big data. We believe that allowing AI to do the heavy hypothesis lifting our clients will get the big experience discussed by Brinker.