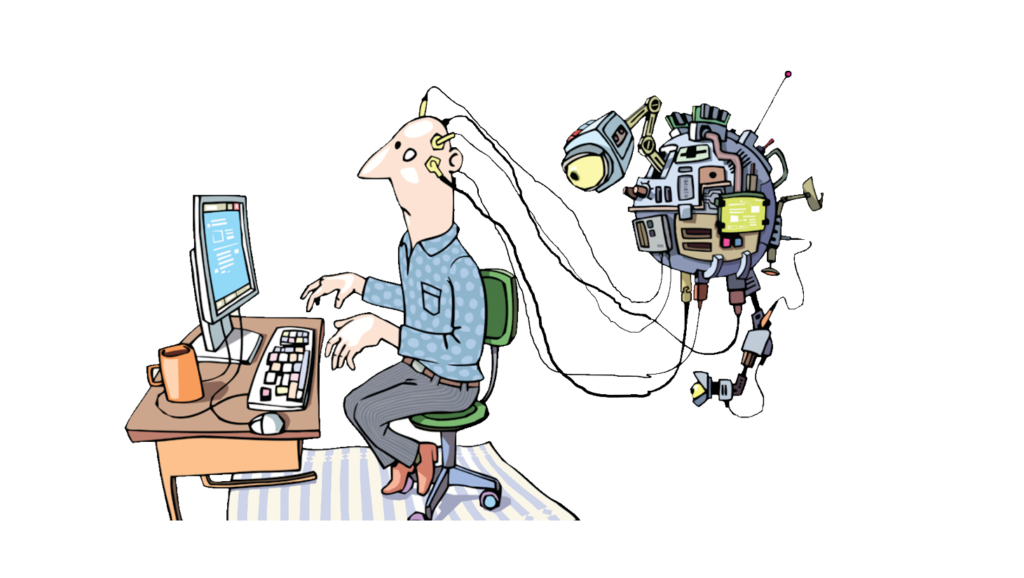 The Rise of Augmented Intelligence

Peter Bentley (@peterjbentley), a PhD computer scientist, asks a pertinent question: “Should we aspire to augmentation — using technology to enhance our abilities without replacing us?”[2] He adds, “As artificial intelligence and robotics mature enough to become integrated into everyday life, we need to start making this choice. We need to choose wisely, or we might just automate ourselves and the natural world out of existence.” From his last comment, it should be clear that Bentley believes augmented intelligence is the preferred course of action.

Technology writer Priya Dialani (@priyadialani248) asserts, “There’s a call to rethink Artificial Intelligence as Augmented Intelligence, to stress the capability of people working with AI instead of being replaced by AI.”[3] She adds, “Augmented Intelligence is a technological approach dependent on big data that joins techniques of machine learning, natural language processing, and data analytics intending to produce relevant data for targeted choices. It is a development of artificial intelligence that includes human association in a procedure of constant inclusion, focused on improving the results obtained.” In other words, augmented intelligence is founded on the belief that humans and computers achieve the best results when working together.

If Rometty thought cognitive overload was a challenge prior to the pandemic, Matt Brown, former President of Americas & Asia-Pacific at Signal AI, insists the problem has only grown more acute. He explains, “While so many facets of our lives and the economy have been disrupted in recent months, one challenge facing the business community is the overwhelming amount of news, discourse and associated risk management; companies are faced with balancing both information overload, and information scarcity.”[4] Like Rometty, Brown believes augmented intelligence is essential to meet the challenge. He writes, “Some of the most powerful and impactful AI tools are those that help or augment the human experience. The idea of AI systems that augment human capability is known as Augmented Intelligence. … AI allows businesses to surface levels of external data, information and insight that would have traditionally been inaccessible. From analyzing complex content and sentiment to categorizing subject matter within documents, AI helps organize information in an understandable format, within seconds of the content being published. This is an impossible task for a human to do without technology, and eminently more effective when combined with human intelligence.”

Vaclav Vincalek, a technology entrepreneur, believes augmented intelligence is better than artificial intelligence because humans can deal better with ethical situations and bias. “Biased humans,” he insists, “can’t create unbiased algorithms. We’re as likely to make things worse through unintended consequences as we are to make it better by removing one or more types of human bias.”[5] According to Vincalek, the answer is “building technology that helps humans to make better decisions supported by access to better information.” He adds, “Here’s the new term I believe we should use for augmented intelligence: human intelligence supported with artificial intelligence. The objective is to help every person to reach their maximum potential.”

Of course, not all decisions involve bias or have an ethical dimension. In those cases, cognitive overload can be addressed by letting machines make routine decisions so that humans can concentrate on more nuanced decisions. At Enterra Solutions®, we are advancing Autonomous Decision Science™ (ADS™) to accomplish that goal. The Enterra ADS™ platform can make routine decisions with the effectiveness and judgment of your best human experts, leaving the real experts time to concentrate on more strategic decision-making.

The Business Benefits of Augmented Intelligence

According to Bentley, “The idea of augmenting our own intelligence with technology was first proposed in 1960 by an American psychologist and computer scientist called Joseph Carl Robnett Licklider, in an important article titled ‘Man-computer symbiosis’. … He believed that the new computer technology should be used for ‘intelligence amplification’ – not automation. … The whole philosophy of augmented intelligence is to put humans first, and technology second.” Tech writer Veda Aravali views augmented intelligence in that same light. “Augmented intelligence,” she writes, “is a design pattern for a human-centered partnership model of people and AI, working together to enhance cognitive performance, including learning, decision-making, and new experiences. It combines the strengths of humans with machines to give us an incredible boost in cognitive performance. It helps people be better rather than making them obsolete.” She goes on to discuss several ways augmented intelligence can benefit businesses. They include:

• Bringing on new staff: Aravali notes, “The new staff may not be familiar with the business’s way of working.” Augmented intelligence solutions with embedded, rules-based decision-making capabilities means new staff can be more effective from day one.

• Avoiding being blindsided: The world continues to change at a rapid pace. Decision-makers can no longer rely solely on historical data to make decisions about the future. As Aravali notes, “Blindsided companies are not seeing the information they need when they need it. Augmented intelligence can provide about your business, customers, employees, and competitors.” During the volatile conditions created by the pandemic, Enterra® created the Enterra Global Insights and Decision Superiority System™ to help clients keep abreast of the latest changes in the business environment.

• Creating positive customer experiences: Customer experience is becoming a top priority for omnichannel businesses who must operate in both the physical and virtual worlds. As Aravali explains, “Besides creating new product features, the business can also improve its customer experience. And customers are more likely to be satisfied if they can get their questions answered faster with technology like automated chatbots.”

• Improving Planning: Aravali writes, “Augmented intelligence tools can help with strategic planning. These tools help clean data sets and forecast future trends with predictive modelling, social trends, and customer feedback. This can help you create more effective marketing plans more quickly.” Using cognitive solutions, like the Enterra Trade Promotion Optimization System™, planners can run dozens of scenarios in minutes to determine which scenario shows the most promise. As a result, planning can be reduced from weeks or days to hours.

Bentley advises, “Augment your intelligence — use tech to make you better at what you do. The trick is to be aware that what you use will change you. So use solutions that put people first, solutions that enable you to make your own, more informed, decisions. Don’t be a victim of bad tech. Choose technologies that make you a superhuman.” Vincalek agrees. He writes, “Let’s use technology to empower humans to be better.” Historically, humans have developed technologies to enhance their natural abilities to make themselves stronger, faster, or to see better. Bentley concludes, “When applied for the good of people, these new, advanced technologies have the power to make us better than we have ever been.” That’s what augmented intelligence aims to achieve.