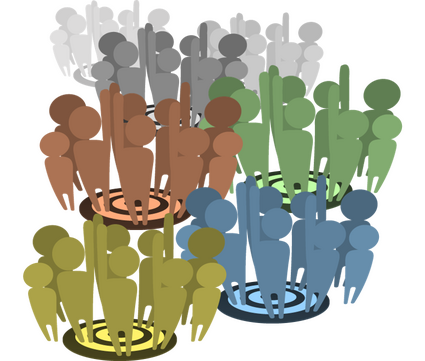 Millennials are often discussed as though they form a homogeneous (even monolithic) group. But as I have pointed out in several past articles, nothing could be further from the truth. That shouldn’t be surprising. The age spread of millennials (from late teens to early 30s) is large enough at this stage to make any generalizations about them a bit suspect. Felicia Greiff (@feliciagreiff), a Millennial journalist, is apparently tired of being stereotyped and, according to a new survey, she isn’t alone.[1] Greiff asserts, “Listen up, brands: What you have been told about millennials is (mostly) wrong. According to new research from Carat, based on 14,000 millennials aged 15-to-34, this age group doesn’t quite meet the stereotype of ‘hyper-connected optimistic digital extroverts.’ In fact, the stereotype applies to only about 42% of millennials, or about 36 million people. The other 49 million have been somewhat neglected under the assumption that they belong to the same monolithic group.”

Emily Badger (@emilymbadger) insists that the media can be blamed for much of the stereotyping that has taken place regarding millennials.[2] “Often in the media (and I’ll raise my hand here),” she writes, “we evoke the word ‘millennial’ to describe a subset of people born after 1980 who hold college degrees and live in cities. We’re not talking about 20-year-old single moms in small towns, or fast-food workers in the suburbs trying to get by on only a high school diploma.” The “urban bias” to which Badger refers is easy to understand. Big media outlets are all urban-based. Most of the world’s population now lives in urban areas. Cities are where the greatest concentrations of wealth can be found. All of those things appeal to the media and to marketers. Jed Kolko (@jedkolko) reminds us, however, that cities have held an attraction for young people in generations past and so it should come as no surprise that urban living looks attractive to millennials as well.[3] He writes:

Kolko goes on to point out that there is a specific segment of millennials that fit the urban stereotype discussed by Badger. “College-educated millennials aren’t living in cities just because their tastes are urbanizing — other demographic factors also play a role,” he writes. “Almost half of the increase is explained by their being less likely to be married or to have children today than educated young adults were a decade ago. Add in a few more factors, like race and ethnicity, and we can attribute more than half the post-2000 increase in college-educated young adults living in hyper-urban neighborhoods to changes in their cohort’s demographic composition.” While that’s good news for cities (who doesn’t want to attract young, educated, ambitious people?), marketers who target only urban millennials are leaving a lot of other targets untouched. Greiff elaborates:

“Carat’s U.S. CEO and Global President, Doug Ray said marketing to millennials as one big segment is like marketing to an entire country. He said that problem might lie in the rush to amass behavioral data on millennials, focusing on cookie-level data that expires and doesn’t tell you about the person’s identity or mobile use. Then when one group’s digital voice is more easily tracked and studied than others’, it can lead to misunderstanding, as with millennials.”

To help marketers better understand various millennial groupings, Carat placed them into four segments. As explained by Greiff, they are:

‘Trend-Netters’ (42% of millennials) — This is the millennial stereotype or ‘digital extroverts spreading trends and experiences,’ according to Carat. [Michelle Lynn, Executive Vice President and Managing Director of Dentsu Aegis Network,] added that the group is fashionable, pop culture-savvy and impulse-driven. Because they’re constantly using devices to review, endorse and share, their voices are easily heard and tracked, often making them the public face of their age group. They like brands that communicate luxury and status. This group is ‘current,’ Ms. Lynn said, but not true trendsetters.

‘Alter-Natives’ (23% of millennials) — Skewing younger, this group represents the ‘non-conformist digital native’ who tends to be more privacy-aware online, according to Carat. ‘They only want to share with select people. … And only let us know what they wanted us to know. They feel comfortable online on their own terms,’ Ms. Lynn said. She added that the group’s privacy concerns may be a reaction to witnessing over-sharing online. The group tends to live at home with parents, use older gadgets and prefer transparent brands.

‘Lifeprenuers’ (19% of millennials) — Ambitious and lifestyle-aware, this group likes to balance work, home and health by setting boundaries. They’re couponers who like reliable and practical brands. ‘This group is a little old world with a twist,’ Ms. Lynn said. ‘Digital is one of many things in their world. These people are okay with stepping away from [technology].’

‘BetaBlazers’ (16% of millennials) — These are trendsetters with an adventurous spirit. This group tends to be more ‘effortlessly worldly’ than the ‘Trend-Netters,’ Ms. Lynn said, and they read high-brow and niche publications that represent different points of view. On this segment’s brand preferences, Ms. Lynn said, ‘It’s not the most popular brand necessarily, but it’s the one they seek out. Everything is a little more exclusive. They’re really the ones that are about story-driven brands. That story is an indicator of quality.’

Frankly, even those segments are too broad to provide effective personas for targeted marketing; but, they are a good start. Refining those personas for a particular business is important since millennials represent the market that will be most important for the next couple of decades. Hilary Stout (@hastout), writes, “Not since the baby boomers came of age has a generation been the target of such fixation.”[4] She goes on to explain why companies are so fixated on millennials:

“This most coveted generation is huge — about 80 million strong in the United States, larger than any other demographic group. And it recently crossed a milestone: As of March there are more millennials in the American work force than Generation Xers or baby boomers, according to the Pew Research Center. The consulting firm Accenture estimates that millennials will spend $1.4 trillion annually by 2020, and they are expected to inherit about $30 billion in the coming years.”

Little wonder that companies want to get in front of that money. David Moth (@DavidMoth), Social Media Manager at Econsultancy, believes some of the most important data you can analyze concerning potential customers is past behavior. He believes that past behavior is one of the best indicators of future behavior and that information can be effectively used to target potential customers.[5] “In a nutshell,” he writes, “behavioral marketing is the practice of serving targeted ads or content based on a user’s past actions and behaviors.” He elaborates on why he believes behavioral marketing is more effective. He writes:

“The reason being that if ads are more relevant to the user, there’s a higher chance they will react in a positive manner (i.e., buy something). Though this all sounds very simple, it’s only made possible by a lot of technical wizardry. User profiles are constructed based on a broad range of data, including:

All of which needs to be collected, analyzed, and turned into actionable insights. … Ultimately it enables marketers to move far beyond ‘batch and blast’ messaging, and is also an improvement on using segments or personas. By using behavioral marketing brands can personalize messages to individual customers.”

Cognitive computing systems, like the Enterra Enterprise Cognitive System™ (ECS), can help integrate the kinds of data that targeted marketing requires. Cognitive computing systems are more likely to discover the actionable insights to which Moth refers because they are better at providing context for much of the unstructured data upon which targeted marketing relies. As noted above, millennials really represent a number of targets not a single target; which means that a lot more granularity needs to be involved if Generation Y is going to be properly segmented for marketing purposes.