Some Thoughts About Disruptive Innovations

Helge Tennø, a Digital Director at Dinamo AS in Oslo, Norway, recently penned an interesting blog in which he connected Kevin Kelly’s thinking about technology with Clayton Christensen’s thinking about disruptive innovation. He writes, “By downplaying technology’s role in shaping businesses and industries, companies make themselves vulnerable to emerging threats.” [“Disruption and imagination,” 180.360.720, 7 August 2013] Tennø notes that we need to think broadly about the term “technology.” It refers to things “as big as the alphabet, science, communication and as small as shoes, chairs or Bluetooth.” Most importantly, disruptive technologies have two overarching effects. They change “peoples’ habits and behaviors” and they disrupt “business ideas and business models.”

Tennø believes that disruption occurs “when a firm uses technology in a new way and manages to offer customers relevant value outside the current comfort zone and abilities of the established players.” He points, for example, to Henry Ford’s application of the production line to produce cars that his employees could afford. He writes that “more current examples are booksellers, airlines and travel, banks and finance, media, hotels, education, insurance and electrical providers.” He writes:

“Disruption is a very hot topic today because we are at a time when technology is infiltrating industries core infrastructure and value propositions. The cloud / connected internet, mobile, participation, etc. proposes in a lot of cases such a radically different way of offering or thinking about an offering that disruption is often more than ripe – just waiting to get plucked by small companies, sometimes even unconsciously, digging at an industry from the bottom (which is the trademark of disruption – ‘it’s not the one you see that kills you’).

“Unfortunately, even if most companies today use the Internet, I suggest they are mostly doing it to replicate existing infrastructure (many company websites are digital copies of existing content or services already rendered by Customer Service) – companies are not imaginative enough to see how the technology enables them to think differently about their offering, relationship, market, business model etc.:

‘The only thing keeping most big companies from creating new categories is their lack of imagination – their inability to see beyond what they’re selling today.’ – Eddie Yoon and Linda Deeken, Why It Pays To Be A Category Creator, HBR, March 2013″

Management guru Gay Hamel sees things the same way that Tennø does. He claims they get in that conundrum by boxing themselves in with the wrong question. He told Steve Denning:

“Both Amazon and Apple are classic examples of what I wrote about in the article with C.K. Prahalad in 1990 entitled, The Core Competence of the Corporation. That article argued that the building block for growth is not so much strategy as these deep capabilities that you build and that are very hard to replicate. … A few years ago, nobody I knew in the idea industry was predicting that Amazon would be the most successful player in Cloud computing, or that Apple would move from computers to music devices to mobile phones to tablets. Yet it is completely logical if you have a competence view of the firm and you see how they continue to leverage that core competence in new ways. Apple and Amazon never made the mistake of getting stuck on the famous question, ‘What business are we in?’ Once you ask that question, you start asking: ‘What assets do we have? And where do we leverage them next?’ Once you frame the question that way, the game is almost over.” [“Gary Hamel On Innovating Innovation,” Forbes, 4 December 2012]

One of things I liked most about Tennø’s article was the discussion of something he calls “the Opportunities Matrix.” He notes that the Matrix “offers some ideas [about] where new opportunities arise as technology enables new human behavior or habits.” 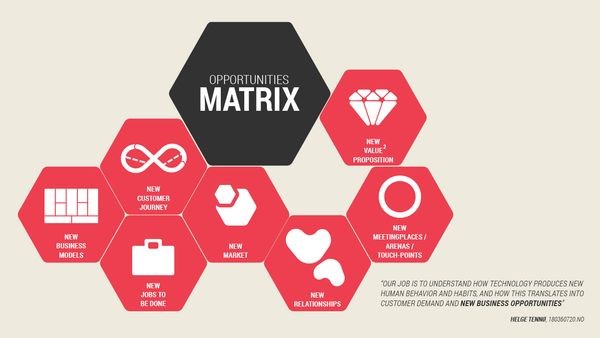 Too often people fail to see opportunities because they continue to view life from the same perspective. Creativity coaches teach techniques that force people to see challenges from different perspectives so that they can consider different approaches for solving it. The Opportunities Matrix does a similar thing. Each red hexagon in the matrix offers a new window (or perspective) through which businesses can consider how they can leverage their core competencies in new ways. It provides them the opportunity to be the disruptor rather than the disrupted. The Matrix helps you overcome the Innovator’s Dilemma described by Christensen (that is — how to serve your core business while finding new markets and watching out for new entrants that could be lurking in your blind spot).

“Most companies thrive by incrementally upgrading their existing offering and keeping all competition at bay. This is true, generally speaking an estimate 70% of current return on shareholder value will most likely be the result of incremental innovation (efficiency or sustaining), but if we look at companies future income, and if we look at where they will most likely be disrupted, it is through the innovative use of technology – seeing new needs and new customer demands and working hard at accommodating it. This (a company’s future income) is why disruption – and imagination – might be the most important investments companies look into in these times of great technological opportunity. Now what they need are better, and faster tools for seeing, and acting, on those opportunities.”

“We need to allow our brains to think the unthinkable – that is, suspending the pressures of what can be done today and shifting to the question of ‘what if?’. … Suspending judgment and innovating has occurred in countless home offices, garages and living rooms as it has in corporate meeting and board rooms. Yet, given the need for more (and more rapid, large-scale) innovation as we face climate change and other ecological issues, it seems apt to ask how we go about supporting innovation. … What if there were a centre focused on disruptive innovation, and transforming major societal systems sustainably (with robustness and resilience in mind) particularly where IT, energy, food, agriculture and finance meet? What if prospective innovators came out of their day-to-day urban lives – into a forested or grassland landscape, with blended human and ecological health and resilience that is (mindfully) at the core? And what if the process that prospective innovators went through in such a new centre would submerge them within a space of systems analysis of intended and unintended consequences associated with their emerging new inventions and business ideas? … What if we really took seriously the innovation needs that our societies face – such as, climate change, ecosystem impacts, biodiversity loss, inequitable access to education, information and capital, and many other issues – and crafted more unusual settings to foster, pressure test and launch those innovations? What if Einstein was right and the thinking (in this case, about innovation) that got us into this situation is not the same thinking that will get us out of it? What if a new way of thinking about built systems could help us innovate to a new climate-adaptive, resilient world? Why not innovate that new centre into being?”

I’m a big fan of “what if” thinking because it is another tool that forces us to change perspective and think differently, and ask good questions. I agree with Waage that disruptive innovations are essential if the global economy is going to grow and new jobs are going to be created.