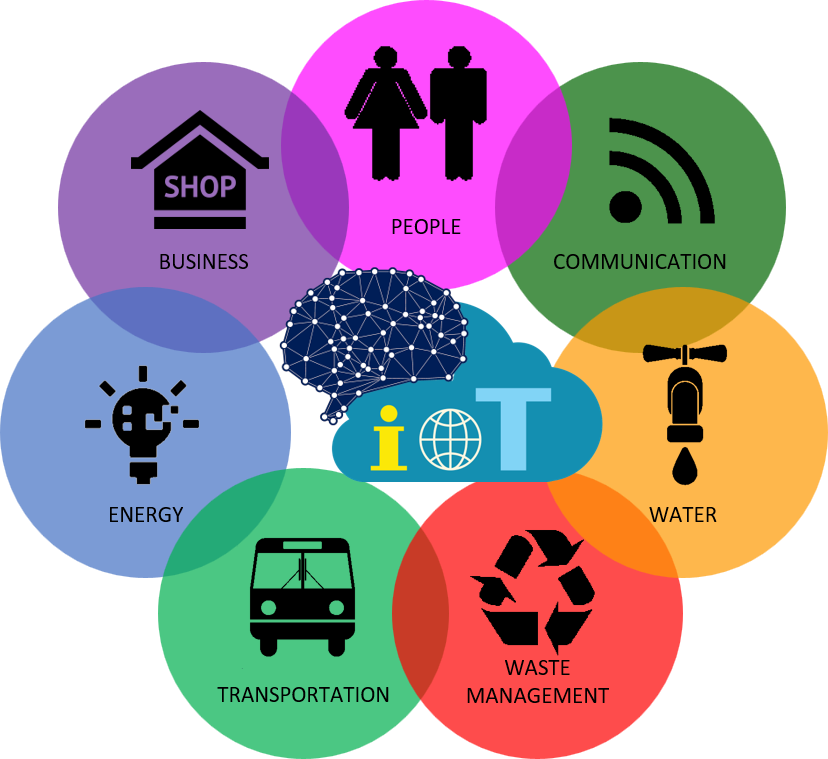 Kanumury Radhesh (@radhesh_k), leader of the Global Entrepreneur Program for IBM India and South Asia, offers this definition of a smart city: “A Smart City uses technology to enhance quality, wellbeing and safety of citizens. It provides means to engage more effectively and actively with its citizens and enterprises. And lastly, it helps city authorities to reduce costs and resource consumption for their cities.”[1] The only term I would have tried to inject somewhere in that definition is “systems.” IBM certainly believes that systems are important to cities. In fact, IBM believes that cities are based on six core systems that should be optimized both individually and holistically. Those “systems” are: people; business; transport; communication; water; and energy. I would add a seventh system — waste management (which would include both trash and sanitation). Although systems, such as, transportation and water systems, can be made more efficient using siloed data, the real benefits of making cities smart using big data analytics will come when data can be integrated to discover new relationships between systems. So here’s my preferred definition of a smart city:

This definition not only succinctly defines what a smart city is it establishes the right priorities for planning and implementation, namely: people then systems. Too often smart city priorities begin with technology rather than starting with how that technology could affect peoples’ lives. Roberto Saracco, President and Node Director of the European Institute for Innovation and Technology (EIT) Italy, reminds us that “Cities have always been ‘smart’.”[2] He explains:

“Cities have always attracted people to move from the countryside into their boundaries because they have been perceived, through the centuries and millennia (the first historically recorded urban settlements with thousands of people go back to 5,000 years ago, in Mesopotamia, Indus valley and Egypt) as the place to be. First it was about storing agricultural products, then about creating wares and protecting the riches (and citizens) from assaults that those riches invited. These ‘riches’ were agricultural surplus initially and then they were complemented and overtaken by artisans’ products. Indeed, what characterized cities was their infrastructure. The better the infrastructures the more attraction existed to people to move into the cities. Cities were born in symbioses with infrastructures, natural ones first like rivers, then roads and more recently logistic, telecommunications and education infrastructures.  Infrastructures make a city possible (water, sewage) and make it effective in managing resources and producing wealth.”

In a subsequent article, Saracco elaborates on that theme by noting that part of what has made cities “smart” through the ages have been the technologies they have used to create systems. “Don’t think that technology is something recent,” he writes. “Technology and its application go back in time and was a fundamental component of sophisticated infrastructures. … Advances in technology [have] led to leap[s] in infrastructures effectiveness.”[3] In a third article, Saracco addresses urban systems and how they help keep cities in dynamic equilibrium.[4] He asks us to keep one thing in mind as we discuss smart cities, “There are no ideal cities, there never were, there never will be.” He continues:

The modern “smart cities movement” is about catching up with and then trying to keep ahead of urbanization. As you are probably aware, more than half the globe’s citizens now live in urban environments and that percentage will continue to grow in the coming decades. Only advanced technologies are capable of meeting the challenges associated with urbanization. Saracco writes:

“The binding of economics, resources, infrastructures and service quality is such that any city has an equilibrium point that is a tradeoff between the well being of citizens and its economic sustainability. At least this has been the case for centuries. An interesting question is if a different tradeoff can be achieved thanks to the progress of technology. Empirically, we can see that today’s cities are better in their capabilities to manage larger group of people (megalopolis did not exist in the past simply because infrastructures were not available to support them). However, as technology has allowed cities to increase their ‘capacity’, problems have also got bigger and more challenging. As they say: ‘4-wheel drive gets you stuck in more inaccessible places’.”

Saracco’s most profound point is that the smart cities movement represents a journey not a destination. “I know that I am going against the flow, and declaration of many,” he writes, “but I feel that we will never have a Smart City.” Although that may sound like Saracco believes the smart cities movement is an exercise in futility, that’s not the case. He simply believes that his perspective provides a more realistic framework in which to proceed with smart city initiatives. “A new science of cities is born,” he writes, “the one studying cities not as ‘machines’ but as ‘organisms’. The approach is rooted in the mathematical theory of complexity.” Two points need to be made concerning Saracco’s statement. First, organisms, like machines, have systems; and, second, complexity is best addressed with technology. The foundational new technology upon which smart city initiatives must be built is broadband connectivity. “No industry or household in the world will reach their future potential without access to broadband,” write Adie Tomer (@AdieTomer) and Rob Puentes (@rpuentes), “it is the electricity of the 21st century.”[5] For cities, the broadband network that is predicted to have the greatest impact on systems is the Internet of Things (IoT). The Internet of Things will not only help make cities smarter, it will help make them more resilient because monitored urban systems will be much better understood. The IoT will generate mountains of data that can be analyzed and correlated to provide new insights, unexpected relationships, and new directions. Saracco concludes:

“Smart is not a destination, at least in my view. It is a long, and winding, road that has to be followed. As new needs surface (population increase, changing culture, new challenges) new solutions will have to be found and pursued. At the same time the relentless evolution of technology (we do not see an end in this century) makes new approaches and solutions available that are more effective and that make existing solutions no longer optimal. … Hence, I feel it is important to look at the direction, at the path and be smart in pursuing it.”

Saracco notes that not all cities will be able to afford the technologies that could help make them better. However, as technologies get more affordable, even poorer cities should be able to take advantage of things like the IoT and mobile technology and continue their smart city journey.