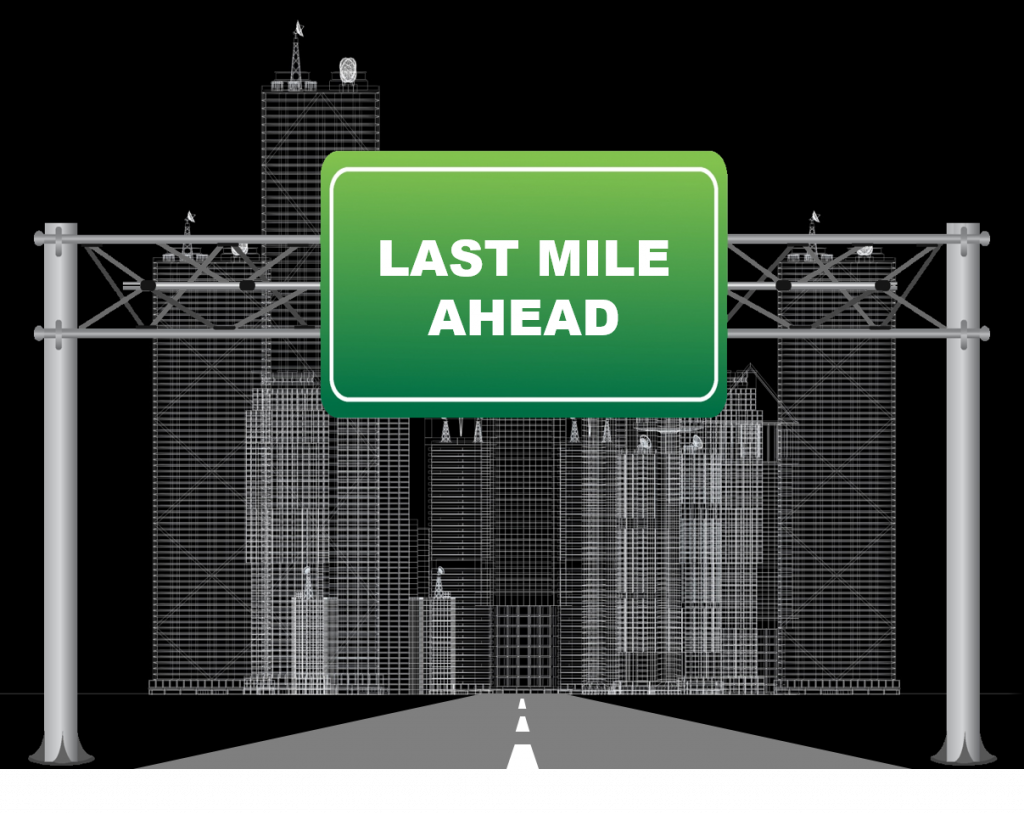 As cognitive computing systems and the Internet of Things (IoT) continue to mature, there will be more and more written about how they can be used to help transform cities into smart cities. The picture often painted about the smart city of the future shows uncrowded streets, thanks to convenient mass transit and an increased number of pedestrian malls. A topic seldom raised in these discussions is the matter of last-mile logistics. Cities that fail to master the last-mile logistics challenge should never earn the “smart cities” label. Some pundits dream of a day when cities restrict traffic to a limited number of routes so that people can cross streets anywhere in safety and children are allowed to play stickball without fear of being run over. Neal Peirce (@NealPeirce), editor of Citiscope, reports that one such dreamer is Enrique Peñalosa, former mayor of Bogota, Colombia, who proposed “a radical ‘green’ and ‘safe’ prescription for building and rebuilding streets, both city and suburban.”[1] Peirce explains Peñalosa’s plan:

Frankly, such radical plans aren’t likely to be implemented in most existing cities. They would simply create too many new challenges (e.g., garbage collection, deliveries, parking, etc.). Since city fathers don’t have the luxury of planning from the ground up, they must deal with things as they have evolved. I would like to concentrate on the last-mile delivery challenge. Drive through New York City (or any other large, established metropolis) on any given work day and you will find dozens of delivery vehicles double parked as suppliers try to fill the shelves of retailers so they can meet the needs of their urban customers. The need to supply retailers won’t go away simply because you want to fill cities with generous numbers of auto-free streets and with greenways reserved for pedestrians and bicycles. First, let’s look at the subject of increasing the number of pedestrian malls. Mark Harden (@MHardenDenBiz), director at the Denver Business Journal, reports, “Sooner or later, most [U.S. urban pedestrian malls have] failed.”[2] He continues:

“Some 85 percent of the pedestrian malls once in existence in America’s downtowns eventually were partially or fully reopened to traffic, according to research by the Downtown Memphis Commission published in 2008. Baltimore, Chicago, Philadelphia and Pittsburgh are among scores of cities that have reconverted malls partially or fully back to vehicular use. Sacramento, Calif., allowed cars back on four blocks of its K Street pedestrian mall in November 2011 for the first time in 42 years. And a handful of other cities are planning or discussing such a move.”

You might be wondering why there is such a discrepancy between Peñalosa’s vision of the future and the reality of American cities’ past experience with pedestrian malls. Harden reports that the Memphis research “pointed to recurring problems when a downtown street gets closed to traffic.” They include:

• Vacancy rates along the mall increase, and retail mix deteriorates.
• The retail focus shifts from “comparison and destination goods/services,” such as department stores and high-end retail, to convenience stores.
• The mall becomes an “uncomfortable and threatening environment,” attracting “loiterers and transients.”

The study concluded, “In most cases pedestrian malls in North America have experienced negative economic results from the original conversion.” Although I can’t be certain, I’m guessing that one of the reasons department stores were replaced by convenience stores was the difficulty department stores experienced getting stock delivered into areas where traffic was severely restricted. Additionally, department stores require large numbers of shoppers to remain viable and limiting parking without having convenient and affordable mass transit to replace it doesn’t help. Consumers would rather unburden themselves of their packages in the trunk of their car rather than having to manhandle them back home on a bus or subway. Surely, in this age of miracles, there must be some compromise solution this challenge. Any such solution must accommodate the movement of both people and goods. Part of the solution might involve the use of small autonomous vehicles. The vehicles must be small because many roads in established cities were built before the age of automobiles. Autonomous buses are already being experimented with around the world.[3] They are being joined by drones (both aerial and earthbound).[4] Frankly, I’m a bit skeptical about drone delivery in crowded places. Any compromise solution must keep in mind three trends. First, urbanization is going to continue. Second, urban residents will need good and services. And, finally, e-commerce is going to play a major role in meeting urban consumer needs.

When I look at those trends, two compromise solutions that spring to mind are a click & collect business model and e-fulfillment business model. Rather than trying to move large volumes of inventory to be stored on store shelves, the inventory could be held in suburban warehouses ready to be delivered to the city following an on-line purchase. There have been a number of interesting proposals put forth as to how such goods would move from the distribution center to the city. A few years back, the Economist published an article about the potential usefulness of pipes for moving packages in urban areas.[5] The article explained:

“Enthusiasts of the digital economy sometimes forget that bits are not everything. However important information is in transforming business, most of what is actually bought and sold is still physical goods, and those goods need to be delivered to the customer. Unlike information technology, though, freight transport has not evolved much during the past few decades. It takes only a few seconds to choose and buy something from an online store, but several days for it then to reach the purchaser. That process also burns oil, contributes to traffic jams and makes the planet’s atmosphere a little warmer by releasing carbon dioxide. Freight transport could thus use some fresh ideas. Or at least a new version of an old idea. And that is exactly what Franco Cotana, an engineering physicist at the University of Perugia, in Italy, has in mind. He proposes to revive, with a modern twist, an extinct technology called the pneumatic pipe.”

Cotana doesn’t envision sending packages through pipes using compressed air, he believes an entirely different technology will be used — magnetic levitation. He believes goods could travel through such pipes at an astonishing 1500 kph (772 mph). Designer Phillip Hermes also believes that pipes could be used to address the last-mile challenge. He recommends using sewage and draining systems for transporting goods.[6] The point is, there are ways to use existing infrastructure in new ways to help with the last-mile logistics challenge. The point of this article is not to propose a solution, but remind planners that solving logistic challenges need to be a key part of any smart cities initiative.