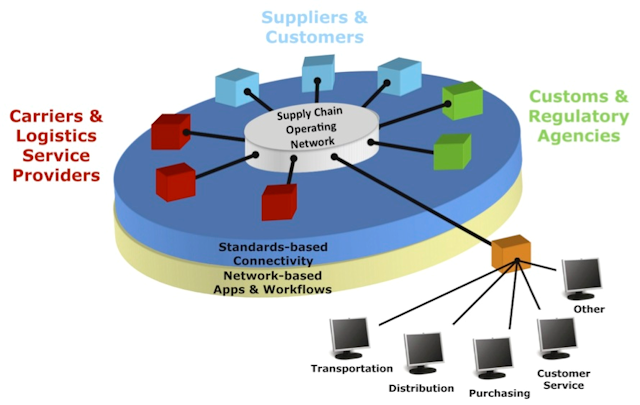 “Certainly you’ve heard of bitcoin,” writes the Spend Matters team. “But do you know about blockchain, the technology behind bitcoin? If not, you should. We believe it has the potential to be one of the top technologies in the supply chain.”[1] The team continues, “Few have written about blockchain to date with the same level of analysis as bitcoin, but those who have been are singing blockchain’s praises. ‘Pivotal’ and ‘potent,’ as it’s been called, the technology could meet the growing demand for transparency in the supply chain.” Spend Matters team members aren’t the only analysts who see a bright future for blockchain technology. William Mougayar (@wmougayar), a general partner at Virtual Capital Ventures, writes, “Yes, blockchains are geeky, (and the challenge is to take out that geekiness), but fairly soon, every company will have a blockchain, or be on a blockchain, or several ones.”[2]

Charlie Alsmiller (@calsmiller), Founder and CEO, Appterra, Inc., is also a proponent of blockchain technology; but, he understands most people are unfamiliar with the technology. “What do we call blockchain technology,” he asks, “so the people will understand it better?”[3] He admits, “Blockchain technology is not for average persons. It probably ranks on the 10,000th level of the nerd scale.” Alsmiller also knows that if blockchain technology is going to have a significant impact in the world of commerce, understanding it is essential. Alsmiller believes achieving the necessary level of understanding is not going to be easy. “In order to unpack the complexity of blockchain,” he writes, “some shiny marketing gloss should be placed on top. However, marketing to the masses will clearly take more than a 10-minute brainstorming session. It can be difficult to get mainstream consumers to trust their life savings to a decentralized bank or a blockchain-based insurance when they don’t understand the concept.”

Mainstream consumers, however, are not likely to be early adopters of blockchain technology. Businesses are much more likely to be early adopters of the technology. Why? Because it is one of the most secure financial transaction technologies that has ever been invented. Mike Gault, Founder and CEO of Guardtime, explains, “Imagine that you’re walking down a crowded city street, and a piano falls from the sky. As dozens of people turn to watch, the piano crashes down right in the middle of the street. Then, without a second to lose, every person who witnessed the event is strapped to a lie detector and recounts exactly what they saw. They all tell precisely the same story, down to the letter. Is there any doubt that the piano fell from the sky? This is the principle behind the blockchain, a powerful and widely misunderstood invention that could profoundly affect our relationship with the digital world.”[4] Alsmiller adds, “The blockchain is a massive decentralized trust machine and a distributed ledger technology. It is a programmable trust infrastructure that allows you to program your trust in the concept or the rules. This allows you to remove the systemic risk, which is one of the technology’s key benefits. Technically, it cryptographically validates secure web pages and pulls together data from them.” Kate Knibbs (@KateKnibbs) writes, “The blockchain is a simple digital platform for recording and verifying transactions so that other people can’t erase them later — and anyone can see them.”[5] The Spend Matters team explains a blockchain this way, “Information stored in the blockchain system is boiled down into a code or ‘hash.’ If someone tries to change the information, the hash will appear different, making it easy to detect any foul play.”

Detecting fraud or foul play in business transactions is obviously important. The Spend Matters team explains, however, that blockchain technology can be used for more purposes than financial transactions. “The security of the technology is designed to prevent any one person from altering the legitimacy of the information being exchanged over it,” the team writes, “which is why it seems like a great approach to bring more transparency to transactions in global supply chains.” Reid Williams (@_reidw_), a senior designer and engineer at IDEO Futures, promoted this idea earlier last year. He wrote, “Blockchains offer a way to introduce transparency into supply chains and to create entirely new opportunities for participation.”[6] He insists the technology could be used to answer questions like:

Dr. Jutta Steiner (@jutta_steiner), Chief Operating Officer of Provenance, also sees tremendous benefits from using blockchain technology to improve supply chain transparency. “Even with increased consumer awareness and new regulation,” she writes, “ensuring the authenticity and transparency of a product’s chain of custody has proven difficult. A new technology, called blockchain, has great potential to fix this.”[7] She elaborates:

“A blockchain is a shared database that is secure, open, auditable and runs without a single centralised operator. Specifically, blockchains enable users to transfer digital property to each other across expansive networks in a way that is safe, verifiable and prevents any party from altering or challenging the legitimacy of the information being exchanged, making it a promising tool for bringing greater transparency to complex global supply chains.”

Adrian Gonzalez also sees the potential in using blockchain technology in the supply chain. Early last year he wrote, “Much like the Internet triggered the evolution away from client/server applications toward Web-based apps, software-as-a-service, and today’s cloud solutions, the peer-to-peer, decentralized architecture of blockchain has the potential to trigger a new wave of innovation in how supply chain applications are developed, deployed, and used. The blockchain, in essence, could become the new operating system for Supply Chain Operating Networks — like Descartes, Elemica, GT Nexus, LeanLogistics, and others that combine B2B connectivity with software applications — and also help federate those networks.”[8] He included the attached graphic with his article.

Gonzalez concludes, “Thinking more broadly, the evolution of blockchain apps will ultimately intersect with what’s happening in the Internet of Things (IoT) world, where the ledger entries will be made automatically by the inventory and assets themselves as they move across the supply chain. (But I’m getting way ahead of myself, and way ahead of what most companies are willing or ready to implement in the near future.)” He may have been getting way ahead himself a year ago, but, if you believe other analysts, Gonzalez’ vision is likely to become a reality over the next several years. Spend Matters supply chain expert Jason Busch concludes:

“The ability to truly externalize a ledger with n-tier participants is incredible. For example, think about the ability for cascading POs, invoices, change orders, receipts, ship notifications, other trade-related documents and inventory data across a supply chain to move beyond basic matching to trigger threshold-based payments, replenishment, aggregation programs and more based on codified rules in a specific blockchain. What makes this possible is a new, externalized platform — a radical new type of system of record that brings with it shared rules, understanding and more.”

Secure information sharing is always a challenge and blockchain technology is likely going to be part of the solution in the decades ahead.