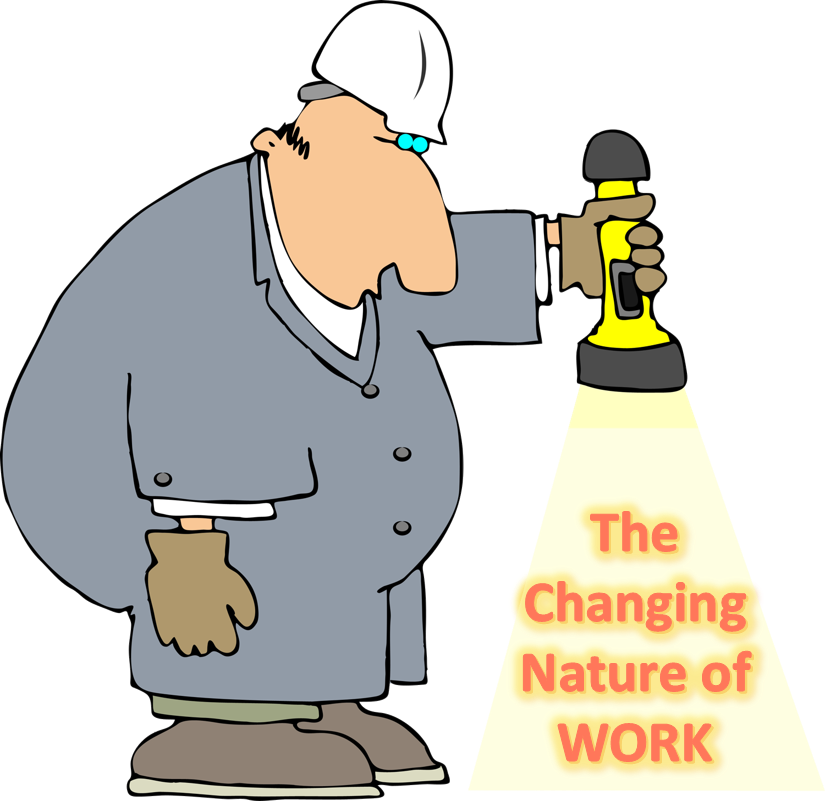 A little over a year ago, IBM CEO Ginni Rometty (@GinniRometty) declared, “It is the dawn of a new era, the cognitive era.”[1] Indeed, the maturation of cognitive computing and the advance of process automation is shifting the work landscape so dramatically some workers are finding it difficult to keep their feet. Novelist George Zarkadakis (@zarkadakis) goes so far as to predict we are entering a post-work world.[2] “As artificial intelligence and social robotics begin to replace tasks and jobs originally held by highly-trained humans,” he writes, “we are entering the uncharted waters of the fourth industrial revolution, or ‘second machine age’. The new machines are very much unlike their predecessors because of they are able to learn. They can thus evolve over time to become better and increase their performance.” He continues:

“Optimists suggest that by taking over cognitive but labour-intensive chores the intelligent machines will free human workers to do more ‘creative’ tasks; and by working side by side with us they will boost our imagination to achieve more, using their power for detail, ability to rapidly analyse massive data, and lack of psychological bias. Pessimists point to job losses, unemployment, and social unrest. But what is often missing from the current debate are the social and economic roles of companies as employers.”

Zarkadakis, along with Willis Towers Watson analysts, Ravin Jesuthasan (@RavinJesuthasan) and Tracey Malcolm, assert, “As businesses enter the unchartered waters of machine intelligence — where machines learn by experience and improve their performance over time — researchers are trying to predict its impact on jobs and work.”[3]

The nature of work has been evolving ever since humankind left its hunter/gatherer stage. What’s really different today is how fast the nature of work is changing. Zarkadakis notes that the first real disruptive break in the nature of work came during the first Industrial Revolution. He believes the next disruptive change came with the introduction of computers and Internet into the workplace. He insists the cognitive era will bring new disruptions to the nature of work. “We have entered the era of ‘uberization’, where digital platforms allow buyers and sellers to transact like never before,” he writes. “Companies are now becoming these platforms, providing the technology and security necessary to facilitate transactions. At the same time, work is disaggregating into activities that allow the implementation of talent-on-demand strategies. It is nowadays very rare to find an experienced professional who has been in a single company for most of their working lives.” Kristin Harris (@kristin1773), Marketing Manager at Deputy, notes the cognitive era is not just affecting jobs in the manufacturing and service areas. “With evolved smart machines,” she writes, “knowledge workers will soon find their career paths disrupted in the near future.”[4] She adds, “This change needn’t be seen as a negative.”

Zarkadakis, and his Willis Towers Watson colleagues, assert, “With technology, digitalization, and artificial intelligence accelerating changes to jobs, the relationships between performance and value become even more complex and yield potentially exponential opportunities for value creation. Return on Improved Performance (ROIP) — similar to Return on Investment — measures the value of improved performance in a given position (i.e., not just the value of average performance in a job). … Armed with this insight about the differential relationship between employee performance and value to the company, how can we apply the rapid advances in artificial intelligence to further enhance the impact of these roles? Indeed, how can we ensure that task automation does not merely reduce labor cost but also delivers increased performance for the human workers?” These are important questions. I believe the most likely future to emerge will be one in which humans and machines collaborate in the workplace. I’m not alone in this opinion. A couple of years ago, Daniela Rus, a Professor of Electrical Engineering and Computer Science and Director of the Computer Science and Artificial Intelligence Laboratory (CSAIL) at MIT, wrote, “Robots have the potential to greatly improve the quality of our lives at home, at work, and at play. Customized robots working alongside people will create new jobs, improve the quality of existing jobs, and give people more time to focus on what they find interesting, important, and exciting. … By working together, robots and humans can augment and complement each other’s skills.”[5]

Thomas H. Davenport (@tdav), a Distinguished Professor at Babson College, agrees that the nature of work is changing. He argues, however, that digital transformation is going to take a lot more effort than simply installing new technologies into the existing workplace. “Cognitive technologies are capable of transforming contemporary business processes,” he writes, “but they won’t do so without a concerted effort to redesign work around their capabilities.”[6] He explains:

“In order to achieve the productivity and effectiveness benefits that these technologies offer, companies will need to adopt, or readopt, business process reengineering approaches that were last popular in the 1990s. This time, however, they need to avoid some of the pitfalls that led reengineering astray in that period. … The primary competitive threat perceived by many established firms is no longer large Japanese companies [like in the 1990s], but rather nimble startups in regions like Silicon Valley. On the current technology front, perhaps the most disruptive collection of tools is found in cognitive technologies. This constellation of technologies, which includes deep and machine learning, natural language processing and generation, and older tools based on rule and recommendation engines, is currently capturing substantial attention as a source of business and workforce disruption. As in the 1990s, this generation of technologies can become a driver of work transformation. … Organizations need a set of management structures and best implementation practices to yield the benefits of which they are capable. In other words, we need a well-defined approach to ‘cognitive work redesign’.”

Zarkadakis and his colleagues suggest several steps companies can take “to rethink work in light of automation and AI” They include:

They conclude, “Recognizing how technology and AI can transform the performance and value equation provides a significant competitive advantage.” Davenport asserts “there are business process contexts for which [cognitive technologies] are particularly suited.” According to Davenport, these include situations:

As work is redesigned for the cognitive era, workers must also receive retraining and reskilling in order to ensure they are a good fit for the collaborative machine/human work environment in which they will find themselves.

Davenport concludes, “I don’t know if cognitive work redesign will achieve the level of visibility that reengineering did; perhaps it’s better that it doesn’t. But I am confident that these powerful new technologies won’t succeed without a systematic examination of how they can transform work. That old clichéd triumvirate of ‘people, processes, and technology’ became popular for a reason — we need all of them, no matter how impressive the technology is.” I agree with Davenport. The future will be brighter only if we ensure the “people” part of the triumvirate is prepared to take its place in this brave, new world.