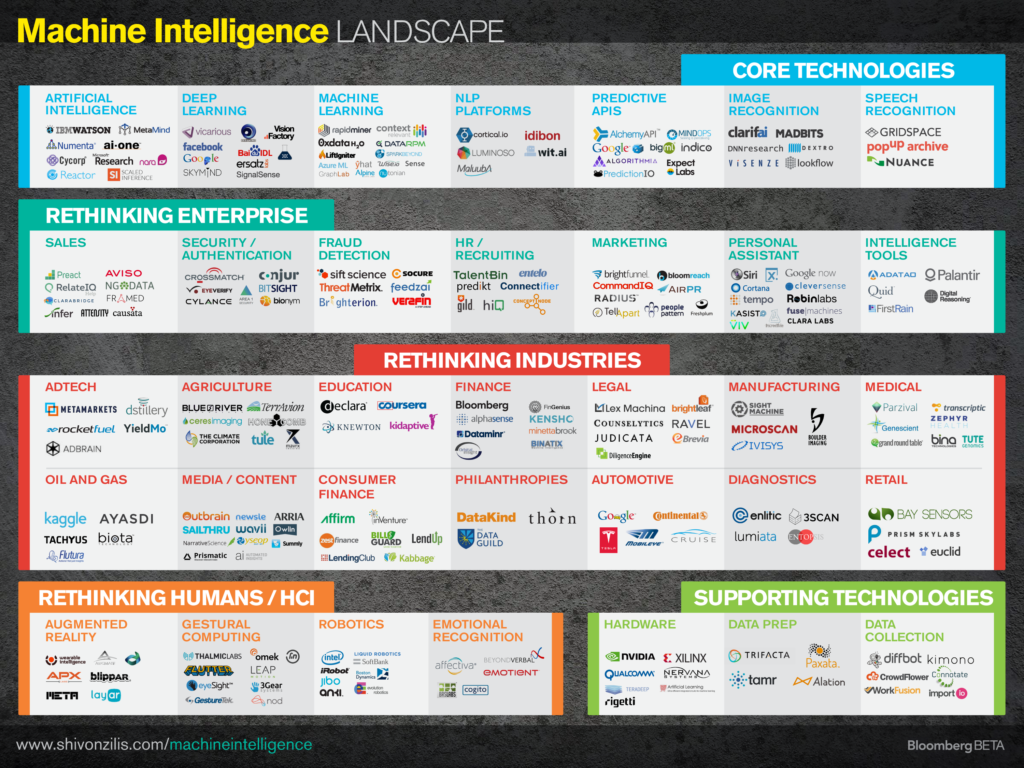 “Despite what Stephen Hawking or Elon Musk say,” writes Anthony Wing Kosner (@akosner), UX Lead at Vital Text Systems, “hostile Artificial Intelligence is not going to destroy the world anytime soon. What is certain to happen, however, is the continued ascent of the practical applications of AI, namely deep learning and machine intelligence.”[1] Kosner continues:

“The word is spreading in all corners of the tech industry that the biggest part of big data, the unstructured part, possesses learnable patterns that we now have the computing power and algorithmic leverage to discern — and in short order. The effects of this technology will change the economics of virtually every industry. And although the market value of machine learning and data science talent is climbing rapidly, the value of most human labor will precipitously fall. This change marks a true disruption, and there are fortunes to be made.”

Shivon Zilis (@shivon), a venture capitalist at Bloomberg Beta, also believes there is money to be made by companies engaged in artificial intelligence technologies. At the end of last year, she wrote, “I spent the last three months learning about every artificial intelligence, machine learning, or data related startup I could find — my current list has 2,529 of them to be exact.”[2] From her research, Zilis created a Machine Intelligence Landscape (found below) into which she placed some of the startups she could easily categorize. 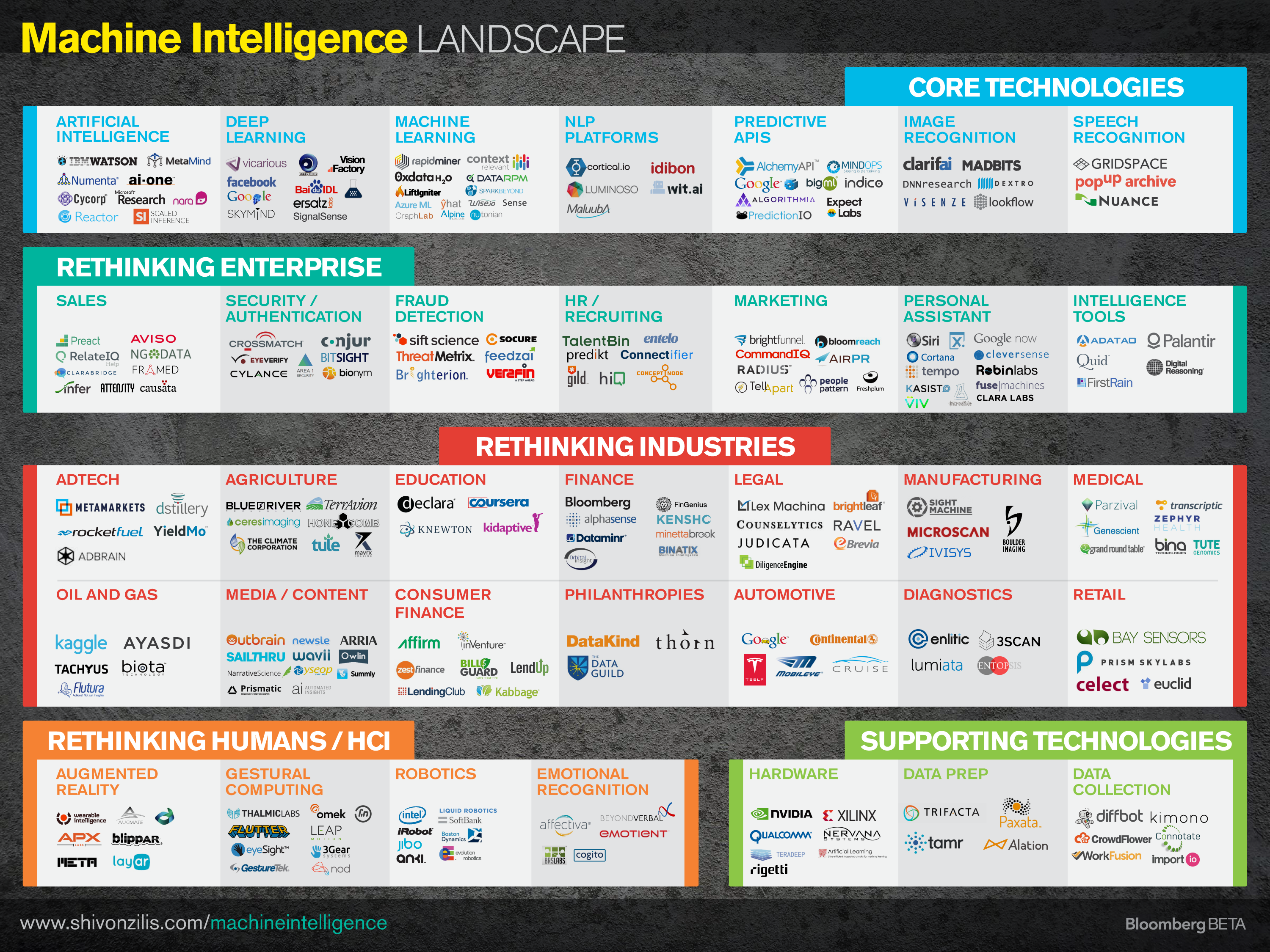 If I were categorizing my company (Enterra Solutions®) with its Cognitive Reasoning Platform™ (CRP), I would place it in the Core Technologies section. Enterra is involved in artificial intelligence, deep learning, machine learning, and natural language processing so it doesn’t fit neatly in any one box. Zilis prefers the term “machine intelligence” to cover the field. She realizes that term may cause some people to ask, “What is ‘machine intelligence,’ anyway?” She explains:

“[‘Machine Intelligence’ is] a unifying term for what others call machine learning and artificial intelligence. … I would have preferred to avoid a different label but when I tried either ‘artificial intelligence’ or ‘machine learning’ both proved to too narrow: when I called it ‘artificial intelligence’ too many people were distracted by whether certain companies were ‘true AI,’ and when I called it ‘machine learning,’ many thought I wasn’t doing justice to the more ‘AI-esque’ like the various flavors of deep learning. People have immediately grasped ‘machine intelligence’ so here we are. Computers are learning to think, read, and write. They’re also picking up human sensory function, with the ability to see and hear (arguably to touch, taste, and smell, though those have been of a lesser focus). Machine intelligence technologies cut across a vast array of problem types (from classification and clustering to natural language processing and computer vision) and methods (from support vector machines to deep belief networks). All of these technologies are reflected on this landscape. What this landscape doesn’t include, however important, is ‘big data’ technologies.”

Another term that Zilis could have mentioned, but didn’t, is cognitive computing. She includes IBM’s Watson in her landscape so she clearly understands that cognitive computing has its place in her taxonomy. I would argue that cognitive computing is near the apex of machine intelligence (with artificial general intelligence (AGI) being at the top). Cognitive computing is not designed to achieve AGI but to provide organizations with practical applications to solve challenges too complex to be addressed by other methods. Cognitive computing systems, by necessity, involve deep learning. In his article Kosner notes that deep learning is going to change the world in many ways — some changes will create social good and some of them will cause social pain. Kosner notes that Jeremy Howard (@jeremyphoward), now the founder and CEO of medical diagnostic startup Enlitic and previously President and Chief Scientist of Kaggle, is a proponent of deep learning, but also recognizes that deep learning systems could put a lot of people out of work. Howard claims “deep learning is now becoming capable of providing the kinds of services that currently employ 80% of the developed world.” Kosner writes, “Machine intelligence, broadly speaking, is a set of technologies that will solve some problems and cause others.” If you have a spare 20 minutes, you might want to watch Jeremy Howard’s TEDx talk about machine learning.

Kevin Kelly (@kevin2kelly), the founding executive editor of Wired magazine, asserts that the rapid upsurge in interest in machine learning and artificial intelligence is the result of three breakthroughs: cheap parallel computation; big data; and better algorithms. “This perfect storm of parallel computation, bigger data, and deeper algorithms generated the 60-years-in-the-making overnight success of AI,” Kelly writes. “And this convergence suggests that as long as these technological trends continue — and there’s no reason to think they won’t — AI will keep improving.”[3]

The one thing that almost all pundits agree on is that artificial intelligence is going to change the world. Some pundits believe that AI poses a grave threat to humanity while other pundits believe that AI systems are going to be tools that humans can use to improve conditions around them. It would be foolish to predict which school of thought is correct this early in the game. In the near-term, however, I predict that those who believe that AI systems are tools to be used by humans are going to be proven correct. Irving Wladawsky-Berger is firmly in that camp and he believes that Kevin Kelly is as well. “What should we expect from this new generation of AI machines and applications?” asks Wladawsky-Berger. “Are they basically the next generation of sophisticated tools enhancing our human capabilities, as was previously the case with electricity, cars, airplanes, computers and the Internet? Or are they radically different from our previous tools because they embody something as fundamentally human as intelligence? Kevin Kelly — as am I — is firmly in the AI-as-a-tool camp.”[4] In a future article, I’ll discuss why Wladawksy-Berger and Kelly are more optimistic than pessimistic about AI and the future of mankind.

One of the reasons that Zilis believes the future of machine intelligence is bright is that a number of the startups she investigated have already been acquired by other companies. She writes:

“I was surprised to find that over 10% of the eligible (non-public) companies on the [Machine Intelligence Landscape] have been acquired. … No jaw will drop when I reveal that Google is the number one acquirer, though there were more than 15 different acquirers just for the companies on this chart. My guess is that by the end of 2015 almost another 10% will be acquired.”

Like Kosner and Howard, Zilis believes that “deep learning” will be magic words, and like Aladdin’s “abracadabra”, will open doors that could otherwise remain closed. Zilis asserts that if you can say, with conviction and credibility, “My company does deep learning for X,” … few words will make you more popular in 2015.” Companies are not looking for buzz words or promises, they are looking for specific applications can that improve their businesses and their bottom lines.