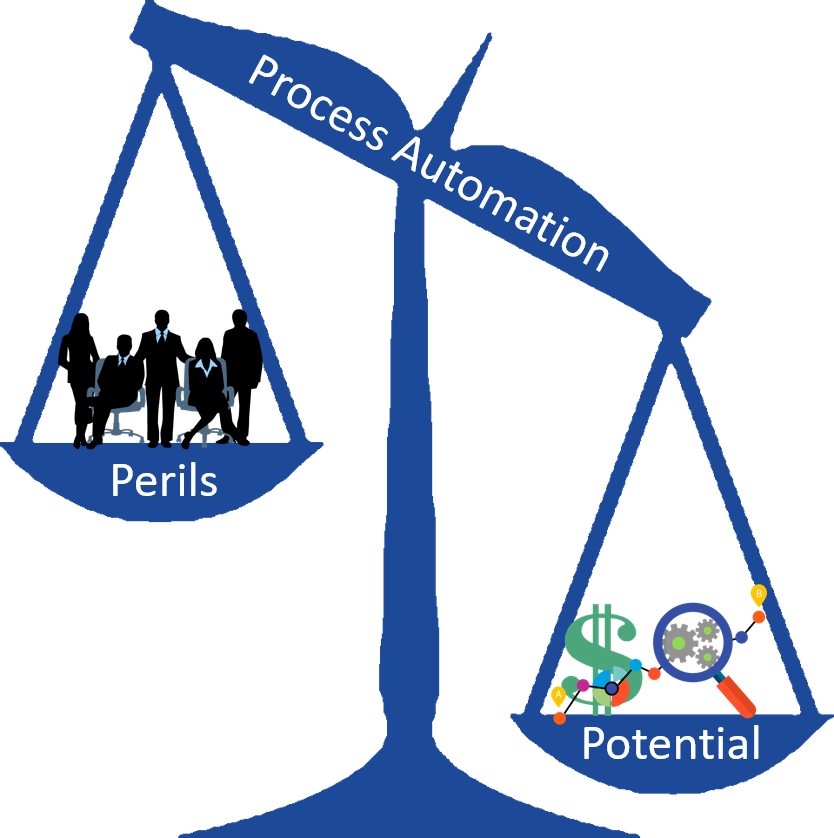 The Potential and Peril of Robotic Process Automation

Robotic Process Automation (RPA) is attracting a lot of attention both for its ability to generate great efficiency as well as the peril it represents to numerous jobs. Leslie Willcocks, a professor of technology, work, and globalization at the London School of Economics, defines RPA as taking “the robot out of the human.”[1] He explains, “The average knowledge worker employed on a back-office process has a lot of repetitive, routine tasks that are dreary and uninteresting. RPA is a type of software that mimics the activity of a human being in carrying out a task within a process. It can do repetitive stuff more quickly, accurately, and tirelessly than humans, freeing them to do other tasks requiring human strengths such as emotional intelligence, reasoning, judgment, and interaction with the customer.”

The Potential of Robotic Process Automation

According to a press release from Market Research Reports Search Engine (MRRSE), “IT robotic automation is a go-to solution for organizations to benefit from process automation and advanced analytics in operations and processes at economical prices, which was not possible with earlier automation approaches.”[2] The fact that today’s process automation systems can do things previous approaches were unable to do explains why RPA is garnering so much attention and why MRRSE predicts the RPA market is set to explode. MRRSE analysts note, “The technology holds strong promise in transforming workplaces and is expected to see adoption at an exponential rate the next few years. Transparency Market Research estimates the IT robotic automation market will expand at a CAGR of 47.1% over the period between 2016 and 2024. If the number holds true, the market will rise to a valuation of US$16,884.0 mn by 2024.” Rod Dunlap, RPA Director at Alsbridge, writes, “The technology reduces cost and enhances speed, accuracy, availability and auditability, and is being applied to tasks such as data entry, claims processing and access management in industries as diverse as insurance, retail and financial services. It’s relatively quick to implement — RPA systems can be deployed in a matter of weeks.”[3]

Jannie Strydom, CEO of LarcAI, insists process automation is not a nicety but a necessity in today’s business environment. “For organizations to succeed in an era where globalisation, hyper-competitiveness and rapidly accelerating business cycles are the foundations of business,” he writes, “they need to focus on reducing operational complexity, increasing agility and innovating more rapidly. At the same time, they will need to lower their costs. How can they achieve this? The answer lies in versatile and effective smart technologies that can deliver intelligent automation. Known as robotic process automation, this is a technology that is both disruptive and transformational, and offers such a vast array of benefits — including increased efficiencies, quality improvements, scalability and resiliency — that business people cannot ignore it.”[4] Carl Weinschenk (@DailyMusicBrk) calls RPA a great enabler. He explains, “A key enabler of robotics is robotic process automation. … Gartner refers to RPA as ‘gateway technologies’ and ‘surface tools’ that are atop the applications that they aim to automate. RPAs are sort of the poorly treated interns of the robotic world: They do all the drudgery and set things up for the more sophisticated software to take over (and get all the credit). The advantages are that RPA doesn’t have to be integrated into the deeper process and is inexpensive and simple to implement.”[5]

Process automation is also an important part of digital transformation — a journey most analysts agree companies must make to succeed in the years ahead. Ian Herbert and Aravindhan Dhayalan, Professors at Loughborough University’s School of Business and Economics Center for Global Sourcing and Services, assert, “RPA needs to be seen as a part of a longer term journey towards lights-out processing, which is first enabled by total digitalization, sensible self-service systems and appropriate standardization — all of which may create the possibilities for automation to: eliminate manual operations, enhance present operations, augment information flows and management decision making capability, and/or provide further options for robotic management and decision making. The key here is ‘augmentation’ not ‘replacement’ of human labor.”[6]

The Peril of Robotic Process Automation

Despite the fact that Herbert and Dhayalan stress the augmentation of human labor rather than its replacement, many analysts argue that RPA is going to eliminate a lot of jobs. As Dunlap notes, “[Software robots] can, cost as little as $10,000 a year to implement and maintain, and replace three to 10 human administrators. Considering, moreover, that robots can work 24/7 without vacation and sick days, the efficiency gains are significant.” Frank Wammes (@fwammes), CTO for Capgemini, reports, “Robots will take over 6 percent of jobs in USA by 2021, says a recent report by Forrester. Oxford University is even going as far as to say that by 2035, up to 47 percent of our jobs are at high risk of being automated. If that number doesn’t have an impact, imagine this: by the time the current generation of infants legally reaches adulthood, they will have done so in a world where nearly half of our current jobs may be automated.”[7]

Of course, RPA will not be the only (or even the primary) technology eliminating jobs; but, it will play a role. Susan Fourtané (@SusanFourtane) is skeptical RPA will eliminate as many jobs as some people think. “Artificial Intelligence (AI) is not exactly the end of our jobs as we fear,” she writes. “However, Robotic Process Automation (RPA) will impact various roles in the supply chain. In the process of change, we should be cautious of the hype around the AI trend. The best decisions come from looking at the trends with clear eyes.”[8] Even with clear eyes and a clear head, Fourtané admits, “By the year 2025, automation software is expected to replace about 140 million full-time employees across the globe. However, many new jobs will be simultaneously created to cope with the need for qualified workers needed to maintain, improve, and develop RPA software.” The question remains: Will enough new jobs be created to replace jobs eliminated by automation?

Willcocks believes companies will eventually go beyond RPA because RPA has limitations. He explains, “RPA deals with simpler types of task. It takes away mainly physical tasks that don’t need knowledge, understanding, or insight — the tasks that can be done by codifying rules and instructing the computer or the software to act. With cognitive automation, you impinge upon the knowledge base that a human being has and on other human attributes beyond the physical ability to do something. Cognitive automation can deal with natural language, reasoning, and judgment, with establishing context, possibly with establishing the meaning of things and providing insights. So there is a big difference between the two.”

Dunlap writes, “Companies have traditionally operated under the assumption that it makes sense to improve processes before automating them.” He adds, however, that new technologies “may be turning that conventional wisdom on its head.” Because RPA simply follows programmed rules, it can’t improve processes; however, Cognitive Process Automation™ (CPA) can. As Bill Gates once noted, “The first rule of any technology used in a business is that automation applied to an efficient operation will magnify the efficiency. The second is that automation applied to an inefficient operation will magnify the inefficiency.” CPA can change that thinking. CPA will be powered by cognitive computing platforms, like the Enterra Enterprise Cognitive System™ (ECS) — a system that can Sense, Think, Act, and Learn®. Cognitive computing combines artificial intelligence, advanced mathematics, and natural language processing. It can be applied to an almost unlimited number of business use cases, including process automation.

Despite the perils to employment posed by process automation, Willcocks observes, “In every case we looked at, people welcomed the technology because they hated the tasks that the machines now do, and it relieved them of the rising pressure of work. Every organization we have studied reports that it is dealing with bigger workloads. I think there will be an exponential amount of work to match the exponential increase in data — 50 percent more each year. There is also a massive increase in audit regulation and bureaucracy. We need automation just to relieve the stress that creates in organizations.” In other words, the benefits of process automation far outweigh potential perils. Is it time for your company to jump on the bandwagon?