“The role of digital has become so profound that it is less about how much consumers incorporate it into their lives and more about how much individuals live their lives within the digital realm,” writes a team of McKinsey & Company analysts. “When it comes to shopping, for example, digital is not just a tool that consumers reach for at the moment of transaction. Internet-connected devices have become the portals through which consumers engage the entire end-to-end customer decision journey.” [“Digital intelligence: Profiles to profits in a new consumer landscape,” by Francesco Banfi, Andrea Ghizzoni, Eric Hazan and Andrea Travasoni, Telecom, Media, and High Tech Extranet, 10 April 2013] The authors go on to note:

“In the consideration and evaluation stages of the purchase journey, for example, shoppers heavily engage online resources. Online reviews have the greatest influence on purchases, and in many markets most sales are preceded by searching or researching online. And – after extensive pre-purchase research online – consumers stick with digital at the point of making the actual transaction.”

In other words, the digital path to purchase is too important for manufacturers and retailers to ignore. Compete, a marketing company, agrees completely. “Mobile has long been thought of as an emerging channel, yet data recently collected by Compete sister company LightSpeed Research suggests that mobile should no longer be thought of as an emerging channel for consumers. 54% of consumers report having access to a smartphone with Internet access – approaching the number of consumers with a laptop and/or desktop computer.” [“Aligning Mobile Marketing With Consumer Behavior,” Compete Pulse, 11 March 2013] To reinforce this sentiment, the company provided the following infographic based on research conducted by LightSpeed. 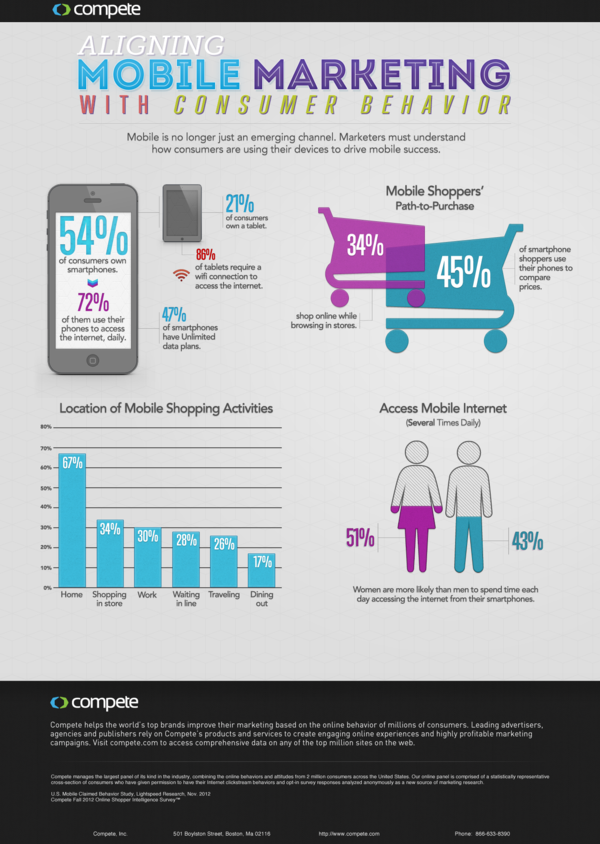 The McKinsey analysts conclude that the digital path to purchase will become a larger focus for marketers — a trend they are already seeing. They write:

“Many consumer companies are seeing the valuable efficiencies of digital marketing and are heavily shifting their advertising budgets from traditional media (e.g., radio, out-of-home) to digital media – in fact, this is the only growing segment in advertising. In 2010, less than one-fifth of money spent worldwide on advertising was directed toward digital channels. Just three years later, that share has grown to one-fourth and some projections place digital’s share in overall advertising at nearly one-third in 2017 with double-digit growth expected. Although digital offers more sophisticated measurability compared with other media, its potential has not yet been fully tapped.”

The Compete article concludes that it is important to understand “not just the degree that consumers shop on different devices, but what specific areas of content are most relevant/useful.” Joel Rubinson agrees that consumer behavior is critical to the future of marketing. He believes, “Marketing will transform from being a battle for the mind to becoming a battle for behaviors.” [“From mind marketing to behavior marketing,” Joel Rubinson on Market Research, 14 March 2013] He explains:

“In traditional marketing, we ran mass advertising, targeted based on demos, that was intended to change people’s attitudes about a brand. We measured our effectiveness via surveys like copy testing and brand trackers with attribute ratings. All attitudes, all mind marketing. We HOPED that affecting the mind would result in increased sales behavior but there was little direct connection unless you were in the direct marketing business. In a digital, social, and mobile culture, people can do things with media and marketers should want these behaviors to occur as much as possible so the commercial doesn’t pass by like dust in the wind. They amplify the effectiveness of your paid media. Behaviors include sharing links, liking or following a brand, commenting in Twitter or in a forum, taking a picture in Pinterest, searching to find out more and visiting brand.com websites. Add to the list downloading branded apps, Shazamming a TV commercial, scanning a QR code, and who knows what else a few months from now?”

You obviously can’t affect consumer behavior if you don’t understand what motivates them. That’s where big data analytics play a critical role. Gabby Griffith reports, “Personalization of the ecommerce experience is increasingly seen as the Holy Grail of online shopping and the key to bridging the gap between online and in-store retail.” [“Personalisation of ecommerce,” eSeller, 18 March 2013] Personalized (or targeted) marketing is considered the Holy Grail because it holds the potential of providing a better ROI for marketing spend. The McKinsey analysts explain:

“By spending customer-segment marketing dollars smarter, companies can either boost revenues without increasing their advertising budgets or maintain their conversion rates but at about half of their current advertising spend. They could, for example, optimize their advertising spend by displaying ads only to the right targets across the full range of Web sites they use to advertise. They could also boost their advertising effectiveness by creatively tailoring messages to user characteristics and profiles.”

Despite the already significant trend towards targeted marketing, Rubinson asserts, “The biggest sea change in behavior marketing has yet to occur, so fasten your seat belts, because it is coming. It is the rise of mobile marketing which brings digital marketing right to the point of purchase. It is the convergence of advertising and shopper path to purchase where a marketer will be able to deliver the right message, at exactly the right time and place, to shoppers who that brand has a relationship with but who split their purchases among other brands as well.” Richard Ting agrees with Rubinson that there is a long way to go before companies fully embrace targeted marketing. He writes:

“Aside from a select few companies — like Amazon — most brands still have no unified view of what their customers are saying, doing, or buying on their websites, in retail, and across social media. As a result, instead of better targeting and personalizing brand messages, experiences, and deals, most brands are still embracing the ‘spray and pray’ tactics commonly used during the height of traditional advertising.” [“The Customer Profile: Your Brand’s Secret Weapon,” HBR Blog Network, 11 March 2013]

Caspar Craven agrees with all previously cited analysts and believes that knowing your customer better is “like digging for gold, except that it’s not just one nugget but many” for which you are digging. [“Digging for gold? Strategies to drive better client engagement…” Fourth Source, 11 March 2013] He continues:

“With customer intelligence, new technology and advanced business intelligence tools, it is now possible to have a real grasp on which of your clients are engaging with what type of content, and then monitor the level of this engagement. Indeed, in today’s always-on digital world, customer intelligence strategies and tools are a business imperative. It’s about getting to grips with, and exploiting, the myriad channels, touchpoints and data sources available in order to take account of the broader perspective.”

Since coming to grips with the challenge of getting to know your customers better and using that knowledge to better personalize marketing is an imperative, in the next post, I’ll discuss some of the strategies that analysts cited above (as well as others) recommend for doing just that. As you will learn, the best strategies involve gathering not just a lot of data but the right kinds of data.