Home » Innovation » Open Innovation: The Good, the Bad, and the Ugly

Open Innovation: The Good, the Bad, and the Ugly

Snow believes that the Linux movement, which was seen as a revolt against Microsoft, played a large role in making open innovation acceptable. The Linux movement showed that strangers could work together openly to create an innovative product. One company that has successfully used open innovation to its benefit is General Mills. The company calls its open innovation framework the X3 Process. The “Xs” stand for “eXamine, eXpand, and eXplore.” [“Open Innovation: A Not-So-Secret Recipe,” by Lindsey Coblentz, Associate Editor, Food Manufacturing, Manufacturing.net, 26 June 2012] Coblentz interviewed Michael Antinone, Associate Director of General Mills’ Worldwide Innovation Network. He stated that the X3 Process includes the following steps:

In past posts about innovation, I have stressed that good solutions start with good questions. I like the fact that General Mills stresses the importance of good questions in its X3 Process. Antinone noted that one of the unexpected benefits that has emerged since adopting the X3 Process is that the company has been able to connect better with its current suppliers.

Dr. John Golightly, from BAE Systems, is another proponent of open innovation. “Open Innovation,” he writes, “is about expanding the innovation potential of organisations by opening them up to new ways of working with external partners. Whether this manifests itself as new co-working agreements, acquisition of start-ups with interesting technologies, or spinning out new developments into external companies the ultimate goal is the same: to increase innovation and realise increased value as a result.” [“Realising the Value of Open Innovation,” with Chris Ford, Prateek Sureka and Benjamin Reid, Big Innovation Centre, September 2012] Golightly acknowledges that there is no “one size fits all” approach to open innovation; but, he does believe that there nine building blocks that all open innovation frameworks must possess if they are going to be successful. Those building blocks are: Open Innovation Strategy; Organization; Leadership; Culture; Tools/Processes; Metrics; Ecosystem Interactions; Skills; and Business Models/Intellectual Property. He displays the building blocks in the following graphic but notes that “the configuration of the building blocks is different” for each organization. 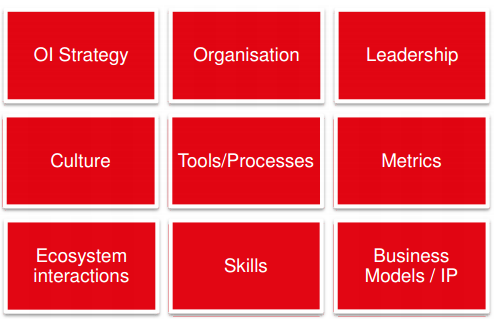 Letizia Mortara, Johann Jakob Napp, Imke Slacik and Tim Minshall, authored another report about open innovation and how best to implement it. Their report touches on some of the same topics as Golightly. [“How to implement open innovation: Lessons from studying large multinational companies,” Centre for Technology Management, Institute for Manufacturing, 2009] They write:

“Our analysis of enablers and obstacles for OI reveals four main issues that companies have to tackle: culture, procedures, skills, and motivation.

It should come as no surprise that culture tops the list of attributes that companies need possess in order to be successful when trying to adopt an open innovation framework. The wrong culture is an innovation killer. I also like the fact that the researchers highlight the importance of cross-functional teams. The primary purpose of open innovation is to draw upon the best minds to solve challenges or to create new products and services. Individuals from different disciplines bring with them different perspectives that are always useful in such endeavors.

Both papers go into much greater detail about how to implement open innovation and both provide a number of case studies to make their case. If you are interested in open innovation, I highly recommend that you click on the links provided and read the studies in their entirety. I also recommend that you read another academic paper written by Paul Trott and Dap Hartmann, professors at the Delft University of Technology. They are not quite as keen on open innovation as the researchers cited above. “The concept of ‘open innovation’ has received a considerable amount of coverage within the academic literature and beyond,” they write. “Much of this seems to have been without much critical analysis of the evidence.” [“Why ‘Open Innovation’ is Old Wine in New Bottles ,” International Journal of Innovation Management, Vol. 13, No. 4, December 2009] They believe that when Henry Chesbrough introduced the subject of open innovation he created “a false dichotomy by arguing that open innovation is the only alternative to a closed innovation model.”

Trott and Hartmann examine each of those principles in turn and explain why they believe them to be historically false representations. By using historical examples, they claim to have proved “that the dichotomy between closed innovation and open innovation may be true in theory, but does not really exist in industry.” Their biggest criticism of open innovation, however, is that they believe it rests on an outdated notion of linearity. They explain:

“Despite its success — as measured by the amount of attention it has received in the R&D literature, … the commercial success of Chesbrough’s books, and the willingness of big companies to embrace, implement and preach its principles — Open Innovation is not perfect. The most obvious shortcoming is that the model is inherently linear, and basically a variation on the well-known stage-gate model … without any feedback or feed-forward mechanisms. The only distinguishing difference is that in the Open Innovation model, ideas (technologies, knowledge) can freely ‘ﬂy in’ and ‘ﬂy out’ of the funnel that runs from opportunity scanning to business incubation. This is visualized by a funnel that contains holes which enable the exchange of ideas along the way. However, the ﬂow of the innovation trajectory is linearly forward. New innovation models, such as the Cyclic Innovation Model (CIM) … emphasize the importance of feed-forward and feedback mechanisms, as well as the notion that innovation is inherently a cyclic process where new innovations build upon previous innovations. Moreover, according to CIM, innovation can start anywhere within the cycle. There is no ﬁxed point of origin like those demarcating the beginning of the outdated (but still widely used) ‘technology-push’ and ‘market-pull’ models. If anything, modern innovation models should once and for all get rid of the notion of linearity in the innovation process. Hence, it will be a signiﬁcant improvement when the cyclic concepts of CIM are combined with and integrated into the Open Innovation model to overcome its implicit linearity.”

Academic arguments will continue to rage over the value of theoretical models. It’s simply the nature of the academic world. Trott and Hartmann may be correct that open innovation is simply old wine in new bottles, but it is a very big tent that covers a lot of different innovation models including CIM. Viewed from the big tent perspective they also appear to have set up a straw man that was easy to attack. If the term “open innovation” gets organizations to recognize that valuable ideas can be found outside their boundaries, it will have served a valuable purpose.