North Korea’s recent backsliding in the nuclear arena, Pakistan’s troubles with the Taliban, and Iran’s stunning election results have once again brought nuclear issues to the forefront. Last year, a Congressionally-charted commission concluded that “the development of nuclear arsenals by both Iran and North Korea could lead to ‘a cascade of proliferation,’ making it more probable that terrorists could get their hands on an atomic weapon” [“Panel Cites ‘Tipping Point’ On Nuclear Proliferation,” by Walter Pincus, Washington Post, 16 December 2008].

“In the interim report, the commission called for a global nonproliferation strategy as the best way to keep nuclear materials out of terrorists’ hands. Such a U.S. effort ‘would require intense cooperation with other nations, especially other nuclear powers’ and with the International Atomic Energy Agency, the panel added. It called for strong U.S. financial, technical and political support to the IAEA. … At the same time, the commission called for the United States to begin discussing with allies how to strengthen the Non-Proliferation Treaty. That pact, the commission said, provides a legal framework but lacks the tools to make it work. ‘Its effectiveness has been undermined by errors in how it has been interpreted and by failures of enforcement by the U.N. Security Council,’ the panel said.”

All sorts of debates rage about nuclear policy. Some individuals want to see the world freed from nuclear weapons and others want to see nuclear arsenals updated and strengthened. The Commission appeared ambivalent on this point.

“The commission said, its final report will ‘define the most efficient and effective way to maintain a credible, safe, secure and reliable deterrent for the long term.’ Eliminating nuclear stockpiles should remain a national goal, the panel said, although it conceded that nuclear weapons may be needed into ‘the indefinite future,’ albeit at a size ‘appropriate to existing threats.’ The commission added: ‘The U.S. deterrent must be both visible and credible, not only to our possible adversaries, but to our allies as well.'”

Nuclear arms control talks — once thought to be a relic of the cold war — have once again begun between the United States and Russia [“Report Urges Updating of Nuclear Weapons Policy,” by Walter Pincus, Washington Post, 14 April 2009]. A study by two arms-control advocacy groups, the Federation of American Scientists and Natural Resources Defense Council, concludes that the time is right to draft new nuclear policies.

“The study’s main purpose is to propose a new nuclear doctrine for the United States, one it defines as ‘minimal deterrence.’ Under that doctrine, the nation would retain enough nuclear weaponry ‘to deter nuclear use in the first place.’ The study creates a new category called ‘infrastructure targeting,’ under which attacks would focus on ‘electrical, oil and energy nodes’ that support war industries. ‘A minimal nuclear deterrence policy with infrastructure targeting does not require nuclear forces to be on alert or even to react quickly,’ according to the study. The authors propose keeping weapons in the current stockpile but lowering their yields — to a degree. The weapons, the report said, should remain devastating enough to deter any nation from striking the United States or any of its allies.”

Talk about “infrastructure targeting” concerns a lot of countries — many that have a reason to be concerned [“Developing Nations Seek Assurances on Nuclear Arms,” by Colum Lynch, Washington Times, 16 May 2009].

“Cuba, Iran and other developing nations [have] demanded that the five original nuclear powers accept legally binding commitments to dismantle their nuclear arsenals and provide assurances they will not use such weapons against states that do not possess atomic weapons.”

So-called rogue nations understand that they have been in the cross-hairs of other countries for some time. Leaders of countries like North Korea and Iran often pride themselves in taking a road apart from the rest of the world when it comes to nuclear proliferation — on the other hand they have no desire to see nuclear weapons used against them. Other developing nations are also concerned that events in their country (such as the unwelcomed arrival of terrorists establishing training camps) could result in their infrastructure being targeted. As I have often noted, one of the things that keeps many developing nations from progressing is a lack of infrastructure. It should surprise no one that such countries are concerned that even their inadequate infrastructure could be targets for nuclear weapons. Original members of the so-called nuclear club insist that their nuclear arsenals will never be used that way; but, without binding assurances, potential target nations remain skeptical.

As a result of these differences of view, the recommended strengthening of the Nuclear Proliferation Treaty is unlikely to occur. There had been rising hopes that a strengthened treaty could be worked out. The 189 current signatories reached agreement on a procedural agenda for a major review conference on the treaty in New York next May, but the conditions insisted upon by countries like Cuba and Iran faced stiff opposition from France, who “said it would not yield to any legally binding commitments to undertake further reductions in its nuclear arsenal or to allow international inspections of its nuclear stockpile.” One sign that nations are paying more attention to nuclear proliferation is that North Korea’s latest nuclear weapons test “triggered a swifter, stronger and more uniform wave of international condemnation, most notably from the isolated nation’s historical allies, China and Russia.”

More recently, the United Nations Conference on Disarmament, after a decade of deadlock, “approved a working group to negotiate a treaty banning the production of fissionable material for nuclear weapons” [“U.N. Hopes to Ban New Fissionable Material, Space-Based Weapons,” by Walter Pincus, Washington Post, 2 June 2009]. Despite the breakthrough, Pincus cautions that we shouldn’t “expect quick action.”

“The last international pact this 65-nation group successfully negotiated was the 1996 Comprehensive Test Ban Treaty, which has yet to come into force, partly because the U.S. Senate has not voted for its ratification. It was in 1993 that the U.N. General Assembly first passed a resolution calling for negotiations on a fissile-material treaty. Then two years elapsed before the underlying mandate for an ‘effectively verifiable’ one was approved by the conference. President Obama has made a fissile-material treaty part of his arms-control agenda. But there are signs a fissile pact faces problems, in part because the conference approves only by consensus, meaning everyone must agree.”

All of these articles point to one truth: nuclear weapons proliferation and similar threats are likely to be around for some time. That brings me to the article that really caught my eye because it touches on port and harbor security — one of the areas in which Enterra Solutions works. I found the article particularly intriguing because it was written by a professor of management science at the Stanford Graduate School of Business rather than a typical national security expert [“A Threat in Every Port,” by Lawrence M. Wein, New York Times, 14 June 2009]. Wein writes:

“While President Obama’s future vision of ‘a world with no nuclear weapons’ is certainly laudable, for the present America still needs to do everything it can to prevent a terrorist from detonating such a bomb on our soil. The Domestic Nuclear Detection Office, part of the Department of Homeland Security, is in charge of developing a worldwide nuclear-detection system that, primarily, would use technology to monitor vehicles and shipping containers along the various transportation networks by which nuclear weapons could be smuggled into America. Yet the Government Accountability Office found last year that the detection office ‘lacks an overarching strategic plan,’ despite the $2.8 billion a year spent on the initiative.”

In drafting a strategy, Wein suggests that the DHS “view the problem strategically … through game theory.”

“In this case, the government plays first and uses its budget to place detection resources — technology, security experts and the like — at the various ‘nodes’ along the transportation network, like seaports, airports and border stations. The terrorists, in turn, can be expected to choose the path that gives them the best chance to carry out an attack. As the accompanying chart illustrates, there are a dizzying number of paths that terrorists could use to transport a foreign-built weapon to an American target city — 132 variations, in fact, taking into consideration all four likely modes of transport: commercial airplane, cargo airplane, container ship and cruise ship. So, how do we decide which route the terrorists are most likely to choose and which path we the are most vulnerable to? Game theory implies that we should maintain an equal chance of detecting fissile material along each of the 132 paths because if we harden one path too much, the terrorists will simply choose an easier one. On top of it all, the agency needs to consider cost-effectiveness: if certain sets of nodes along the transportation network are much more cost-effective to reinforce than others, then the best defense may not come from allocating resources equitably across the system.” 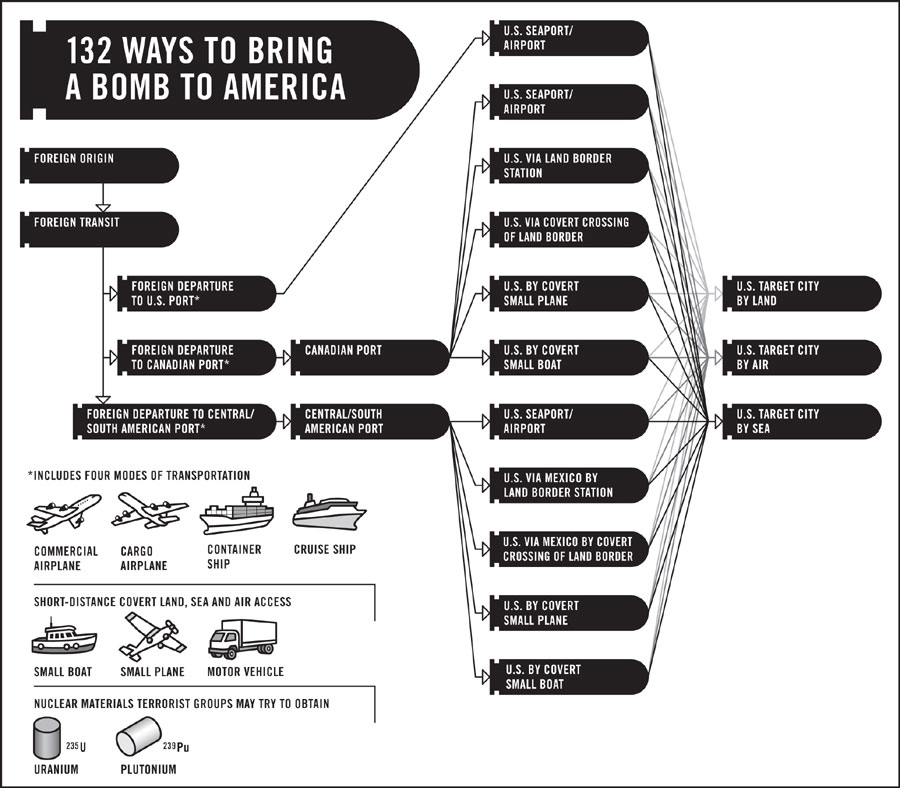 Wein points out that since “transferring [a nuclear bomb] to a foreign airport or seaport are the two steps that are on all 132 paths” they “represent excellent choke points.” I agree with Wein’s basic point. When we talk with port operation authorities, we talk about security in terms of creating a trusted supply chain. This is particularly important for developing countries, which are considered likely transit points for such a bomb. If a country can become part of the solution rather than remain part of the problem, then its opportunities for development increase. Wein goes into some detail about how to address each path noted on the above diagram, but I want to concentrate on the maritime path. Wein writes:

“The Coast Guard is undertaking a three-year pilot project aimed at securing maritime routes, but faces daunting challenges in both identifying suspect vessels and detecting fissile material amid the background radiation present at sea. This pathway will perhaps be the weakest link in our border defense for the next several years, and should be one of the highest priorities of the Domestic Nuclear Detection Office.”

That is one reason that sea services are extremely interested in creating a Maritime Domain Awareness system that provides persistent ocean surveillance that can help make the identification and tracking of suspect vessels easier. For more on this subject, see my post Persistent Ocean Surveillance. Wein is concerned about this subject because he understands that screening systems, inappropriately implemented, could negatively affect the flow of commerce around the world. Since the threats would come primarily from developing countries, this could have particular impact on countries desperately trying to connect to the global economy.