Multi-Channel Commerce: The Rise of E-Commerce

Gopi Krishnan, head of Infosys’ Supply Chain Management practice within Enterprise Solutions, writes that his clients see an “increasing need to get onto the Multi-Channel Commerce (MCC) bandwagon.” [“Multi-Channel Commerce: Not viral yet, but definitely diffusing,” Supply Chain Management, 8 September 2011] He reports that retailers believe that revenues will decline significantly if they do nothing. Consumers, he notes, are getting more used to having “a combination of channels (web, mobile, call center, store, EDI, pick-up & drop points, etc.) to browse, buy and return merchandise.” This adds enormous complexity to order fulfillment processes and to the supply chains that support sales. “At the back-end of the supply chain,” Krishnan writes, “shopping cart items need to be split and re-aggregated based on stocked/non-stocked items available across central/regional/store warehouses following different delivery models across different suppliers with different lead times.”

“MCC is a concept [that] is now slowly seeping into (as against sweeping across) continental Europe, LatAm and large parts of Asia Pacific – regions which has so far kept the various channels separate and largely used websites to peddle information about goods rather than peddle the goods themselves.”

The second way that multi-channel commerce is spreading is by industry. Krishnan explains:

“Consumer electronics companies, like Apple, Motorola and Nokia, are not into classic B2B transactions alone anymore. They need to know what their customers are buying and why and are actively looking at engaging in ongoing conversations with them. Just a few years back, selling would have meant trusting the electronics retailers demand forecasts – bullwhipped or otherwise – and shipping products to mandated locations in mandated quantities on mandated days. Ditto with related industries like consumer packaged goods, medical instruments and certain sectors within industrial goods.”

Increasingly manufacturers are exploring ways to sell their products directly to consumers. The reason is obvious — profit margins on direct sale items are higher. A third way that Krishnan believes multi-channel commerce is spreading is by retailer. He writes:

“Tier-2 US Retailers – … the $1-5bn retailers … – [are] finally opening up to the possibility of cross-channel sales and fulfillment, of using one channel to leverage sales in the other.”

Consumers who use multiple channels to make their purchases are used to a certain level of service and competence. Krishnan believes that this puts a lot of pressure on Tier-2 retailers to get MCC right from outset. It is not just point of sale that must be competently executed, everything from “web commerce to call center to order management to warehouse management to returns management to financials,” must all be executed at a level expected by consumers. The fourth way that Krishnan believes multi-channel commerce is spreading is virtually. That is, Tier-1 retailers that already have multiple channels of commerce are extending their e-commerce channels to more countries. He writes:

“Tier-1 retailers are now all going international. This … bring[s] in newer angles of multiple time zones, currencies and localizations (not just in item categories, but in processes too). But where IT landscape is still nascent and evolving, fitting in a pre-built template would be a lot easier that a classic rip & replace strategy.”

“Large MCC programs … are a lot more than a web-front end and a DOM [Document Object Model] back-end, [they require] order orchestration across applications in the buy-side and sell-side with a solid MDM [Master Data Management] framework to ensure data stays current and clean.”

The folks at SupplyChainBrain also believe that “e-commerce and multichannel retailing are placing greater demands on order fulfillment practitioners.” At least, that’s the conclusion of “a new study released by Saddle Creek Corp.” [“Study Explores Challenges and Trends in E-Fulfillment,” 15 November 2011] The article continues:

“The E-Fulfillment Trends Report examines how companies today are addressing the challenge of providing efficient, cost-effective, service-driven fulfillment operations. The report is based on online survey responses from 160 retailers, distributors and manufacturers involved in e-fulfillment functions. It explores best practices, common challenges, and emerging trends in e-fulfillment nationwide.”

Too many people outside of the supply chain profession have the mistaken impression that e-commerce is a simple matter of establishing a web site and selling products (like putting up your old set of golf clubs on eBay). Both Krishnan and the analysts from Saddle Creek clearly understand that “simple” is not a word that should ever be associated with eCommerce. That is why the Saddle Creek study involved retailers, distributors and manufacturers. The SupplyChainBrain article provides some the research highlights. They include:

• The rise of e-commerce has elevated order fulfillment operations to a critical business function. The practice now requires sophisticated processes, state-of-the-art resources, and an in-depth understanding of multiple sales channels.

• There is a distinct trend toward multichannel retailing (i.e., in store, catalog and online) as the majority of respondents (56.87 percent) use more than one sales channel.

• The demand to deliver perfect orders and a consistent brand experience from channel to channel can be challenging for many companies. Processing time for outbound orders (35 percent), system integration (29.4 percent), and upholding service standards (29.4 percent) are particularly weighty responsibilities, according to respondents.

• To accommodate the increasing sophistication of fulfillment practices, 39.4 percent of respondents outsource some or all of their e-fulfillment operations. The most widely mentioned advantages were ‘alternative to investment in overhead/infrastructure’ and ‘opportunities for cost savings.’

Jeff Jones, vice president, sales and marketing, for ProLog Logistics, a wholly-owned subsidiary of Saddle Creek Corp, told the staff at SupplyChainBrain, “The data points to the growing complexity of the order fulfillment process. Today, e-fulfillment has evolved to a level of sophistication that requires carefully planned processes, scalable operations, state-of-the-art systems, efficient transportation and superior customer service. Given these demands, it’s not surprising that many companies are turning to outsourcing to manage some or all of their fulfillment function.” It’s also not surprising that many companies are looking to hire senior executives whose primary responsibility is e-commerce. Dana Mattioli rhetorically asks, “What’s the hottest thing on retailers’ Christmas lists this year?” Her answer: “Heads of e-commerce.” [“Wanted: Chief, E-Commerce,” Wall Street Journal, 15 November 2011]  She continues:

“Recruiters say they’re spending a lot of their time turning up executives who can build and manage websites, handle increasingly complex inventory management, and unsnarl the logistical problems that come with developing a new sales channel. The moves are being spurred by the fast growth of online sales and a realization by some big brick-and-mortar chains that they’re still behind the curve. “

That news complements what Krishnan’s customers have been telling him. Mattioli provides a short list of some of the companies looking for e-commerce executives. She writes:

“Target Corp. is looking for a new president of Target.com after a disastrous website crash in September led the last person in the job to resign. In hopes of catching up with competitors, department-store chain Kohl’s Corp. is bringing in a new senior vice president, a person familiar with the matter says. … Wal-Mart Stores Inc. has said it will announce a new CEO of global e-commerce in January, succeeding Eduardo Castro-Wright, who will retire in July. Smaller companies are looking, too. Jeweler David Yurman has just hired Beth Sash, a former e-commerce vice president at Polo Ralph Lauren, to run its online operations, a person familiar with the matter says.”

Mattioli reports that not only are e-commerce executives making significantly more money than they were a decade ago, some have even “joined the C-suite.” She continues:

“The scramble has been spurred by the strong performance of online sales, which are growing quickly even as brick-and-mortar growth remains sluggish. Between 2004 and 2010, U.S. retail e-commerce spending grew from $66 billion to $142 billion, according to comScore Inc. This year, the total is expected to jump to $162 billion. Deloitte estimates that one-third of U.S. shoppers’ holiday purchases will be ordered online this year. Meanwhile, pressure is building from online retailers like e-commerce giant Amazon.com, which continues to invest heavily in growth and has just rolled out a new tablet computer — the Kindle Fire — that will give it a new route to consumers.”

A graphic associated with Mattioli’s article tells the tale of why retailers feel compelled to jump into e-commerce. 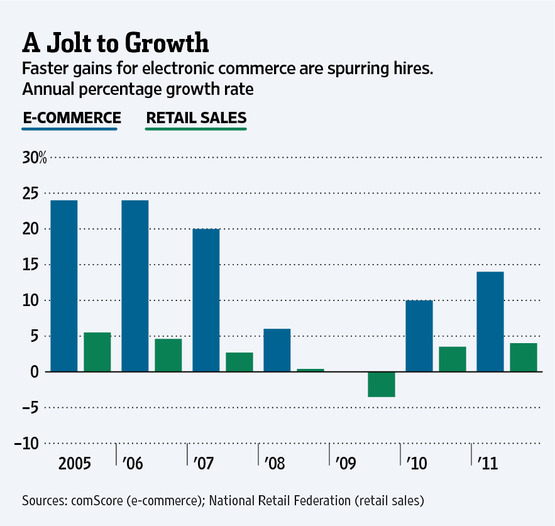 Mattioli notes that the embarrassing crash of Target.com’s site in September 2011 underscores the reason that retailers want to ensure they have a top-notch team running e-commerce operations. She notes, “Just weeks before the crash, Target had ended its relationship with Amazon, which had been managing the discounter’s online presence and order fulfillment.” She continues:

“When brick-and-mortar retailers took their first steps online, they typically gave e-commerce responsibilities to the executives who ran their catalog businesses, says Hal Reiter, chief executive of headhunter Herbert Mines Associates. But now that online retail has become a unit unto itself with its own profit and loss responsibility, retailers have had to upgrade the talent.”

For many retailers, like Coach Inc., e-commerce represents their “single largest store in the world.” Since such “stores” don’t have geographical limits, that’s not surprising. Nor is it surprising that the complexity involved with e-commerce “is forcing companies to boost spending for both talent and infrastructure.” Mattioli continues:

Mattioli reports that because e-commerce is still “relatively new, companies are wrestling with who makes the best candidates.” She claims that “technology veterans are appealing” and one recruiter told her that “the dream person comes from Google.” However, the recruiter indicated that such talent acquisitions may run into culture clash because of “the slower decision-making of old-line chains.” The bottom line is that multi-channel commerce is here to stay and the companies that master it are going to thrive in the years ahead.