Home » Artificial Intelligence » The "Last Mile" Challenge and the Future of Logistics: Part 2 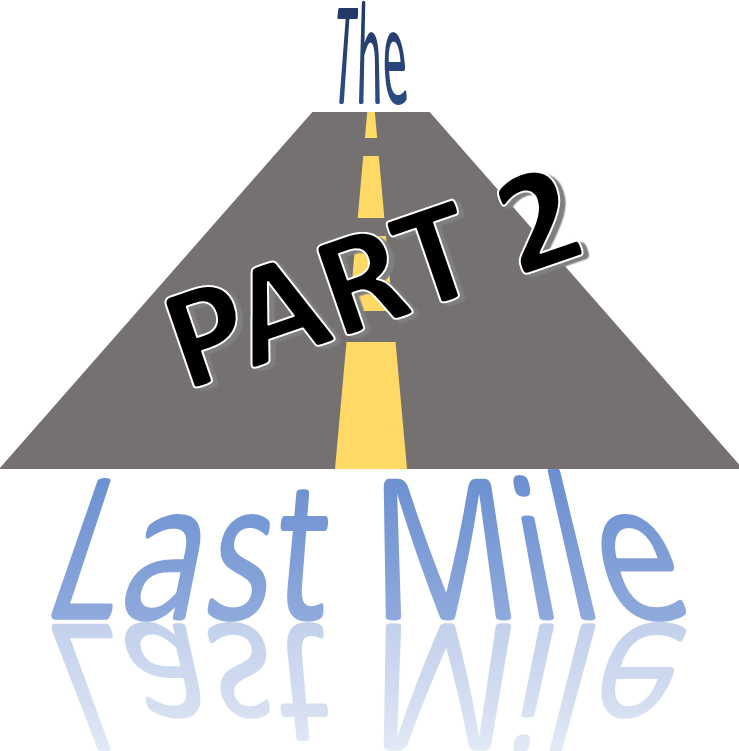 The "Last Mile" Challenge and the Future of Logistics: Part 2

“The last mile is extremely inefficient,” writes Edwin Lopez (@EdwinLopezT37). “It is the final frontier of logistics, a cost so habitual yet burdensome to supply chains that it begs for futuristic ideas, e.g. drones, flying warehouses or self-driving cars, to capture our imaginations.”[1] In Part 1 of this article, I discussed some of the last mile challenges logistics professionals encounter. The challenges range from delivering packages to remote areas to delivering packages in crowded cities. Angus Loten (@angusloten) notes, “Speeding up the so-called last mile, from a local distribution center to a retailer or a customer’s home, has remained a challenge, especially in crowded urban centers.”[2] That means, as the world becomes more urbanized, the last mile challenge could get worse unless some of the technologies mentioned by Lopez come to fruition.

Technology and the Last Mile Challenge

In the first part of this article, I discussed how technologies like the Internet of Things (IoT) and cognitive computing can help improve supply chain visibility and, as a result, speed up last mile delivery. Matthias Winkenbach (@mwinkenb), Director of the Massachusetts Institute of Technology’s Megacity Logistics Lab, asserts, “Big-data analytics and the Internet of Things can be a powerful resource.” Unfortunately, he told Loten, “More and more companies are sitting on tons of data, but they don’t know what to do with it, or how to understand it.”[3] If logistics’ last mile challenge is going to be met, the solution will likely involve the IoT, the data it generates, and cognitive computing to make sense of that data. Fortunately, there are a lot of people working on the challenge. Below are some of the creative ideas being explored.

There has been a lot written and discussed about the coming age of autonomous vehicles. The first step in that direction is connecting vehicles to one another. KPMG analysts, Tom Mayor and Talley Lambert, report, “According to KPMG’s 2017 Global Automotive Executive Study, which polled nearly 1,000 executives with the world’s leading automotive companies, 76% say just one connected vehicle generates more revenue streams than 10 conventional vehicles.”[4] They add, “At the center of this revolution are emerging deep learning and artificial intelligence (AI) tools; sensor technologies that let trucks, vans or material handling equipment ‘see’; on-board supercomputers that allow them to become autonomous; near-ubiquitous over-the-air connectivity; and a set of new business models that unlock value from all of that technology.” They go on to note that these same technologies are already being applied to the last mile logistics challenge and have the potential to disrupt the entire supply chain. They explain:

“Deployed together, these emerging technologies offer potentially powerful alternatives to the integrated parcel delivery business models that today predominate. It is not just USPS, FedEx and UPS that need to beware, however — ‘same-day delivery’ is a game-changer for retail. With more products able to be reliably ordered for delivery ‘this afternoon,’ brick-and-mortar retail traffic and volumes will suffer. As ‘same-day assortment’ and selection improves, those e-retailers without the scale and volumes to deeply understand customer demand and forward deploy local inventories into major metro markets will be at a disadvantage in product categories and customer segments where immediacy of fulfillment dominates product feature or assortment.”

A number of different schemes for using autonomous vehicles will likely emerge in the coming years. Google has already secured a patent for a driverless delivery vehicle. Mike Murphy (@mcwm) reports, “The search giant is looking into developing self-driving delivery trucks, just as Amazon readies its autonomous delivery drone fleet. Google’s patent outlines what it calls an ‘autonomous delivery platform’ for delivery trucks. The trucks would be fitted with a series of lockers that could potentially be unlocked with a PIN code sent to the person waiting for the delivery before the truck arrives at their location. The patent also suggests the locker could be unlocked by a customer’s credit card, or an NFC reader. After the package is dropped off, the truck will continue on to its next delivery point, or return to the depot to pick up more packages.”[5]

Although large driverless vehicles will likely play a logistics role in the future, drones and small autonomous robots are already at work. April Glaser (@aprilaser) reports it’s not just big players, like Amazon (Prime Air) and Google (Project Wing), who are experimenting with drones. A 7-Eleven store in Reno, NV, has already started delivering orders to select customers who live within a mile of the shop.[6] UPS is also testing a drone delivery system developed by Workhorse Group. The “HorseFly UAV, can carry packages weighing up to 10 pounds and fly autonomously for 30 minutes. The drone recharges while docking on the roof of an electric delivery vehicle. While it’s docked, UPS drivers can load packages into the drone and then confirm its flight path through the truck’s dashboard.”[7] Mercedes-Benz is developing a similar system using drones likened to “Robotic Carrier Pigeons.” Elisabeth Behrmann (@ElisBehrmann) reports, “Mercedes-Benz is looking at mounting automated flying drones onto a new line of electric vans as part of a 500 million-euro (US$562 million) investment aimed at speeding delivery times for online orders. The small pilotless aircraft would be part of a suite of on-board systems, including digital sorting equipment, that could cut both costs and delivery times in half for the final portion of a package’s journey.”[8] Although regulations for using drones for logistics purposes are still in the works, it seems inevitable they will play a significant role in some areas. You can watch an MHI video about the future of drones and autonomous vehicles by following this link.

Autonomous, ground-based drones may also play a role. Leading the way is Starship Technologies, which already is testing or has plans to test its delivery robots in a dozen countries including Britain, Germany, Switzerland, and the United States.[9] The following promotional video shows you what the Starship robot looks like.

Starship’s designers are not the only players in the field. Kobi Shikar, an industrial design student at Israel’s Shenkar College has unveiled his personal vision for a delivery robot.[11] “His Transwheel robot concept, created as part of his final college project, looks like a robotic unicycle. It is in fact an autonomous robotic wheel with a self- balancing system and electric arms to carry the load.” The following video demonstrates how the system would work.

One question I’ve seen raised about autonomous delivery robots is how susceptible they might be to interference by thieves while on their delivery mission. How viable they will be remains to be seen. Other technologies, like advances in warehousing will also play a role in solving the last mile challenge.

Mayor and Lambert conclude, “Consumers are increasingly responding to these new models. In fact, the rapid development and adoption of these technologies fuels and is fueled in part by the similarly rapid evolution of customer purchasing behaviors, including the demand for ever-faster fulfillment, the increasing expectation of free or very-low-cost delivery, the willingness — even eagerness — to purchase online (including once ‘off-limits’ items like fresh fruits and vegetables), and the acceptance of novel delivery mechanisms.” The last mile will probably always remain a challenge, but novel approaches are making the last mile a very interesting mile indeed.