“Would it surprise you to learn,” writes Mel Eatherington, “that a third of all workers fall short of employers’ expectations in written communication skills? That’s exactly what the College Board discovered when it surveyed 120 corporations in the Business Roundtable.” [“Employees Lack Writing Skills in the Workplace,” Western Carolina University] Eatherington continues:

“The companies who responded employ a staggering four million workers, meaning that approximately 1.33 million employees within these businesses have unsatisfactory writing skills. How can so many people lack these essentials, and is writing really that important?”

Eatherington reports that “half of all companies take writing ability into consideration when hiring”; so they must believe writing clearly and effectively is important. Apparently, however, the message hasn’t reached potential employees. Eatherington continues:

“Who writes, and what do they write during their daily tasks? According to the survey, writing is a regular part of the job for two-thirds of all employees. Emails, reports, and presentations are just a few types of writing one might be expected to do in a professional setting, regardless of occupation.”

Sue Shellenbarger claims that poor writing skills are often reflected in poor speech habits as well. As a result, companies are often embarrassed by the apparent lack of professionalism displayed by their employees. [“This Embarrasses You and I*,” Wall Street Journal, 19 June 2012] Shellenbarger asserts that some bad habits are actually reinforced by “the informality of email, texting and Twitter where slang and shortcuts are common.” She notes, “Such looseness with language can create bad impressions with clients, ruin marketing materials and cause communications errors, many managers say.” Eatherington agrees with Shellenbarger and reports that “employees who cannot write well cost their companies big bucks each year.” He cites one source that “estimates that remedying deficiencies in writing costs American corporations as much as $3.1 billion annually.” Unfortunately, Shellenbarger claims, “There’s no easy fix.” She explains:

“Some bosses and co-workers step in to correct mistakes, while others consult business-grammar guides for help. In a survey conducted earlier this year, about 45% of 430 employers said they were increasing employee-training programs to improve employees’ grammar and other skills, according to the Society for Human Resource Management and AARP.”

Eatherington notes that “sending a single worker for remedial training in writing can cost more than $3000.” He goes on to write, “These workers, it is safe to assume, have little future with the companies they work for if their writing skills are not brought up to professional standards.” Bryan A. Garner, author of Garner’s Modern American Usage and president of LawProse, a Dallas training and consulting firm, told Shellenbarger, “I’m shocked at the rampant illiteracy [on Twitter].” Shellenbarger reports that Garner “has compiled a list of 30 examples of “uneducated English,” such as saying “I could care less,” instead of “I couldn’t care less,” or, “He expected Helen and I to help him,” instead of “Helen and me.”

Max Mallet, Brett Nelson, and Chris Steiner indicate that “useless business jargon” is just as irritating as poor English. They claim “this annoying gobbledygook has mesmerized the rank and file around the globe.” [“The Most Annoying, Pretentious And Useless Business Jargon,” Forbes, 26 January 2012] Jennifer Chatman, management professor at the University of California-Berkeley’s Haas School of Business, told Mallet and his co-authors, “Jargon masks real meaning. People use it as a substitute for thinking hard and clearly about their goals and the direction that they want to give others.” Mallet, Nelson, and Steiner took it upon themselves to assemble “a cache of expressions to assiduously avoid,” if you are going “to save you from yourself (and … keep your colleagues and customers from strangling you).” Their list of phrases to avoid can be found by clicking this link. Two examples of jargon they deem worthy of reproach are:

“Core Competency — This awful expression refers to a firm’s or a person’s fundamental strength—even though that’s not what the word ‘competent’ means. ‘This bothers me because it is just a silly phrase when you think about it,’ says Bruce Barry, professor of management at Vanderbilt’s Owen Graduate School of Business. ‘Do people talk about peripheral competency? Being competent is not the standard we’re seeking. It’s like core mediocrity.’

“Buy-In — “This means agreement on a course of action, if the most disingenuous kind. Notes David Logan, professor of management and organization at the University of Southern California’s Marshall School of Business: ‘Asking for someone’s “buy-in” says, “I have an idea. I didn’t involve you because I didn’t value you enough to discuss it with you. I want you to embrace it as if you were in on it from the beginning, because that would make me feel really good.”‘”

I once heard sports announcer Bob Costas rant about one his favorite meaningless phrases — “They control their own destiny”. Either it’s destiny or it’s not. People can control outcomes, but not destinies. That phrase, however, didn’t make the list assembled by Mallet, Nelson, and Steiner. Touching on the sporting theme, they did create “a ‘Jargon Madness’ bracket—similar to the [one used during the] NCAA college basketball tournament—featuring 32 abominable expressions.” 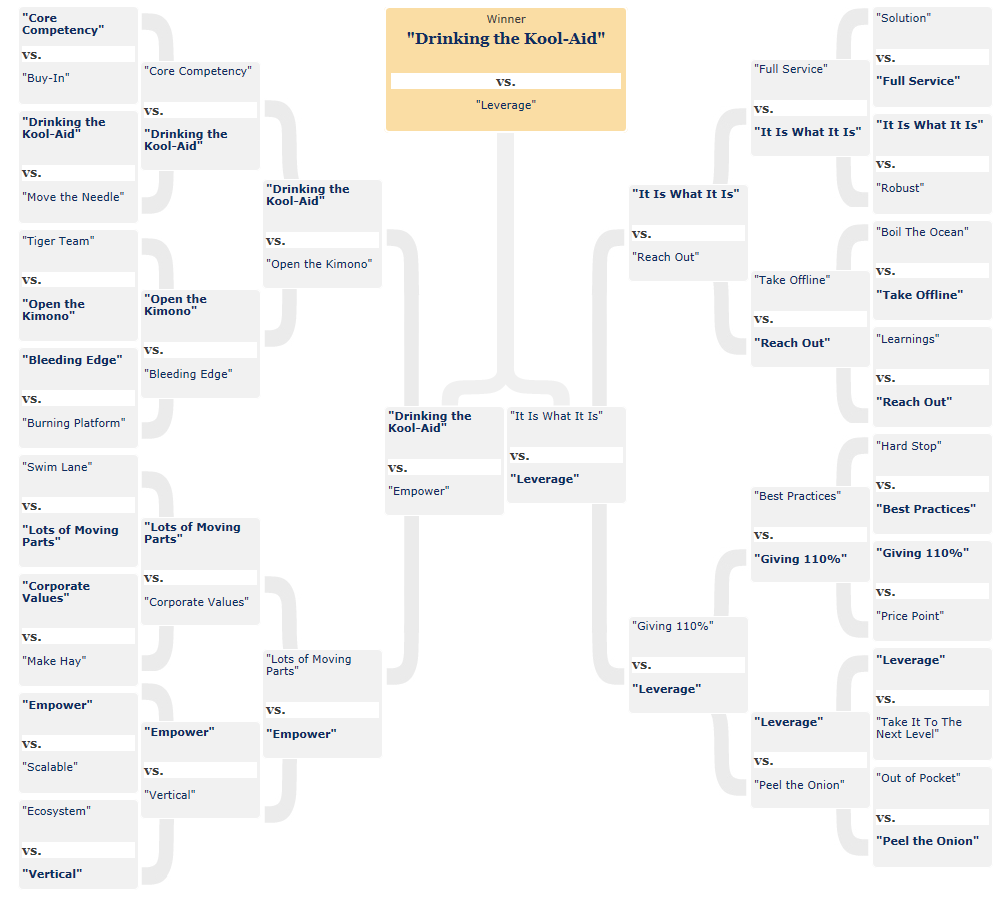 As you can see, the final two were “Drinking the Kool-Aid” and “Leverage.” Mallet, Nelson, and Steiner asked readers to vote on which of those terms they believed should be declared the winner (or loser, depending on your point-of-view). Personally, I vote for “Drinking the Kool-Aid.” Unfortunately, ridding the business world of jargon may decrease the annoyance level but it won’t necessarily improve employee writing skills. Leslie Ferrier told Shellenbarger that “she was aghast at letters employees were sending to customers at a Jersey City, N.J., hair- and skin-product marketer when she joined the firm in 2009. Shellenbarger explains:

“The letters included grammar and style mistakes and were written ‘as if they were speaking to a friend,’ says Ms. Ferrier, a human-resources executive. She had employees use templates to eliminate mistakes and started training programs in business writing.”

When it comes to writing skills, Shellenbarger says there may be a generation issue involved. She explains:

“Most participants in the Society for Human Resource Management-AARP survey blame younger workers for the skills gap. Tamara Erickson, an author and consultant on generational issues, says the problem isn’t a lack of skill among 20- and 30-somethings. Accustomed to texting and social networking, ‘they’ve developed a new norm,’ Ms. Erickson says.”

Shellenbarger admits that some of the problems arise because “some grammar rules aren’t clear.” She says that leaves “plenty of room for disagreement.” She continues:

Personally, I agree with Kamenick that commas that are routinely omitted in today’s writing deserve to be reinserted. Patricia T. O’Conner, author of a humorous guidebook for people who struggle with grammar, told Shellenbarger, “These disagreements can get pretty contentious.” Shellenbarger continues:

“In workplace-training programs run by Jack Appleman, a Monroe, N.Y., corporate writing instructor, ‘people are banging the table,’ yelling or high-fiving each other during grammar contests he stages, he says. ‘People get passionate about grammar,’ says Mr. Appleman, author of a book on business writing. Christopher Telano, chief internal auditor at the New York City Health and Hospitals Corp., has employees circulate their reports to co-workers to review for accuracy and grammar, he says. He coaches auditors to use action verbs such as ‘verify’ and ‘confirm’ and tells them to write below a 12th-grade reading level so it can be easily understood.”

It’s sad to think that we have to “dumb down” our writing in order to be understood. I suspect that the “epidemic of grammar gaffes in the workplace” noted by Shellenbarger isn’t going to ease; rather, it is likely to turn into a pandemic. It will take considerable effort in our educational system — starting at the very beginning levels — to teach students how to write and hold them to higher standards. As students get older and start thinking about careers, they need to understand that having good writing skills will make them more employable. I’ll close with a quote from Ernest Hemingway on the subject of bad writing because he was a master of saying a lot in a few words. In Death in the Afternoon he wrote:

“If a man writes clearly enough anyone can see if he fakes. If he mystifies to avoid a straight statement, which is very different from breaking so-called rules of syntax or grammar to make an effect which can be obtained in no other way, the writer takes a longer time to be known as a fake and other writers who are afflicted by the same necessity will praise him in their own defense. True mysticism should not be confused with incompetence in writing which seeks to mystify where there is no mystery but is really only the necessity to fake to cover lack of knowledge or the inability to state clearly. Mysticism implies a mystery and there are many mysteries; but incompetence is not one of them.”