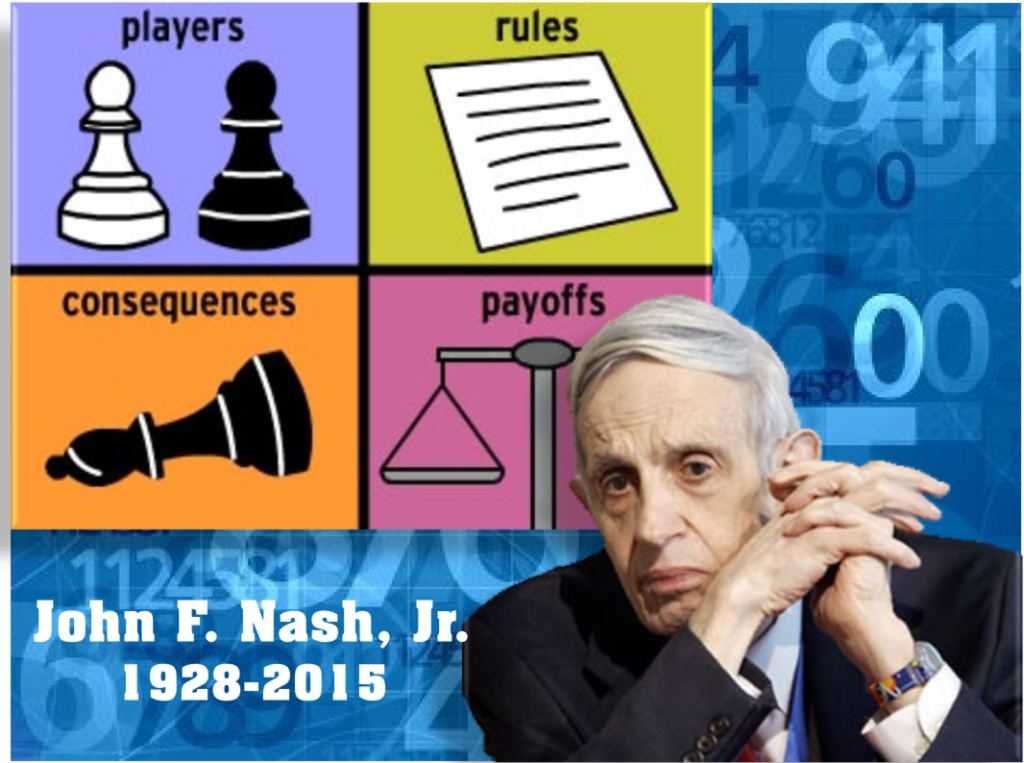 By now most people know that Dr. John Forbes Nash, Jr., and his wife Alicia were tragically killed in an automobile accident on the New Jersey Turnpike last Saturday. Living, as I do, near Princeton University, the loss seems all the more keen. My heartfelt sympathy and condolences go out to their family. I have been told that Dr. Nash was a huge presence on the Princeton campus and he had a significant influence on the entire field of mathematics. As Wikipedia notes, “[Dr. Nash’s] works in game theory, differential geometry, and partial differential equations have provided insight into the factors that govern chance and events inside complex systems in daily life. His theories are used in economics, computing, evolutionary biology, artificial intelligence, accounting, politics and military theory. Serving as a Senior Research Mathematician at Princeton University during the latter part of his life, he shared the 1994 Nobel Memorial Prize in Economic Sciences with game theorists Reinhard Selten and John Harsanyi. In 2015, he was awarded the Abel Prize (along with Louis Nirenberg) for his work on nonlinear partial differential equations.”[1]

Anyone who has seen the movie “A Beautiful Mind” knows Dr. Nash’s life was not an easy one. It was punctuated by a descent into and recovery from mental illness. As Emily Langer writes (@emilylangerWP), “Before the academic world could fully recognize his achievement, Dr. Nash descended into a condition eventually diagnosed as schizophrenia. For the better part of 20 years, his once supremely rational mind was beset by delusions and hallucinations. By the time Dr. Nash emerged from his disturbed state, his ideas had influenced economics, foreign affairs, politics, biology — virtually every sphere of life fueled by competition. But he had been absent from professional life for so long that some scholars assumed he was dead.”[2] Despite his struggles he contributed significantly to each our lives in ways that we might not always understand or appreciate. Following news of Dr. Nash’s death, Christopher Eisgruber, the President of Princeton, stated, “John’s remarkable achievements inspired generations of mathematicians, economists and scientists who were influenced by his brilliant, groundbreaking work in game theory.”[3] As noted above, Dr. Nash’s contributions in the field of mathematics were certainly well recognized. Yet the greatest and most lasting contribution he made was being one of the giants upon whose shoulders new generations of mathematicians will stand and advance. Dr. John Moriarty, a mathematics professor at the University of Manchester, is one such scholar. His tribute to Dr. Nash is undoubtedly being echoed through the mathematics departments of universities around the globe. He wrote:

“Genuinely new, genuinely brilliant ideas in mathematics are hard to come by. Undergraduate maths, for example, contains few topics imagined after 1950. That John Nash made ground-breaking contributions in mathematical areas as diverse as games, geometry and topology, and partial differential equations therefore establishes his place in history. Much more striking, though, is the continuing resonance of his ideas. Just last week, as Nash was in Oslo collecting the prestigious Abel Prize, colleagues of mine began applying his famous concept of equilibrium to help address one of society’s much more contemporary problems — that of supplying electricity cheaply, reliably and cleanly. Great new mathematical ideas have a balance to strike — they must be precise enough to allow detailed conclusions to be drawn, and yet sufficiently loose that they can be useful in a wide range of problems. Nash equilibrium is just such an idea, and was a fundamental contribution to the nascent mathematical theory of non-cooperative games — situations where one player’s fortunes depend on the actions of others, and everybody tries to do as well for themselves as possible. … Nash’s other mathematical contributions should not be underestimated.”[4]

I would like to add my personal tribute to this great man. As President and CEO of a company that uses cognitive computing (which, in our case, involves artificial intelligence and advanced mathematics), I know firsthand how important his contributions were and the lasting impact they will have on the world as artificial intelligence systems become more refined and ubiquitous. At Enterra® we use certain of Dr. Nash’s concepts to create disruptive solutions to complex problems in industry. That he was able to make these contributions while fighting a debilitating mental illness is all the more remarkable. Dr. Nash’s place in history is secure and his contributions will be studied and leveraged by students and companies long into the future.