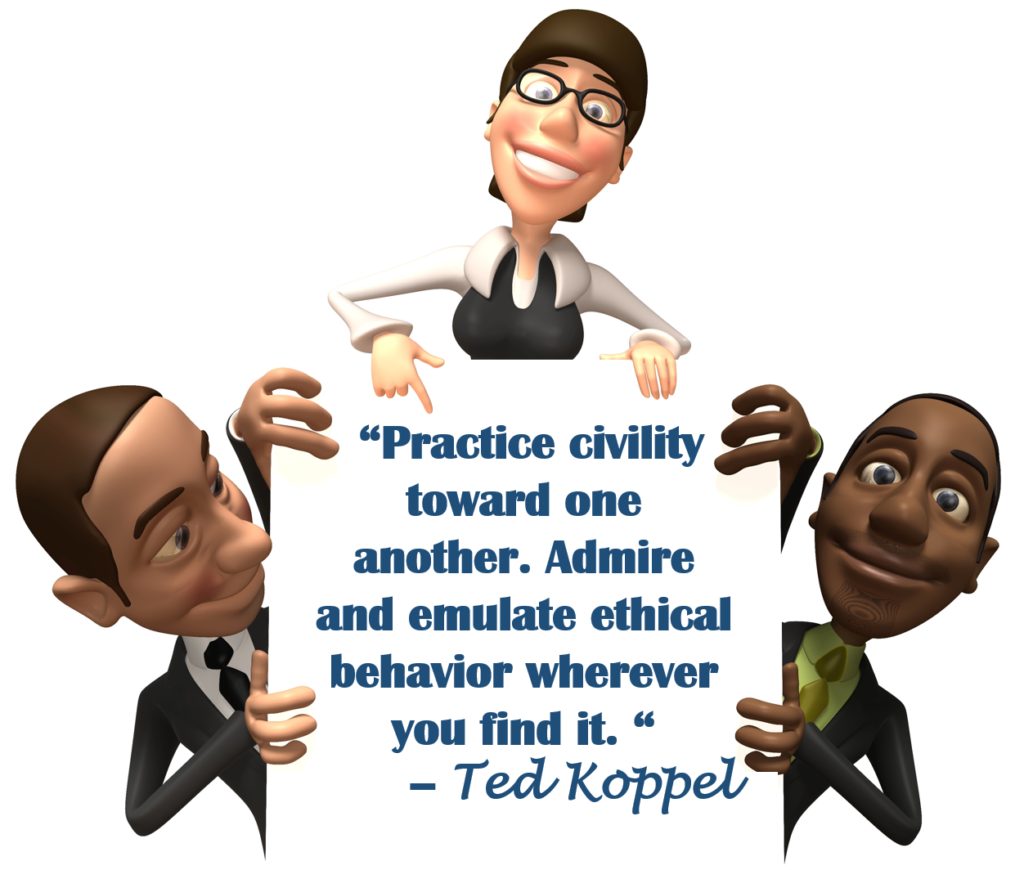 Jobs Sustainability: Being Nice Helps You Keep Your Job

“When once the forms of civility are violated,” Samuel Johnson once wrote, “there remains little hope of return to kindness or decency.” We can only hope he was incorrect in that assertion. America has suffered through a particularly uncivil political season. Arthur C. Brooks, President of the American Enterprise Institute, writes, “From this year’s ghastly presidential race, to the reality entertainment that spawned it, to the open sewer backing up from your Twitter feed, it looks like the worst behavior is being publicly rewarded, doesn’t it?”[1] Brooks adds, “You could be forgiven for believing that maybe the polarities of karma have reversed, and the world now belongs to jerks. Right?” Take heart, Brooks writes, being nice still matters — especially in the workplace. At a time when jobs sustainability is receiving a lot of attention, this is good news.

“Nice people, rejoice,” Brooks writes. “Notwithstanding the prominent examples today in political and popular culture, the best available research still clearly shows that in everyday life the nice people, not the creeps, do the best at work, in love and in happiness.” When it comes to looking for (or keeping) a job, Brooks asserts, “Everyone is looking for an edge. That edge is being pleasant and friendly.” He backs this assertion with various studies and polls. One of those studies was conducted by Christine L. Porath (@PorathC), an Associate Professor in the McDonough School of Business at Georgetown University, Alexandra Gerbasi (@gerbilocity), a Professor at the Surrey Business School, and Sebastian L. Schorch, a professor at Los Andes University. The Abstract for their study notes, “Workplace incivility is rampant and on the rise — with costs to individuals and organizations. … Recent research has suggested that being civil may be hazardous to influence, power, and income. Yet, throughout history, civil behavior has been extolled because it paid dividends to the person who behaved well. … We found that people who perceived a colleague as civil would be more likely to seek that person out for work advice and to see that person as a leader. The more the individual was perceived as civil by others in his or her network, the better his or her performance.”[2] Professor Porath discusses her work in the following video.

Brooks’ conclusion from the Porath, Gerbasi, Schorch study is, “In addition to being seen as natural leaders by co-workers, nice employees performed significantly better than others in performance reviews by senior supervisors. For those who make it to leadership, niceness is also a key to success.” Speaking of leadership, Brooks next points to an NBC poll that asked, “What’s better, money or a nice boss?” The poll found, “Most Americans would rather have a kind boss than a 10 percent raise. We prefer a nice romantic partner to a good-looking one. We choose kinder neighbors over bigger houses. And 9 in 10 of us say being kind to others makes us happier than having others be kind to us.”[3] Some other results are found in the following video:

Brooks goes on to note one study indicated there are both upsides to being nice (i.e., your less likely to be fired) and downsides (i.e., you might make less money than your nasty tempered colleague). He observes, “It is important to note that these researchers’ definition of agreeableness included ‘compliance’ with the will of others. In many cases, however, compliance is not niceness; it is weakness. To be truly nice is not to comply when you disagree, but rather to disagree without being disagreeable. It isn’t to please at any cost, but rather to avoid being unpleasant even while standing up for what is right.” Brooks’ final observation is about the romantic arena rather than the workplace. “The benefits of being nice extend to love,” he writes. His conclusions are drawn from a 2003 study conducted by scholars from the University of South Carolina.[4] The study examined the impact of being nice on perceived male attractiveness.” Brooks explains:

“They recruited 194 female volunteers to participate in a mock dating game in which they had to pick between two men, Todd and Mike. The researchers varied Todd’s levels of handsomeness and “niceness” while keeping Mike’s personality and looks constant and neutral. The results were clear and conclusive. When their looks were equivalent, ‘Nice Todd’ outperformed Neutral Mike. ‘Jerk Todd’ lost 85% of the time to Mike even when Todd was better looking.”

Some of the best “life advice” I have come across in area of civility comes from Ted Koppel who wrote, “Aspire to decency. Practice civility toward one another. Admire and emulate ethical behavior wherever you find it. Apply a rigid standard of morality to your lives; and if, periodically, you fail ­ as you surely will ­ adjust your lives, not the standards.” Follow that advice and you will live a happier, fuller, and more satisfying life.