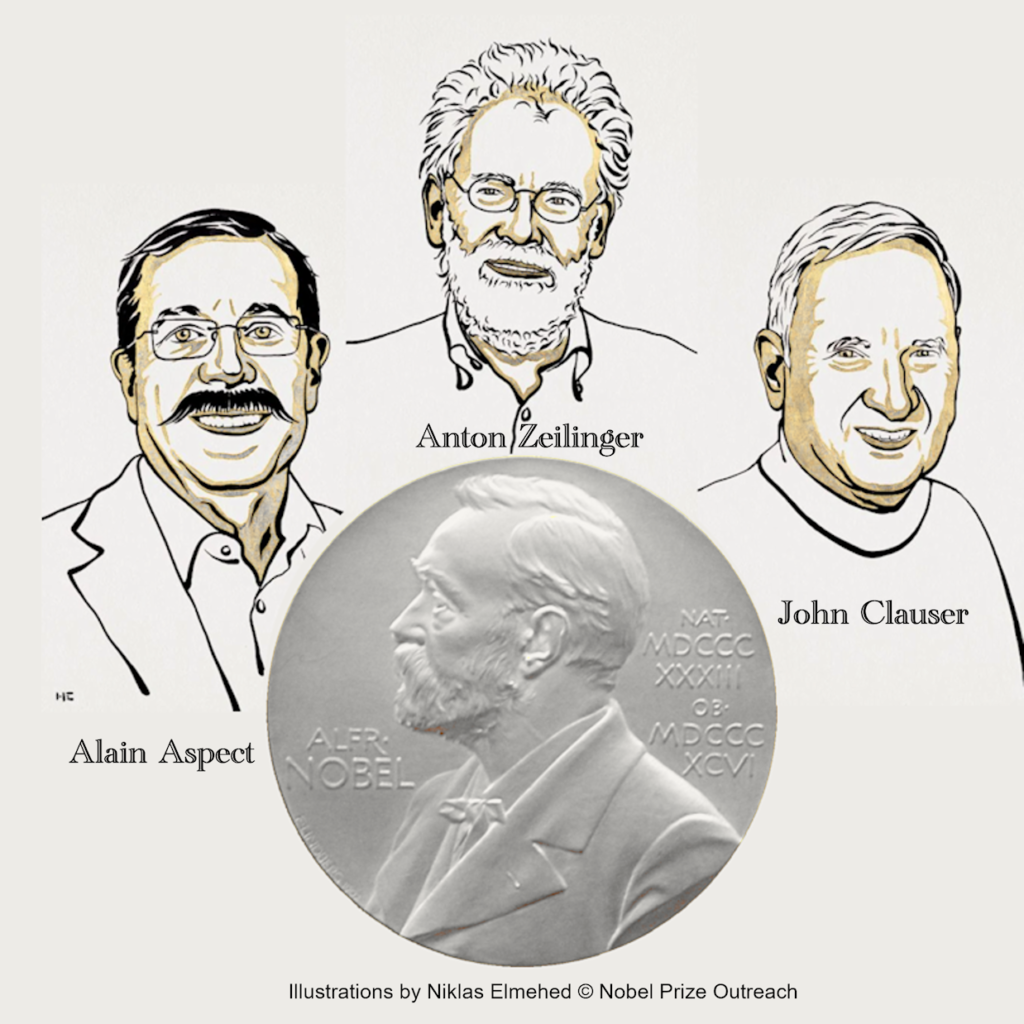 A couple of weeks ago, four scientists (Gilles Brassard, Charles H. Bennett, Peter Shor, and David Deutsch) working in the area of quantum physics and quantum computing were awarded the 2023 Breakthrough Prize in Fundamental Physics, one of the most prestigious awards in science.[1] Yesterday, three more scientists working in the area of quantum physics were awarded the 2022 Nobel prize in physics for experiments with entangled photons and their work in pioneering quantum information science. The press release announcing the winners stated, “Alain Aspect, John Clauser and Anton Zeilinger have each conducted groundbreaking experiments using entangled quantum states, where two particles behave like a single unit even when they are separated. Their results have cleared the way for new technology based upon quantum information.”[2] The late Albert Einstein famously labeled particle entanglement “spooky action at a distance.”

When Einstein calls something “spooky,” you can bet the phenomenon is pretty weird. Entanglement seems to defy the known laws of physics. Reporters from the New York Times explain, “The laureates’ research builds on the work of John Stewart Bell, a physicist who strove in the 1960s to understand whether particles, having flown too far apart for there to be normal communication between them, can still function in concert, also known as quantum entanglement. According to quantum mechanics, particles can exist simultaneously in two or more places. They do not take on formal properties until they are measured or observed in some way. By taking measurements of one particle, like its position or ‘spin,’ a change is observed in its partner, no matter how far away it has traveled from its pair.”[3]

In his work, Bell attempted to answer questions raised in a 1935 paper by Albert Einstein, Boris Poldosky, and Nathan Rosen. Among the questions raised in that paper “was whether the measuring process actually somehow brought the properties [of entangled particles] into being, or whether they existed all along but without our being able to determine what they were.”[4] Science writer Alex Wilkins (@AlexWilkins22) explains, “Each of the winners’ experiments carried out a real-life test of a mathematical theorem first proposed by physicist John Bell in 1964, called Bell’s theorem. This attempts to measure whether quantum mechanics is like the billiard-ball model of Newtonian mechanics, where one thing must follow another at a local scale, or whether particles separated by any amount of space can affect each other. Bell’s proposal involved measuring the properties of two entangled particles in a system isolated from anything else that could influence the results — such as an observer inadvertently affecting an entangled partner through measurement — to see if they exceed a certain value, creating a mathematical inequality and proving that local effects alone can’t explain quantum mechanics.”

The staff at Phys.org notes, “The Nobel committee said Clauser, 79, developed quantum theories first put forward in the 1960s into to a practical experiment. Aspect, 75, was able to close a loophole in those theories, while Zeilinger demonstrated a phenomenon called quantum teleportation that effectively allows information to be transmitted over distances.”[6] The staff adds, “When he began his research, Zeilinger said the experiments were ‘completely philosophical without any possible use or application.’ Since then, the laureates’ work has been used to develop the fields of quantum computers, quantum networks and secure quantum encrypted communication.”

Reuters correspondents add, “In background material explaining the prize, the academy said the laureates’ work involves ‘the mind-boggling insight that quantum mechanics allows a single quantum system to be divided up into parts that are separated from each other but which still act as a single unit. This goes against all the usual ideas about cause and effect and the nature of reality.’ … The Academy said that as a result of their work, development was underway to use the ‘special properties of individual particle systems to construct quantum computers, improve measurements, build quantum networks and establish secure quantum encrypted communication.’ … The physics prize has often taken center stage among the awards, featuring household names of science such as Albert Einstein, Max Planck, Pierre Curie and Marie Curie, and rewarding breakthroughs that have reshaped how we see the world.”[7]

The Phys.org staff notes the experiments and work of these laureates have “laid the foundation for the current intense research in quantum information science. Being able to manipulate and manage quantum states and all their layers of properties gives us access to tools with unexpected potential. This is the basis for quantum computation, the transfer and storage of quantum information, and algorithms for quantum encryption.”

Congratulations to all of the laureates for their well-deserved honor.