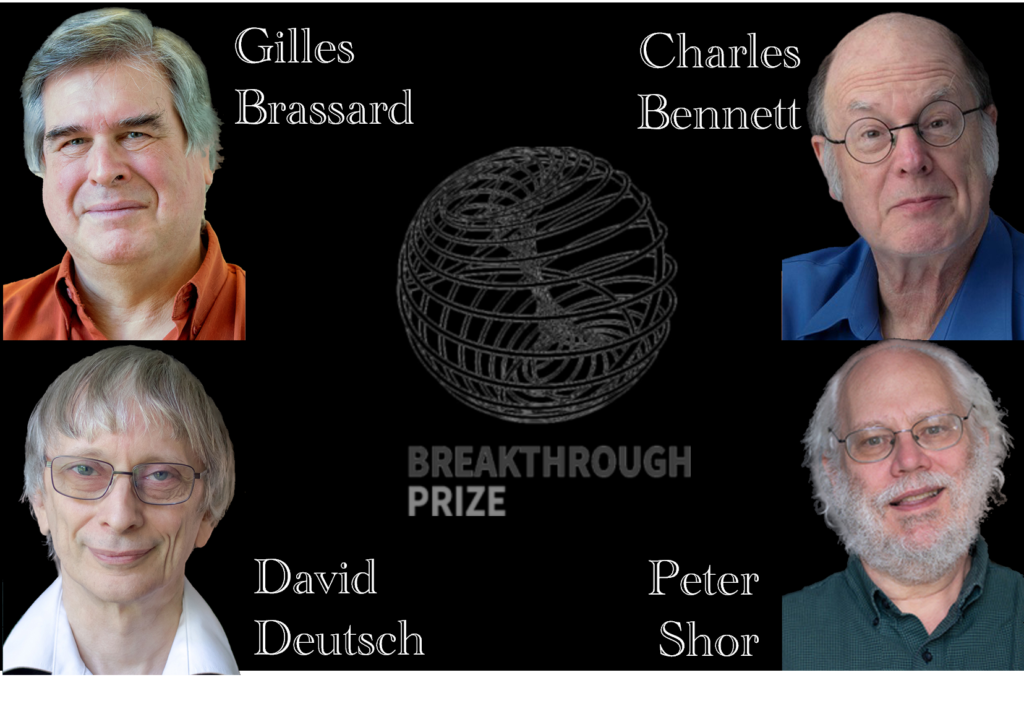 One of the most intensive international competitions currently underway is the development of a viable, programmable quantum computer. Science writer Daniel Garisto (@dangaristo) reports, “As billions of dollars pour into quantum computing and countries build communication networks secured by quantum encryption, the prominence of quantum information science has become increasingly hard to ignore.”[1] It should come as no surprise, therefore, that scientists working in the area of quantum physics and quantum computing are beginning to receive well-earned recognition. Colin Hunter (@Call_me_Colin), Director of Communications at the Perimeter Institute for Theoretical Physics, notes, “Four scientists whose research helped launch the quest for quantum computing have been awarded the 2023 Breakthrough Prize in Fundamental Physics, one of the most prestigious awards in science. Gilles Brassard, Charles H. Bennett, Peter Shor, and David Deutsch were among the first scientists to recognize the incredible potential in harnessing quantum phenomena for quantum information processing and cryptography.”[2]

The four scientists will split the $3 million Breakthrough Prize in Fundamental Physics — an award that was founded in 2012 by Yuri Milner to recognize those individuals who have made profound contributions to human knowledge. In a day and age in which controversy reigns, some naysayers have raised concerns about the award because of Milner’s ties to Russia. Garisto explains, “Similar to Alfred Nobel, whose Nobel Prize–funding fortune arose from his invention of dynamite, Milner’s past financial ties to the Kremlin have drawn scrutiny, especially in light of Russia’s ongoing invasion of Ukraine. In previous interviews, Milner has emphasized his independence and donations to Ukrainian refugees. A spokesperson pointed out to Scientific American that Milner relocated to the U.S. in 2014 and has not returned to Russia since.”

According to the Breakthrough Prize Foundation website, the prize is open to all physicists — theoretical, mathematical, experimental — working on the deepest mysteries of the Universe.” The website also notes, “Insights from fundamental physics have overturned our assumptions about the world around us. Last century, general relativity reshaped our picture of space and time, and quantum mechanics replaced the march of cause and effect with a dance of probabilities. Recently scientists have discovered that dark matter and dark energy account for most of the contents of the Universe. This century is likely to produce more surprises. From the Planck length to the cosmic scale, physicists are opening windows into the deep structure of reality.” The Breakthrough Foundation press release announcing the winners stated:

“With their BB84 protocol, Charles H. Bennett and Gilles Brassard, building on Stephen Wiesner’s seminal but impractical idea of quantum money, initiated quantum cryptography by devising a practical way to send secret messages between users who share no secret information initially. Unlike methods commonly used in e-commerce, it cannot be broken even by an eavesdropper with unlimited computing power. Their 1993 discovery, with collaborators, of quantum teleportation, showed that entanglement is a useful quantifiable resource despite having no communication capacity of its own, thereby helping launch the new science of quantum information processing.

“David Deutsch laid the foundations of quantum computation. He defined the quantum version of a Turing machine — a universal quantum computer, and proved that it could simulate to arbitrary accuracy any physical system that obeys the laws of quantum mechanics. He showed that such a computer is equivalent to a network of surprisingly few quantum gates — logic gates that leverage entanglement and the quantum superposition of many states at once. And he designed the first quantum algorithm that surpasses the best equivalent classical algorithm.

“Peter Shor went on to invent the first quantum computer algorithm that was clearly useful. Shor’s algorithm can find the factors of large numbers exponentially faster than is thought to be possible for any classical algorithm. He also designed techniques for error-correction in quantum computers — a much harder feat than in classical computers, where simple redundancy will suffice. These ideas not only paved the way for today’s fast-developing quantum computers; they are now also at the frontiers of fundamental physics, especially in the study of metrology — the science of measurement — and of quantum gravity.”

As noted above, Brassard and Bennett give credit to early thinking by Stephen Wiesner. Garisto fills in some of that background. He writes:

“In 1968, Stephen Wiesner, then a graduate student at Columbia University, developed a new way of encoding information with polarized photons. Among other things, Wiesner proposed that the inherently fragile nature of quantum states could be used to create counterfeit-resistant quantum money. Unable to publish many of his heady theoretical ideas and drawn to religion, Wiesner, who died last year, largely quit academia to become a construction worker in Israel. Before Wiesner left Columbia, he passed along some of his ideas to another young researcher. ‘One of my roommates’ boyfriends was Stephen Wiesner, who started telling me about his “quantum money,”‘ Bennett recalls. ‘[It] struck me as interesting, but it didn’t seem like the beginning of a whole new field.’ In the late 1970s Bennett met Brassard, and the two began discussing Wiesner’s money, which they imagined might require the improbable task of trapping photons with mirrors to create a quantum banknote. ‘Photons are not meant to stay — they’re meant to travel,’ Brassard says, explaining the thought process. ‘If they travel, what’s more natural than communicating?’ The protocol Bennett and Brassard proposed, called BB84, would launch the field of quantum cryptography. Later detailed and popularized in Scientific American, BB84 allowed two parties to exchange messages with utmost secrecy. If a third party snooped, they would leave indelible evidence of their interference — like damaging a quantum wax seal.”

Quantum computing is becoming a hot topic in political circles as well as in the business and scientific sectors. Earlier this year, Chuck Brooks (@ChuckDBrooks), President of Brooks Consulting International, told conference participants in London, “As quantum computing capabilities advance, we should act now to prepare for the implications of developing exponentially greater analytical capabilities. Quantum computing has the potential to disrupt industries and propel technological development, but can also create significant global security risks. It is important to invest, collaborate, and have a plan for any quantum contingencies.”[3] As the Breakthrough Prize bears testament, much more research is going to be focused on this important area of study and no country wants to be left behind.