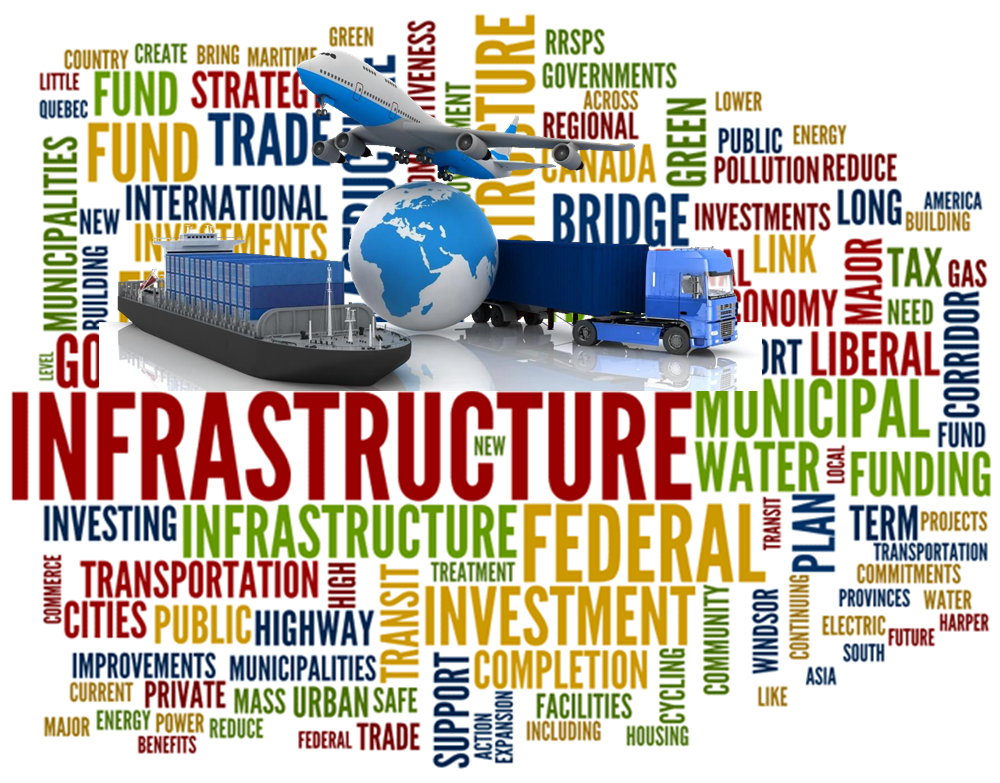 According to a 2014 study commissioned by the National Association of Manufacturers (NAM) and conducted by the University of Maryland’s Inforum, “Domestic GDP would increase 1.3 percent by 2020 and 2.9 percent by 2030 if public and private sources focused on a ‘targeted and long-term increase in public infrastructure investments.'”[1] Jon Ross adds, “Other benefits include the addition of 1.3 million jobs over the next 15 years; an economy that will become more productive, returning $3 on every $1 invested; and an increase in take-home pay for the average citizen.”[2] The need to invest in infrastructure seems to be one of the only topics on which Republicans and Democrats seem to agree. Even the fiscally conservative International Monetary Fund (IMF) believes that “in the current global environment of sub-par growth, there is a strong case for increasing public investment in countries where conditions are right.”[3] Even with agreement on both sides of Congress’ aisle, publicly-supported projects are not moving ahead as a result of the polarization that now dominates the Washington scene.

The IMF’s reasons for suggesting that now is a good time to invest in infrastructure are contained in its flagship publication, the 2014 World Economic Outlook. The study concludes:

“Many advanced economies are stuck in a low growth and high unemployment environment, and borrowing costs are low. Increased public infrastructure investment is one of the few remaining policy levers to support growth. In many emerging market and developing economies, infrastructure bottlenecks are putting a brake on how quickly these economies can grow. … Infrastructure is the backbone of everyday life, underpinning economic activity. There is no activity that does not rely on infrastructure in some form. Conversely, inadequacies in infrastructure are quickly felt — power outages, insufficient water supply, and decrepit roads adversely affect people’s quality of life and present significant barriers to the operation of firms.”

Although America’s unemployment picture has improved, its deteriorating infrastructure has not. When discussing the NAM-sponsored University of Maryland study, Jay Timmons (@JayTimmonsNAM), NAM’s president and chief executive officer, stated:

“The United States is stuck in a decade-long period of decline that will eventually harm job creation, future productivity and our ability to compete head-to-head with companies all over the globe. As we sit idle, our competitors are churning out investments in their infrastructure. As this study demonstrates, substantial economic benefits result from a targeted and long-term increase in public infrastructure investments from public and private sources.”

Howard Sosoff, Manufacturing & Distribution practice leader at BDO USA LLP, adds even more fuel to the infrastructure discussion by noting, “Today there are more than 4 million miles of road, 600,000 bridges, and 3,000 transit providers in the U.S. that have been impacted from the falling share of GDP dedicated to transportation from federal, state and local levels — while population, congestion, and maintenance backlogs have increased. … If this lack of investment and attention persists, it could be a significant roadblock to a flourishing manufacturing industry here in the homeland.”[4] And I as pointed out in a previous article, “Manufacturing is Still Critical for a Healthy Economy.” With everyone apparently in vicious agreement, the question is: Why is so little being done? The simple answer is: Money. How to pay for infrastructure improvements remains the sticking point.

Referring to the IMF study, Lawrence Summers, a professor at and past president of Harvard University, notes, “Properly designed infrastructure investment will reduce rather than increase government debt burdens. Stated boldly: Public infrastructure investments can pay for themselves.” Although that sounds counterintuitive, here’s Summers’ reasoning:

“Consider a hypothetical investment in a new highway financed entirely with debt. Assume — counterfactually and conservatively — that the process of building the highway provides no stimulative benefit. Further assume that the investment earns only a 6 percent real return, also a very conservative assumption given widely accepted estimates of the benefits of public investment. Then, annual tax collections adjusted for inflation would increase by 1.5 percent of the amount invested, since government claims about 25 cents out of every additional dollar of income. Real interest costs — that is, interest costs less inflation — are below 1 percent in the United States and much of the industrialized world over horizons of up to 30 years. Thus, the infrastructure investment actually makes it possible to reduce burdens on future generations.”

Summers believes his hypothetical “calculation understates the positive budgetary impact of well-designed infrastructure investment.” Ron Haskins, a senior fellow in Economic Studies at the Brookings Institution, believes, “The case for infrastructure investment could hardly be stronger.”[5] Haskins believes that as we look to the future “one of the most important opportunities relates to the nation’s infrastructure — its roads, bridges, ports, airports, and other investments that help the the private sector and government to conduct its business. We have a lot to gain by maintaining or even improving these public goods, and a lot to lose if we don’t.” He adds, “Who can forget I-35W in Minneapolis falling into the Mississippi River in 2007, taking 13 lives with it and disrupting traffic for the next year while the bridge span was replaced?”

​Like Summers, Haskins believes, “The problem is financing.” The headline to his article succinctly states how he would find the money, namely, raise the gasoline tax. That’s probably a non-starter given that Congress is now controlled by Republicans. Haskins, however, argues:

“Even for those opposed to tax increases, the reasons to increase the gas tax are legion. First, the gas tax isn’t really a tax, but a user fee, since it places the burden of paying for roads and bridges only on those who use them. Further, in terms of purchasing power, an increase of 10 to 15 cents per gallon would restore the tax to more or less the same value as in 1993. In addition, the dramatic fall in gas prices, which have declined by nearly half since reaching over $4 a gallon in in the summer of 2008, means that Americans could pay the 10 to 15 cents tax increase and still enjoy a much lower price at the pump than they have been paying for many years. But the biggest reason of all is that investments in transportation-made wisely-pay for themselves through increased employment, safety, and efficiency. These benefits will steadily decline unless the Highway Trust Fund is maintained.”

“In the United States, the imperative is long-term budgeting for infrastructure that recognizes its benefits, as well as its costs. There is a critical need for regulatory reform to enable projects to be approved and carried forward with reasonable speed. There is also a need for recognition that government can make a critical contribution to infrastructure investment by supporting private investments in such areas as telecommunications and energy.”

Jeffrey Werling (@JeffWerling), Executive Director of the University of Maryland’s Inforum, perhaps stated it best, “We know that well-planned infrastructure investments can provide high, long-term returns to investment, and they can also boost jobs and growth in the short term. It is time to cut through the political smoke and mirrors to make a commitment to stronger and smarter infrastructure investment.”