Innovation: Too Much Talk, Not Enough Action

Aaron Shapiro, CEO of Huge, a global digital agency, writes, “These days, every established company is at risk of having its industry–and its own business–disrupted by a startup. Cognizant of this, companies devote a lot of time to talking about how important it is to innovate. But here’s the truth: most companies can’t innovate because everyone is paid to maintain the status quo.” [“Stop Blabbing About Innovation And Start Actually Doing It,” Fast Company, 16 April 2012] Leslie Kwoh agrees with Shapiro that a lot more talking than innovating is being done in corporate America. She writes, “Got innovation? Just about every company says it does. … But that doesn’t mean the companies are actually doing any innovating.” [“You Call That Innovation?” Wall Street Journal, 22 May 2012] Kwoh worries that the overuse of the word “innovation” will eventually undermine the importance that companies place on innovating. Kwoh underscores her point using the attached graphic (see below). She continues:

“Businesses throw around the term to show they’re on the cutting edge of everything from technology and medicine to snacks and cosmetics. Companies are touting chief innovation officers, innovation teams, innovation strategies and even innovation days. … They are using the word to convey monumental change when the progress they’re describing is quite ordinary. Like the once ubiquitous buzzwords ‘synergy’ and ‘optimization,’ innovation is in danger of becoming a cliché—if it isn’t one already.” 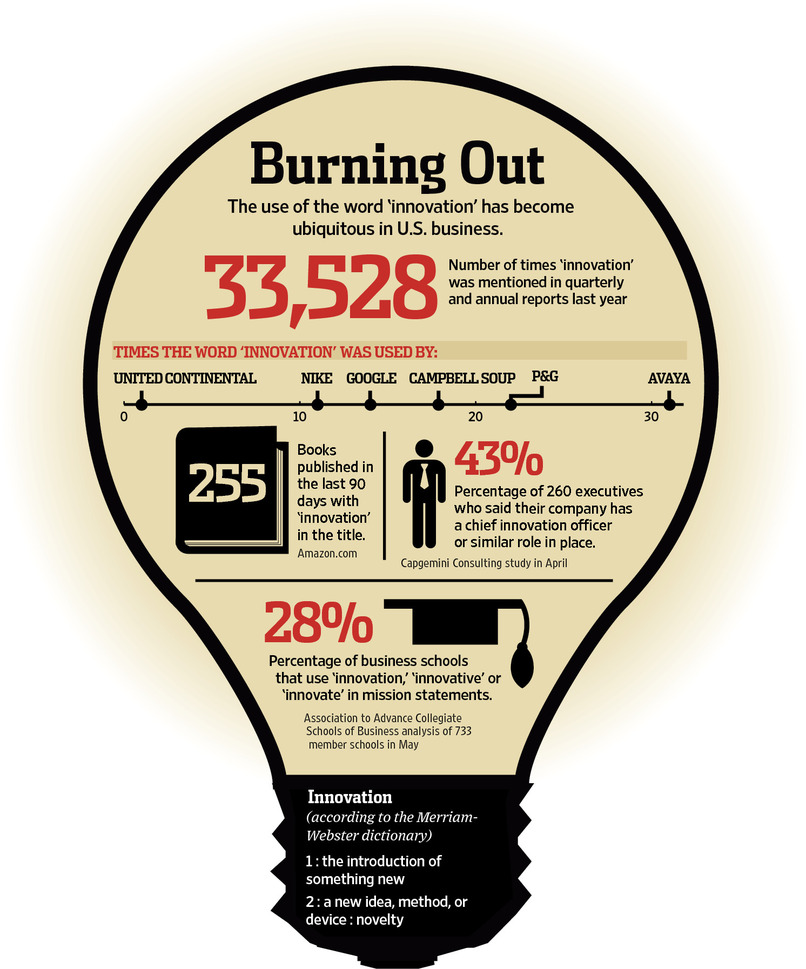 Kwoh’s concern isn’t new. Five years ago Dan Saffer, a designer at Adaptive Path, was saying much the same thing (see my post entitled The Cult of Innovation). I have pointed out in past posts that “real” innovation, put in a mathematical formula, would look like this: innovation = new x valuable x realized. If any of those variables is missing (i.e., if any of those variables = 0) then you can rest assured whatever you’re discussing is not an innovation. The problem is that over the years people have added modifiers to the term “innovation” — like “incremental innovation.” That’s how “new and improved” products were suddenly touted as being innovative. Harvard Business School professor Clayton Christensen told Kwoh, “”Most companies say they’re innovative in the hope they can somehow con investors into thinking there is growth when there isn’t.” Kwoh continues:

“The definition of the term varies widely depending on whom you ask. To Bill Hickey, chief executive of Bubble Wrap’s maker, Sealed Air Corp., it means inventing a product that has never existed, such as packing material that inflates on delivery. To Ocean Spray Cranberries Inc. CEO Randy Papadellis, it is turning an overlooked commodity, such as leftover cranberry skins, into a consumer snack like Craisins. To Pfizer Inc.’s research and development head, Mikael Dolsten, it is extending a product’s scope and application, such as expanding the use of a vaccine for infants that is also effective in older adults. Scott Berkun, the author of the 2007 book ‘The Myths of Innovation,’ which warns about the dilution of the word, says that what most people call an innovation is usually just a ‘very good product.’ He prefers to reserve the word for civilization-changing inventions like electricity, the printing press and the telephone—and, more recently, perhaps the iPhone.”

Berkun told Kwoh that “the word appeals to large companies because it has connotations of being agile and ‘cool,’ like start-ups and entrepreneurs.” Kwoh notes that an entire industry has sprung up around “the innovation trend. … In addition, four in 10 executives say their company now has a chief innovation officer. … [However,] most of the executives conceded their companies still don’t have a clear innovation strategy to support the role.” Kwoh concludes:

“Innovation is hardly a new term. The word, which derives from the Latin noun innovatus, meaning renewal or change, appeared in print as early as the 15th century, according to Robert Leonard, chairman of Hofstra University’s linguistics program. As companies have sped up product cycles, the word has come to signify not just doing something new but also doing it more quickly, he says. … Mr. Christensen classifies innovations into three types: efficiency innovations, which produce the same product more cheaply, such as automating credit checks; sustaining innovations, which turn good products into better ones, such as the hybrid car; and disruptive innovations, which transform expensive, complex products into affordable, simple ones, such as the shift from mainframe to personal computers. A company’s biggest potential for growth lies in disruptive innovation, he says, noting that the other types could just as well be called ordinary progress and normally don’t create more jobs or business. But the disruptive innovations can take five to eight years to bear fruit, he says, so companies lose patience.”

Aaron Shapiro writes that we shouldn’t be surprised that there is more talk than action surrounding innovation. “Companies are set up to do one thing very well,” he states. “That’s the business they’re in. All of the roles in the company are defined and structured to create the best environment for doing that one thing as efficiently as possible.” That means that any activity that could disrupt that environment is likely to create tension. Shapiro continues:

“Change is discouraged by time constraints and the stifling number of approvals needed. Failure is punishable by pink slip. Every day is the same. Yet, today, your entire industry can change in the space of a headline. If your business can’t innovate, it won’t survive when the startup in the garage across town that doesn’t have to answer to your shareholders does all the things legal has been telling you that you can’t do, all the things that you don’t have time for. It’s never been more urgent to stop talking about innovation and actually start doing things differently. And, with digital, the opportunities have never been greater. … Overcome the structural impediments and time constraints to real change by approaching innovation from two directions: outside-in and inside-out.”

“‘Outside-in,’ when not based on acquisition, often comes in the form of a skunkworks project. It’s colloquially defined as a startup funded by the parent company, but kept separate from the dysfunction and sluggishness of the whole, in order to incubate great technological advancements. I’ve referenced this tactic before, as the first step big businesses should take to evolve their organizational structures. Google, JetBlue, NBCUniversal, and News Corp. have all used the strategy. Here’s the recipe:

“Set the right goals. A skunkworks project should be tasked with developing a new, specific tech product or service.

“Give the team freedom to create. Bureaucracy, office politics, and the aforementioned requirement to keep the ship sailing straight ahead all slow down and inhibit big advancements. To succeed, the skunkworks team must be kept free from these deterrents.

“Appoint separate senior management. Management by committee is not an option. The quickest route to failure is slow decision making. The skunkworks team should report directly to a senior-level executive who is authorized to green-light initiatives that are separate from the company’s main purpose and to implement these new solutions.

“Choose a separate location. The team should not be housed in the corporate headquarters. Ideally, it should live nearby, but in some cases, it needs to be in a completely different location to be able to access the right talent. When Johnson & Johnson decided to build a unit oriented to design, creativity, and technology, the division planted a flag in an old industrial building in a trendy neighborhood in New York. Its corporate headquarters are in suburban New Jersey.

“Mix up the staff. The staff should be a healthy hybrid of high-performing internal employees and newbies, so that some participants are familiar with the company’s core business while others have an open mind and fresh ideas.

“Give it time. Really well-developed products often take a year from the time people start working on them until launch. You can get things done in six to nine months, but it’s unusual, especially if the team refines it with iterative improvements.

“Bring it back into the fold. Once the project is complete, skunkworks team members should move back in with the parent company. They either become a distinct department or are dispersed throughout the company, in order to effectively run and manage the particular product.”

In the first of my posts on outside-in innovation, I concluded, “Being open-minded about where ideas and insights come from could prove valuable (even business saving). Savvy business executives should actively look for people with new perspectives that can help them see their industry and future in a new way.” On the other hand, a “not invented here” attitude could prove fatal to a business.” Turning to inside-out innovation, Shapiro writes:

“‘Inside-out’ innovation is all about incentivizing existing staff members to be revolutionary within their own jobs. The most important ingredients are largely cultural:

“Freedom to fail. Traditionally, companies are averse to risk, so if you fail at something, it hurts your career. But to innovate, you need to be able to try new things without risking your livelihood. As Thomas Edison said, ‘I have not failed. I’ve just found ten thousand ways that won’t work.’

“Free time. Performance evaluations for managers should include assessment of the volume and quality of new ideas they brought to the table. If the company’s priority is solely productivity, no one will have time to think about creating something new, let alone bring it to life.

“Training. An office that encourages and facilitates education openly admits there’s room to grow and inspires people take that leap.

“The risk involved in these changes is less than the risk of not making them. Innovation is outside the comfort zones of most businesses–but so is Chapter 11.”

I concluded my posts on outside-in and inside-out innovation this way: “I don’t believe there is a ‘silver bullet’ approach for institutionalizing innovation. Individual companies need to look at the challenges they face, the assets they have on hand, and potential return on investment of the various innovation approaches. Almost every approach, however, involves some kind of team or community. Carefully crafted teams of cross-functional experts seem to have broad applicability across most organizational settings. Whether those teams include people both inside and outside of the company is your decision.” I agree with Shapiro and Kwoh that we need more action and less talk.