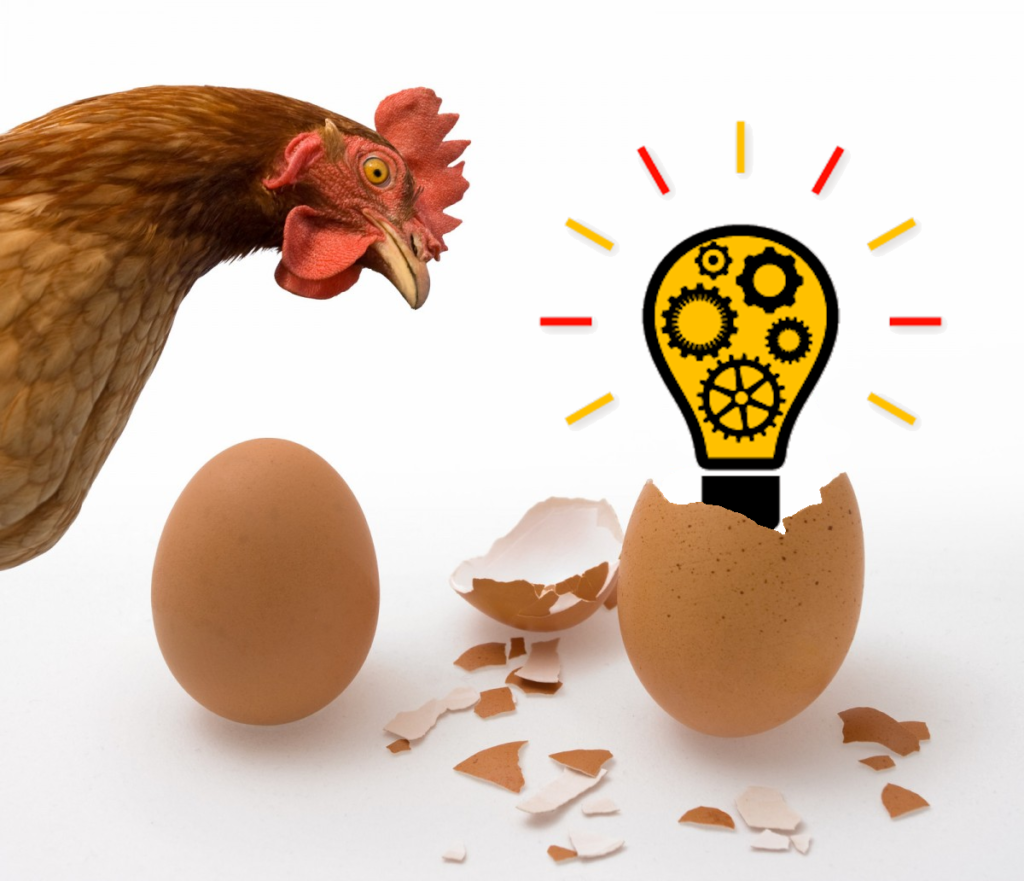 Innovation: People, Process, or Both?

“What’s more critical to producing a breakthrough innovation,” asks Andrea Ovans, Senior Editor of the Harvard Business Review, “finding creative people or finding creative ideas?”[1] Since the image that accompanies Ovans’ article depicts a chicken and an egg, you shouldn’t be expecting her to provide a definitive answer to that question. Ovans reports that a search through the HBR archives reveals that a number of business leaders find themselves clearly in the camp that believes people come before process. For example, Ed Catmull, head of Pixar, told HBR, “Talent is rare,” and Bernard Arnault, Executive Chairman of luxury goods maker LVMH, stated, “Our whole business is based on giving our artists and designers complete freedom to invent without limits.” She also places well-known creativity guru Michael Schrage in that camp. Schrage believes it is “people’s passion for innovation” complemented by a culture that fosters creative passion that leads to real innovation. I would probably have to place the late Isaac Asimov, in that camp as well. When he was asked to provide his thoughts on innovation, he wrote, “What is needed is not only people with a good background in a particular field, but also people capable of making a connection between item 1 and item 2 which might not ordinarily seem connected.”[2] He added:

There is no room for doubt that some individuals are smarter or more talented or more creative and/or more driven than other people. On that point, I agree with Catmull, “Talent is rare.” Asimov would probably have agreed with that conclusion (i.e., that true innovation comes from people who can, by themselves, make cross-connections between disparate ideas); nevertheless, the very idea of being able to make cross-connections leaves the door open for a process that can accomplish the same thing. Frans Johansson believes that is exactly what the Medici family was able to do in the early days of the Renaissance when it used its wealth to gather artists, philosophers, theologians, and scientists inside its court and were able to help lift the pall of the Dark Ages. In the family’s honor, Johansson calls this process “The Medici Effect”. Even though the Medicis provided a collaborative space, the individuals who graced the Medici’s court were the best of the best and the Medicis themselves would probably have subscribed to the camp that believes that people rather process are the true fount of innovation.

Ovans points out, however, that there is another camp. She writes, “Let’s call this the ‘In my ideal world, great ideas are generated through a process anyone can follow’ camp.” In this camp, she places people like Steven Eppinger, whose article “Innovation at the Speed of Information” detailed the process that chipmaker Intel uses. The Intel process is “based on the precise exchange of information.” Also in this camp she places Robert Sutton (@work_matters and Andrew Hargadon (@andrewhargadon), authors of the article “Building an Innovation Factory,” who believe that the practice of innovation is something closer to a production process than a creative process. Ovans adds, “Lego has used the systems approach to great effect; P&G has arguably elevated the factory approach to its most elaborate.” Leslie Brokaw (@lesliebrokaw), a contributing editor for digital media at MIT Sloan Management Review, reports that many Chinese companies also believe in the “innovation factory” model. “New research shows that Chinese companies are industrializing innovation in surprising — and surprisingly effective — ways,” she writes, “According to Peter J. Williamson and Eden Yin, both of University of Cambridge’s Judge Business School, this industrializing of innovation is improving speed and cost by applying lessons from an aspect of manufacturing that seems antithetical to innovation: the production line.”[3] She explains:

The very fact that Williamson and Yin hedge their conclusion by noting that these companies “leverage the potential of a large pool of competent but often unexceptional technicians and engineers” explicitly accepts the reality that some of these technicians and engineers are exceptional. In other words, Chinese companies are using a system that uses both exceptional people and exceptional processes. One of the first companies to use this kind of approach was the Lockheed Aircraft Corporation. They informally called this approach the Skunk Works. If you are not an aviation buff, you may never have heard of the Skunk Works. The name “Skunk Works” was lifted from a moonshine factory that was featured in a popular comic strip called “Li’l Abner” that was published nationally beginning in 1934. Skunk Works eventually became the unofficial (and now official) alias of Lockheed Aircraft Corporation’s (now Lockheed Martin’s) once secretive design group. The Skunk Works is responsible for a number of famous and successful aircraft designs, including the U-2, the SR-71 Blackbird, and the F-117 Nighthawk. Each of these aircraft had to be designed in secret; but, the most well-known trait of the Skunk Works is designing great products in record time. The first project produced by the Skunk Works, the XP-80. It was designed in only 143 days.

Peter Gloor (@pgloor), a research scientist at MIT’s Center for Collective Intelligence, calls this kind of Skunk Works approach Collaborative Innovation Networks (COINs).[4] “Gloor believes that COINs are becoming increasingly important as an engine of innovation for large organizations that must keep pace with fast-moving markets.” The article continues:

“The basic process for setting up a COIN typically starts with a highly motivated, creative person, who has an idea he or she wants to bring to fruition. This evangelist recruits a group of like-minded allies — maybe three to 12 people — to carry the project forward. Once the initial, outlandish idea has been translated into a prototype, more collaborators are attracted to the project to form a collaborative learning network; the incubator for the COIN. Importantly from a supply chain perspective, the original idea can be an innovative process, and the COIN might span more than one organization to include, say, enthusiasts from a manufacturer and a core supplier. For example, in 2004/5 people from Ford and a core supplier formed COINs to design parts for the new Ford Focus. The initiative also led to fundamental changes in the supply chain for the parts. Another key feature of these networks is that they have a rotating leadership. As Gloor explains, once established, a COIN needs different types of leadership as it evolves. At first, the leader is a missionary who drives the group’s work. As the project matures, it requires more sales skills at the top. Also, leaders motivate and nurture the efforts of the participants, but have relatively little power over the group.”

I’m hoping that when Gloor talks about “like-minded allies” he is referring to attitude rather than knowledge. In order to produce the Medici Effect, you need to gather people from different disciplines so that unique perspectives can be brought into the group. One sure way to kill innovation is to get involved in “group think.” Obviously, the chicken or egg question asked by Ovans at the beginning of this article has no clear answer. The real problem is that question is framed incorrectly. The best question to ask is, “What processes can best be used to get the most out of my people?” Either/or questions rarely achieve the best results.