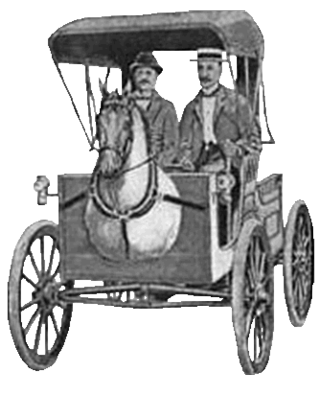 “Do you ever wonder why cars aren’t called ‘horseless carriages’ anymore?” asks Ian Gonsher and Deb Mills-Scofield. “Today’s cars are just as horseless as they were a century ago. Horselessness is standard equipment on most new and late models, both foreign and domestic.” [“Great Innovators Think Laterally,” HBR Blog Network, 23 April 2013] The anachronism “horseless carriage” is, of course, as outdated as “wireless radio” and “icebox.” Yet each of those descriptors at one time literally and accurately described the object. Descendants of those products still exist, but the names haven’t survived. That’s the point that Gonsher and Mills-Scofield are trying to make. They write:

“Framing the question this way may seem a bit absurd; yet, it’s a playful reminder that innovation does not emerge out of nothing. New innovations evolve from historical, iterative processes. The automobile developed out of, and in opposition to, concepts associated with the horse and carriage. This was the familiar frame of reference when the automobile first emerged. Early automobiles extended and adapted the accustomed 19th century understanding of locomotion.”

In an earlier post entitled Analogies and Innovation, I pointed out that analogies are often used to explain innovative products by comparing them to other similar, but older, products. Eventually the analogies are no longer required and the once-innovative product becomes the analogy for next-generation innovations. Gonsher and Mills-Scofield note that the automobile, in some ways, remains a metaphor of horse and buggy days. “Consider the form of a car’s design,” they write. “You can see how four legs evolved into four wheels and headlights into the eyes of our metal beasts of burden. The vestiges of formative features still affect how we make sense of the built environment and our material culture, even if the original antecedent has long been forgotten.” Although I believe the car more resembles the buggy than the horse, they make an interesting point. In the case of the automobile and the radio, their first descriptors (i.e., horseless and wireless) indicated they were opposite of things that relied on horses on wires. Gonsher and Mills-Scofield report, “Often, when searching for a new way to understand a familiar idea, we look for its opposite. By doing this, we create a spectrum of possibilities between what it is and what it is not.”

Another way of thinking about creating “a spectrum of possibilities” is by looking at a challenge from a number of different perspectives. Looking from the opposite side is just one possible perspective. Like most creativity gurus, John G. Agno believes that changing perspective is an essential part of the innovation process. The reason, Agno states, is because changing perspectives helps us break free of ingrained beliefs and assumptions. “Our assumptions/beliefs are the elements we use to construct new ideas in our imagination,” he writes, “and they constrain us to what we readily accept and believe is possible.” [“Shift Perspective to Get Innovation Right,” Coaching Tip: The Leadership Blog, 19 April 2013] He continues:

“Shifting perspective is essential if you are going to get innovation right according to Seth Kahan, author of ‘Getting Innovation Right.’ Shifting perspective should put you in a new relationship to everything you thought you knew. From this new perspective, you’ll find it easier to innovate successfully. You must try to work your way around to seeing your business from ‘outside’ perspectives. Seeing your enterprise as your clients and partners view it means understanding why they do business or join forces with you. If you do not know the why of their participation, you are severely handicapped when it comes to expanding the value they have come to rely on you to deliver. However, when you know what your clients and partners believe is most valuable, your innovation program is more effective. When you see your operations from varying viewpoints, you sometimes spot opportunities to parlay what you are doing today into a new field altogether. Viewing your world from a different angle requires getting out of your own way, questioning the assumptions that likely have aided your success up to this point. It is not an easy task, but it is a skill all leaders must master if they want to innovate and reach levels beyond their current success.”

If changing perspectives was easy, there wouldn’t be so much written about it. Creativity coaches often offer exercises that can be used to force you to think from a different perspective. These exercises can involve things like asking the right questions, putting on “different hats,” using forced metaphors, and so forth. Gonsher and Mills-Scofield label the ability to change perspectives “lateral thinking.” They write, “Lateral thinking, the ability to move horizontally across different categories of thought, [and it] often manifests itself as a synthesis between seemingly incongruent ideas.”

Another (and probably better) way to get new perspectives is to involve people from different disciplines in the innovation process. This creates what Frans Johansson calls the “the Medici Effect” in his book of the same name. [The Medici Effect: Breakthrough Insights at the Intersection of Ideas, Concepts, and Cultures] Johansson talks about the value of creating a space in which people from diverse fields of expertise can get together to exchange ideas. The Medici’s, of course, were a wealthy and powerful Italian family who played an important role in the Renaissance. The family’s wealth permitted it to support artists, philosophers, theologians, and scientists, whose combined intellect helped burst the historical pall known as the Dark Ages.

Gonsher and Mills-Scofield make it clear that creativity isn’t about getting a good idea (i.e., experiencing the so-called “Eureka” moment), but realizing that the future is built upon the past when creating something entirely new. They conclude:

“The creative process is just that: a process. Recognizing value that others have missed doesn’t require preternatural clairvoyance. A well-honed creative process enables us to intuitively recognize patterns and use those insights to make inductive predictions about divergent ideas, both vertically within categories, and horizontally across categories. By understanding the genealogy of innovation within a given category, we can imagine what might come next. We need to break out of thinking that is solely based on what we know, what we assume, and what we’ve experienced. Many of us are so entrenched in our industries that we don’t know how to think laterally or horizontally. We usually go a mile deep but only an inch wide. We haven’t given our people and ourselves the time and opportunities to explore other industries, cultures designs, ways of being and doing, and other ‘adjacent possibilities.’ If you want to take your ‘car’ far beyond horses, even to the moon perhaps, you and your team need to understand the genealogy of innovation, of how you got to where you are, and look outside of that familiar world to see where you can go.”

“Shifting perspective produces new states of awareness. New awareness affords dramatic changes in the outcomes of actions taken. At the heart of design thinking is a awareness of the integrity between the object of innovation (a new experience, product, organization, policy, etc.) and the context in which it exists, including the user, use environment, technologies, delivery mechanisms, etc.” [“Perspective, once changed, can never go back,” Innovationship, 20 February 2013]

I like (and agree with) the title of Goldberg’s post. Once you’ve experienced the almost magical results that emerge from applying a number of perspectives against a particular challenge, you will never go back to applying a single perspective when challenges are again confronted.