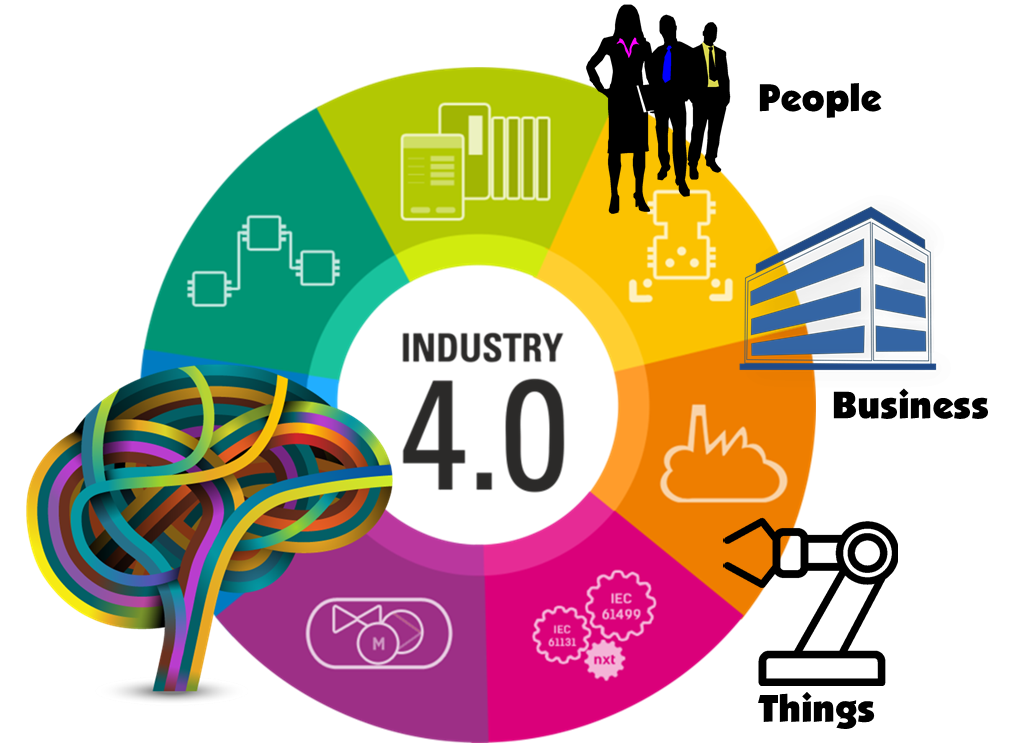 “As an industry,” writes Kimberly Knickle (@kimknickle), Research Vice President at IDC Manufacturing Insights, “manufacturing is ‘hot’.”[1] She reports that manufacturers are expected to spend upwards of $323 billion on external IT this year. “All of this change,” she concludes, “means that IT is increasingly an integral part of manufacturing’s success and we’re on our way to a digital transformation.” Knickle might be understating the situation. Many analysts believe we are at the dawn of a revolution, not just a transformation. The revolution (variously called the Fourth Industrial Revolution or Industry 4.0) is being fomented by the combination of artificial intelligence and automation. The revolution is expected to bring about such profound changes that it was the focus of this year’s meeting of the World Economic Forum in Davos, Switzerland. According to Murad Ahmed (@muradahmed), conclusions from the Davos meeting include: “Artificial intelligence will spur economic growth and create new wealth. Machines that ‘think’ like humans will help solve huge problems, from curing cancer to climate change. Yet millions of human workers will need to retrain, as robots make their existing jobs redundant.”[2] If you are a manufacturer, your company needs to ask: Are we part of the revolution or are we the group being overthrown?

Sebastian Thrun, the inventor of Google’s self-driving cars and an honorary professor of Technology at Delft University, told the Ahmed, “Almost every established industry is not moving fast enough [to adapt their businesses to this change].” In fact, Industry 4.0 is coming at us so fast that we have yet to develop a lexicon that can help explain it. For example, Dr. James Short, a Research Director at the Center for Large-Scale Data Systems Research Center in San Diego, believes, “Automation is an Industrial Age concept.”[3] Commenting on Short’s observation, Thomas H. Davenport (@tdav), a Distinguished Professor at Babson College, writes, “The implication is that automation is good for businesses where there isn’t much change, or in which products don’t vary much over time. In other words, we’re talking about business in the 1950s or thereabouts.” He continues:

“Successful businesses in the 21st century are generally those that respond rapidly to change. They introduce new products quickly. They deal with unexpected events. Humans are good at these types of change, and machines — even the smartest ones — generally aren’t. … The companies that employ entirely automated solutions to perform these processes will probably be those that are most shunned by customers. You know the situation today; many of us frantically press ‘0’ on our phones or yell ‘agent’ into the voice recognition system to try to get a human to help solve our problems. More automation will make those companies who do employ humans more differentiated. Competitively, automation is a fast route to a dead end.”

Where does that leave us on the road to Industry 4.0? Ahmed reports, “Delegates [at the Davos gathering] argued that advances in robotics and artificial intelligence will have the transformative effect that steam power, electricity and ubiquitous computing achieved in previous centuries.” That conclusion is true as far as it goes; but, I agree with Davenport that the companies differentiating themselves from their competitors will be those that find ways to augment human workers using robotics and artificial intelligence. At Enterra Solutions® we designed the Enterra Enterprise Cognitive System™ (ECS) — a system that can Sense, Think, Act, and Learn® — as a platform that can augment decision makers in the Industry 4.0 era. Although it’s capable of automating routine decisions (an industrial age capability), the ECS bolsters Industry 4.0 by generating actionable insights that help human decision makers deal with anomalies or other high-level, complex business decisions. Unburdened of the limitations found in previous analytic systems, the ECS can make sense of large numbers of variables that expose root causes of problems or point to more effective courses of action. Davenport concludes, “Many human jobs will persist because smart leaders will realize that augmentation — combining smart humans with smart machines — is a better strategy than automation. Organizations that care about innovation, agile response to change, and high-quality customer service will realize the value that humans bring to such essential attributes of contemporary business. We’re beyond the Industrial Age, and we should move beyond automation as a way to improve our businesses.”

Analysts from the Boston Consulting Group (BCG) also envision sweeping changes in how work is accomplished as Industry 4.0 matures. They explain, “Industrial production was transformed by steam power in the nineteenth century, electricity in the early twentieth century, and automation in the 1970s. These waves of technological advancement did not reduce overall employment, however. Although the number of manufacturing jobs decreased, new jobs emerged and the demand for new skills grew. Today, another workforce transformation is on the horizon as manufacturing experiences a fourth wave of technological advancement: the rise of new digital industrial technologies that are collectively known as Industry 4.0.”[4] They discuss ten ways that technology is going to change the industrial landscape as depicted in the following graphic. 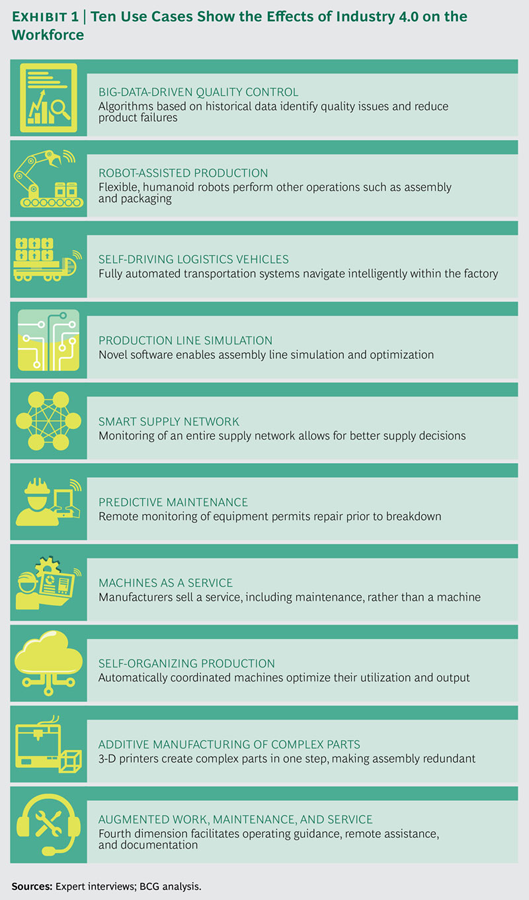 That list is well thought out and paints a pretty good picture of how the industrial landscape is going to change over the coming decades. And, if Thrun is correct, the landscape is going to change faster than most companies seem to believe it will. Knickle insists that digital transformation is the first step of the revolution. At the heart of this transformation are the cloud, big data analytics, social business models, and mobile technology. Those technologies allow companies to take the big leap and begin implementing next-generation security, augmented & virtual reality, the Internet of Things, cognitive systems, robotics, and 3D printing. Knickle concludes, “New technologies and enhancements are necessary to achieve the digital transformation required for the next generation of manufacturing. Manufacturers must review their current application portfolio; modernize processes in the back office and the plant, and in all aspects of the value chain upstream and downstream; and upgrade their decision-making capabilities.” I predict that cognitive computing systems will be central to most upgraded decision-making capabilities in the Industry 4.0 era.