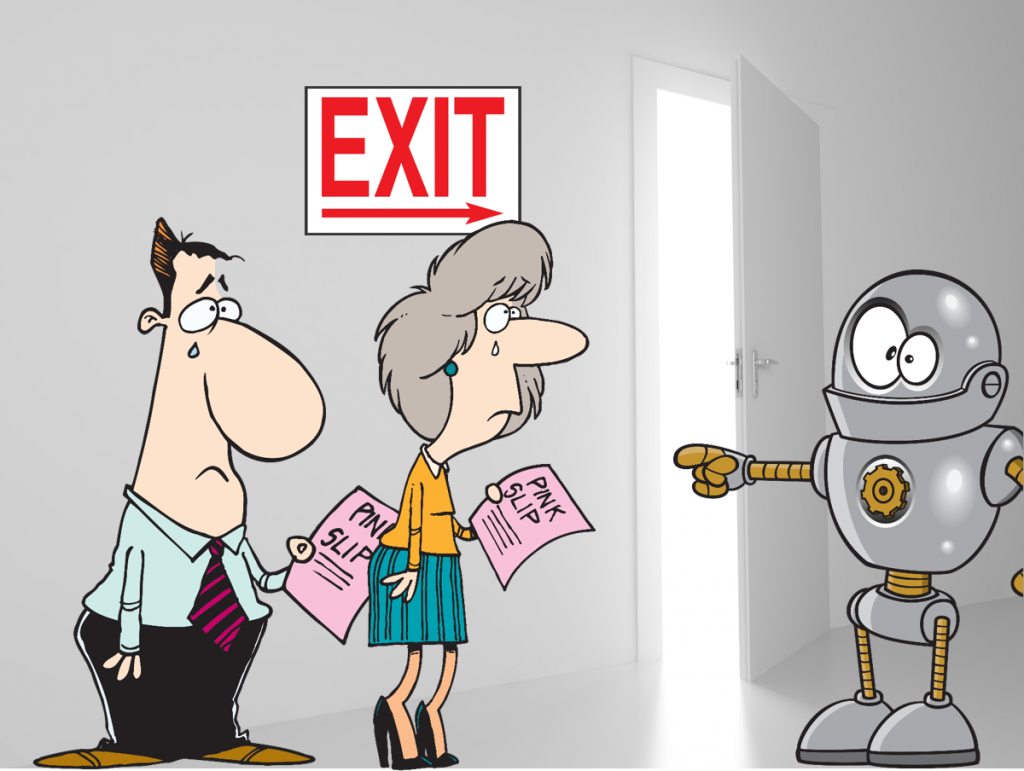 In Part 1 of this article, I laid out the stark choices that lie before us — stay on a course that leads to greater automation and increased unemployment or find a way to make human/machine collaboration work in a way that benefits everyone. If we proceed on the first course, the logical conclusion will be social unrest and economic collapse. We will never get on the right road if stakeholders (i.e., business people, labor leaders, government officials, academics, and think tank experts) engage in short-term thinking without ever pondering long-term effects. I recently read either a headline or a tweet that noted that long-term thinking does not emerge by combining a bunch of short-term decisions. Unfortunately, we live in a world where a CEO’s tenure is too often based on short-term results. This will inevitably lead to more automation with the end goal being improved efficiency and greater profits without regard to human consequences. Don’t misunderstand me, there is nothing wrong with greater efficiency or profits — after all, I’m a businessman. I’m also savvy enough to know that if there are mass layoffs there won’t be anyone left to buy products and/or services that lead to profits. In the end, short-term thinking leads to a long-term lose/lose scenario. A picture of that grim scenario is painted in Martin Ford’s (@MFordFuture) book Rise of the Robots: Technology and the Threat of a Jobless Future. The introduction to his book states, “Unless we begin to radically reassess the fundamentals of how our economy works, we could have both an enormous population of the unemployed-the truck drivers, warehouse workers, cooks, lawyers, doctors, teachers, programmers, and many, many more, whose labors have been rendered superfluous by automated and intelligent machines — and a general economy that, bereft of consumers, implodes under the weight of its own contradictions.”

New York Times‘ reporter, John Markoff (@markoff), writes, “The emerging new information economy has created a Rashomon moment.”[1] For those unfamiliar with that reference, the Rashomon effect involves contradictory interpretations of the same event by different people. The phrase has reference to the film Rashomon, in which the accounts of the witnesses, suspects, and victims of a rape and murder are all different. Markoff explains, “On one side are computer scientists like Moshe Vardi at Rice University who argue that machine intelligence is evolving so rapidly that virtually all human labor will be within the reach of robots and artificial intelligence software in just three decades. On the other side, the International Federation of Robotics argues that manufacturing robotics will be a dramatic job generator, spinning off jobs by creating immense new economic activity.” Only conscious effort will take us down one path or the other. I agree with Ford who observes, “We are at an inflection point — do we continue to listen to those who argue that nothing fundamental has changed, and take a bad bet on a miserable future, or do we begin to discuss what we must do to ensure all of us, and not just the few, benefit from the awesome power of artificial intelligence?” This article is intended to further the discussion so that the world can make the right choices in the years ahead. If Vardi is correct, we have less than three decades to get things right.

As I pointed out in the first part of this article, some jobs are inevitably going to be lost to artificial intelligence systems and robotics. The jobs certain to be lost to automation are going to involve work that is repetitive or a drudgery for humans. The obvious result of this will be that people at the bottom of the economic pyramid are going to be affected first. That means that economic inequality could increase before things get better — if they get better. Jerry Kaplan, author of Humans Need Not Apply, told Gregg Greenberg (@5GsOnTheStreet), “If you are one of the people who owns the robots, then things are going to be great because you are the owner of that automation. If you are the person whose job is being lost because the robot is doing the task that you used to do, then that’s a major problem.”[2] Markoff, however, takes the same view of things that I do. The future is in our hands. He elaborates:

“Whichever account is correct, disruption and destruction are possible as Internet-enabled software systems and dexterous mobile machines become commonplace in the workplace, classrooms, factories, hospitals, and assisted living facilities. But the challenge presented by the new wave of artificial intelligence is an opportunity to remind ourselves that the future economy will be designed by humans. Nothing is inevitable, and indeed the designers of next-generation industrial machines and software have an unparalleled opportunity to design humans into, or out of, the systems they create.”

I’m in the fortunate position of being President and CEO of a company that designs cognitive computing solutions for businesses; which means that I can directly influence whether or not our solutions are designed to replace or work with humans. Admittedly, our solutions are designed to create greater efficiency and, in doing so, they can eliminate some positions. To date, however, our solutions have all been designed to work with rather than replace humans. It has been a conscious decision based on my belief that job sustainability is going to be one of the critical issues of our time. Kaplan states the immediate problem pretty succinctly, “Employees with jobs based upon simple manipulation should consider upgrading their skills, lest they lose their positions to robots. On the other hand, … people who work in positions which require interpersonal relations can feel secure in their jobs for a long time to come.” David Hummels, a professor of economics at Purdue University, agrees with Kaplan because he believes humans still have a unique advantage that machines may never be able to emulate: our ability to respond to other humans. “We have evolved over 100,000 years to be exquisitely perceptive to visual and aural cues from other people around us,” Hummels states, “which is an important skill that machines may never be able to match.”[3] People who love dealing with people will always have a role to play. Kaplan asserts, “The jobs that are least vulnerable to automation tend to be held by women.”[4]

But, as we all know, not everybody loves dealing with people. Does that mean the future is bleak for individuals not suited to the service industry? Not necessarily. The U.S. Department of Labor believes that 65% of today’s grade school kids will end up in a job that doesn’t yet exist. Most of those jobs are going to be created as a direct result of the rise of artificial intelligence and robotics. They will be jobs that require both expertise and skill, which is why there is such a push for developing STEM (science, technology, engineering, and math) skills. Businesses will have a major role to play as they collaborate with schools to define the kinds of skills they need in a new employee. Research by Gartner analysts “suggests that machines and systems can only benefit from a better understanding of human context, humans, and human emotion. This understanding leads to simple context-aware interactions, such as displaying an operational report for the location closest to the user; to better understanding customers, such as gauging consumer sentiment for a new product line by analyzing Facebook postings; to complex dialoguing with customers, such as virtual assistants using natural language question and answering (NLQA) to interact on customer inquiries. NLQA is one of the technologies on Gartner’s Hype Cycle that represent these capabilities.”[5] The systems that do this best are cognitive computing systems, like the Enterra Enterprise Cognitive System™, because it uses both advanced mathematics and semantic reasoning.

As we sit on the cusp of an unprecedented industrial revolution, Markoff reminds us that early pioneers saw this day coming. “At the very dawn of the computer era, in the middle of the last century,” he writes, “Norbert Wiener, the MIT mathematician whose book Cybernetics touched off the first debate about machines, robots, and the future of work, issued a warning about the potential of automation: ‘We can be humble and live a good life with the aid of the machines,’ he wrote, ‘or we can be arrogant and die.’ It is still a fair warning.” Let’s hope our humility triumphs over our arrogance and we make decisions that take us down the path of human/machine collaboration.