Traditionally, Thanksgiving Day has marked the beginning of the holiday shopping season — not any more. In many stores, Christmas decorations were going up and holiday products were going on sale after Halloween. In addition, many stores opted to open for business this Thanksgiving Day. If these trends continue, Thanksgiving Day could lose some of its significance. Such a result would be unfortunate. For over two centuries, Americans have paused in the fall to give thanks for the bounties of the earth and enjoy the fruits of their labor. Thanksgiving is a time for family gatherings, great food, and football. According to a History Channel article about Thanksgiving, Americans owe the national holiday to a magazine editor:

“In 1827, the noted magazine editor and prolific writer Sarah Josepha Hale — author, among countless other things, of the nursery rhyme ‘Mary Had a Little Lamb’ — launched a campaign to establish Thanksgiving as a national holiday. For 36 years, she published numerous editorials and sent scores of letters to governors, senators, presidents and other politicians. Abraham Lincoln finally heeded her request in 1863, at the height of the Civil War, in a proclamation entreating all Americans to ask God to ‘commend to his tender care all those who have become widows, orphans, mourners or sufferers in the lamentable civil strife’ and to ‘heal the wounds of the nation.’ He scheduled Thanksgiving for the final Thursday in November, and it was celebrated on that day every year until 1939, when Franklin D. Roosevelt moved the holiday up a week in an attempt to spur retail sales during the Great Depression. Roosevelt’s plan, known derisively as Franksgiving, was met with passionate opposition, and in 1941 the president reluctantly signed a bill making Thanksgiving the fourth Thursday in November.”

John Koetsier reminds us that this will be the “shortest Thanksgiving-Christmas shopping season since 2002.” Since most stores began their promotions after Halloween, this really doesn’t mean very much; especially since sales were brisker than expected. Koetsier also reports, “It promises to deliver record earnings.” His assertion is drawn from Adobe analysis. [“Adobe forecasts record holiday sales: $1.1B Thanksgiving, $1.6B Black Friday, $2.3B Cyber Monday,” Venture Beat, 5 November 2013] Koetsier explains:

“Based on an exhaustive analysis of 450 billion retail website visits over the past seven years, and direct insight into 72 percent of all the cash flowing into the 500 largest retail websites in the U.S., Adobe is forecasting the biggest Thanksgiving, the biggest Black Friday, and the biggest Cyber Monday in history.”

If that is true, retailers will certainly find a lot to be thankful for this year. Unfortunately, for many of their employees, there won’t be much of an opportunity to pause and be thankful. Rick Newman reports that Thanksgiving Day is now being called Stealthy Thursday. [“New Thanksgiving Tradition: Never Stop Shopping,” Yahoo, 5 November 2013] He explains:

“Stealthy Thursday … could end up displacing Black Friday as the most-watched shopping day of the year. That’s right. Thanksgiving Day. Last year, Americans spent about $600 million online on Thanksgiving Day, since most stores weren’t open. No retailer can ever cede a dollar of sales to a competitor, so this year, Wal-Mart, Target, Macy’s, J.C. Penney, Kohl’s and many other stores will open on Thanksgiving night around 8 pm to try to corral their share of the Thanksgiving Day shopping budget. Struggling Kmart, desperate for any edge, will open at 6 am on Thanksgiving Day and remain open through Black Friday at 11 pm, sort of a test of how eager people really are to ditch their families on a holiday and find anything else to do. Anything.”

Needless to say, K-Mart’s decision stirred a bit controversy. Even if you have to work, I hope you find some time this Thanksgiving Day to be with family, to enjoy a good meal, and to offer some thanks. I know I’m thankful for my family, my friends, and those with whom I work. From all of us at Enterra Solutions®, Happy Thanksgiving. 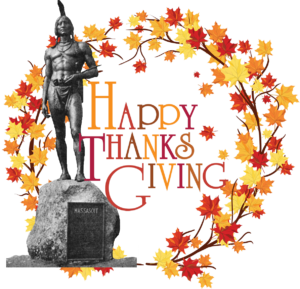