Today’s post was written by Carol Wilson, a guest blogger, professional writer, and business owner who frequently freelances for www.businessinsurance.org. Carol likes to write about finance, technology, and business software. A year ago I noted that healthcare provider WellPoint announced that it was hiring IBM to provide its Watson technology as diagnostic tool. This was “the first time the high-profile project will result in a commercial application.” [“WellPoint’s New Hire. What Is Watson?” by Anna Wilde Mathews, Wall Street Journal, 12 September 2011] Carol’s post is a good update to that announcement. She writes:

You might remember Watson, the genius computer developed by IBM that beat Jeopardy’s greatest all-stars in a special Jeopardy match to test the computer’s abilities last year. Well, Watson’s still around, and IBM executives say this supercomputer is going to be making waves in the business world over the next few years.

Watson isn’t just good at answering trivia questions. It’s also incredibly adept at collecting data and communicating pertinent information regarding analytics. Right now, Wellpoint is working with IBM to teach Watson to help oncologists diagnose patients. Once IBM and Wellpoint work out all of the kinks, doctors will theoretically be able to tell Watson their patients’ medical histories and symptoms, and Watson will be able to scour the large amount of data it stores and spit out a diagnosis and treatment options.

Just as Watson was able to learn everything necessary to win a Jeopardy game, the computer should be able to learn everything necessary to help doctors diagnose and treat patients. Unfortunately, IBM programmers have to spend a considerable amount of time feeding data to Watson and asking it questions about that data before it will be ready to work alongside physicians.

As IBM makes strides and breaks ground with Watson in the medical field, the top tech company also has exciting plans to use Watson to revolutionize business analytics. According to sources at IBM, the company is currently creating a Watson app for smartphones and tablets that will ultimately help business owners make critical decisions by analyzing a vast sea of pertinent business data for them.

Watson will essentially be a business analytics genius right in the palm of your hand. The app will be connected to tons and tons of business data from various industries, and you’ll be able to ask it questions about that data that are relevant to your business. Watson has the potential to make things like supply chain management and business forecasting substantially easier and more effective for business owners. It can process around a million books worth of information in just one second and provide thorough, clear answers based on the large quantities of information it processes.

Before we all get too excited about a Watson smartphone app, it’s good to keep in mind that no one’s really quite sure of how IBM’s going to pull this app off. Right now, Watson is composed of several servers that take up a lot of space and use a lot of energy. It will cost IBM a lot of money to run, maintain, and monitor enough severs for the Watson app to work on a large-scale. And it could take programmers years to feed Watson the necessary amount of business data. This could mean that a Watson app won’t be on the market for a while, and it could mean that the app won’t be a very affordable or reasonable option for many businesses.

Still, according to some sources, IBM plans to use Watson as an overall part of how they’ll increase their earnings from business analytics technology by $16 billion over the next three years. So, a Watson app seems to be imminent, if IBM is able to stay on target with their goals.

If and when Watson enters the smartphone realm, it will be, in many ways, a supercharged, highly intelligent Siri for business owners. You’ll be able to ask Watson a question, and it’ll retort back with an answer just as Siri does, except its answers will be much more impressive and insightful.

It will certainly be exciting to see what IBM does with Watson over the next few years. If they figure out how to cut the costs associated with developing a Watson app, it’s safe to assume that it will become one of the most powerful and important apps on the market, specifically for business analytics purposes.

Please send your comments, questions, and writing requests for Carol to Wilson.carol24@gmail.com.

As Carol points out in her post, it takes time for Watson become adept in specific field of learning. Sarah Frier reports  that, even though “Watson’s deal with WellPoint was announced in September of last year, … the system won’t master the field of oncology until at least late 2013.” [“IBM Envisions Watson as Supercharged Siri for Businesses,” Bloomberg, 28 August 2012] Still I’m sure it will become a welcomed aid for oncologists.

As I noted in a previous post [The “Big Data” Dialogues, Part 4], the IBM approach is not the only “big data” approach that can or should be used. Humans provide answers to questions on two levels. For example, if you ask someone, “What color is the sky,” they will quickly answer “blue” without much thought. That is what Watson does (but Watson’s intuitive, or short-term, recall is massive). It’s a great capability and it has its place in supply chain analytics. But humans are also asked to answer questions that require them to think harder, dig deeper, and tap relationship that aren’t always obvious. Watson can’t do that. Enterra Solutions uses another approach (one that involves a unique and carefully constructed ontology). An ontology deals with how entities can be grouped, related within a hierarchy, and subdivided according to similarities and differences. The following graphic (a depiction of Cycorp’s Cyc Knowledge Base) shows how intricate and nuanced these relationships can be. 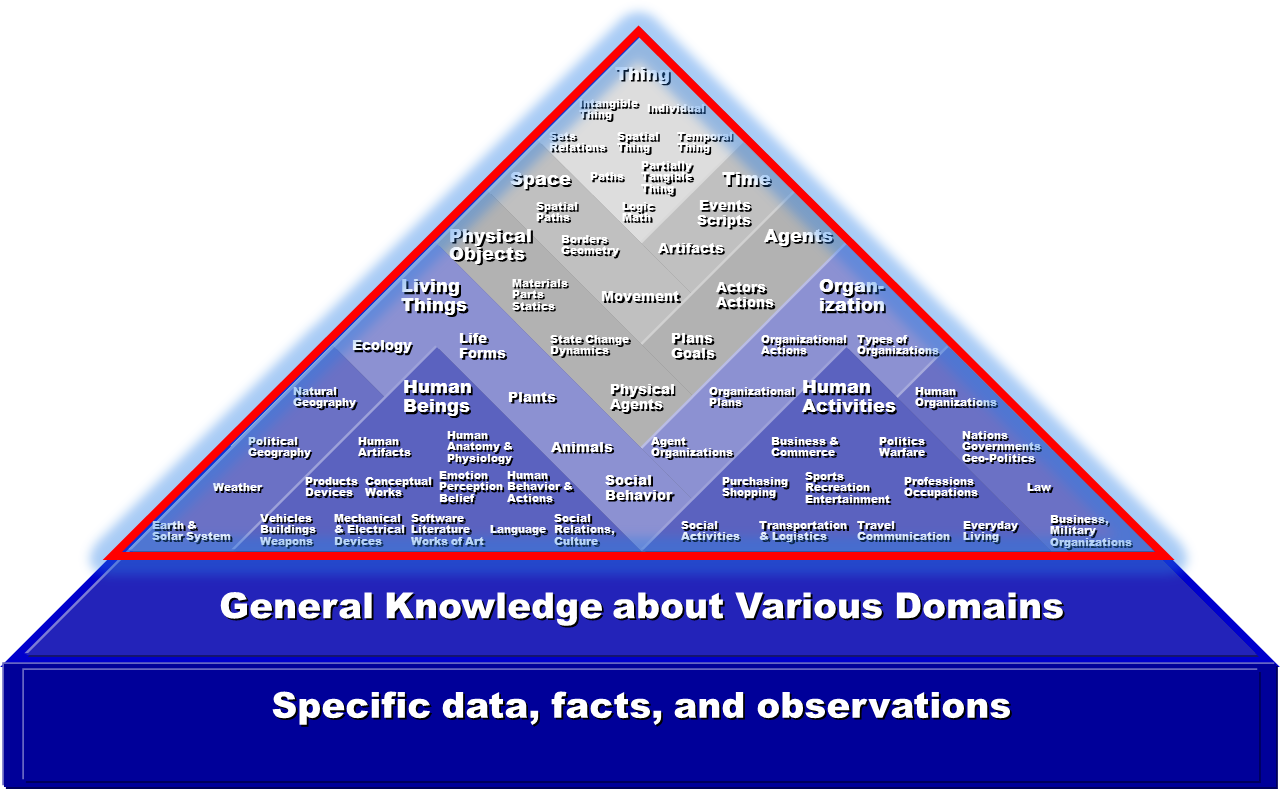 The benefits of using an ontology include: Sharing common understanding of the structure of information; enabling reuse of domain knowledge; making domain assumptions explicit; separating domain knowledge from the operational knowledge; and analyzing domain knowledge. Together IBM’s approach and Enterra’s approach more closely replicate human thought processes, but on a massive level. IBM’s technology is great for short-term recall and, when that is insufficient, Enterra’s ontology approach provides more nuanced, analysis along the lines of long-term recall and relational thought processes. Each approach has its strengths and both approaches are capable of dealing with big data.