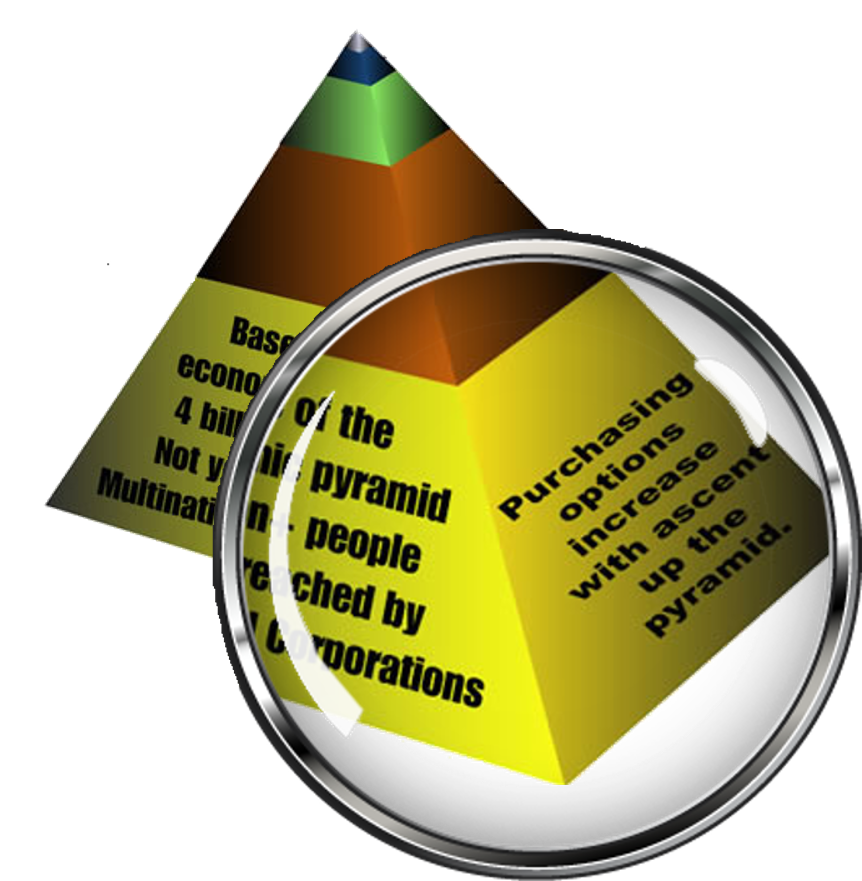 Business people understand that increasing the bottom line requires customers; and, for most businesses, those customers are going to be found among the middle and lower economic classes (i.e., the classes in which the vast majority of the global population find themselves). The more disposable income people in those classes have the better their quality of life and, for the business sector, the better sales are likely to be. One reason that the global economy has demonstrated relatively steady growth is that globalization has helped bring millions of people out of poverty and into the middle class. Transnational corporations look enviously at the billions of potential customers living in emerging and frontier markets and they are trying to figure out how they can tap into those markets. Boston Consulting Group (BCG) analysts, Douglas Beal (@beal_douglas), Enrique Rueda-Sabater, and Shu Ling Heng, believe that one way of ensuring that people in the middle and lower economic classes continue to advance is to focus on well-being rather than GDP.[1] They assert, “Government leaders increasingly speak of boosting the well-being of citizens — rather than bolstering GDP growth — as their primary mission.” That’s also a goal that the business world would do well to promote.

Beal, Rueda-Sabater, and Heng believe “the conventional yardsticks of per capita GDP and growth are too narrow to evaluate the full measure of well-being. What’s needed is a broad diagnostic tool designed specifically to help governments set priorities and formulate development strategies.” To that end, they developed BCG’s Sustainable Economic Development Assessment (SEDA), “a comprehensive diagnostic tool based on objective data, for just that purpose.” Focusing on improving citizen “well-being” may sound like a “touchy-feely” approach to development, but “SEDA’s design reflects the need of governments to pursue a balanced approach to raising the overall well-being of their citizens — one that is focused on economics, critical investments, and the social and environmental factors that ensure sustainability of progress over time.” This holistic approach to development is shown in the following graphic. Note that ten measured dimensions fall into three broad categories (or elements): Economics, Investments, and Sustainability. 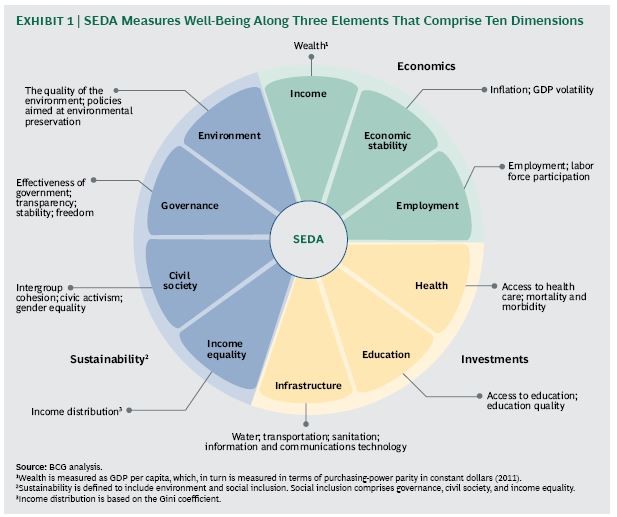 It should be apparent to business leaders that this type of development approach is not only good for citizens it’s good for business. Implemented correctly, programs and policies that support this holistic approach help improve the quality of the workforce, improve connectivity, and increase income. Combined, those areas ensure a better business environment. Although it is convenient to discuss broad economic classes (like middle and lower classes), the strategies for dealing with various segments of those classes are very different. The most difficult business environment is found at the base of the economic pyramid.

Lina Salazar Ortegón, who works at the Inter-American Development Bank, asserts, “There aren’t one-size-fits-all recipes for successfully serving those at the base of the pyramid (BoP).”[2] Some of the poor are living in urban slums while other impoverished people are found in remote rural locations. Obviously, the strategies for dealing with urban and rural consumers are different. Nevertheless, Ortegón claims, “There are some basic principles that can help companies and entrepreneurs to understand the financial and social returns at the BoP.” Because it explains why businesses should consider serving the base of the pyramid in the first place, the last principle Ortegón discusses should probably be the first. She writes:

“C.K. Prahalad, father of the term base of the pyramid, wrote that the BoP is not a ‘market that allows for the traditional pursuit of margins; instead, profits are driven by volume and capital efficiency. Margins are likely to be low, but unit sales can be extremely high.’ It is critical that BoP business models have massive impact or have the potential to be scalable.”

The first principle she discusses is: Don’t start from Scratch. Leverage existing capabilities. People in the BoP are resilient. They have to be. Companies need to understand how people living in poverty are currently obtaining goods and services and they need to connect with those supply lines. To learn how Barefoot Power, a company that specifically targets the BoP market, has managed to succeed, read my article entitled “Addressing Challenges at the Bottom of the Pyramid.” Ortegón’s next principle involves creativity against risk. She explains:

“Serving a low-income market segment requires entrepreneurial spirit and managerial willingness to innovate. Since innovating is equivalent to making mistakes, entering BOP markets demands patience. While it is impossible to eliminate risk, it can be minimised by sharing, or outsourcing it, or establishing alliances with other organisations that have the know-how or intelligence that the company lacks.”

She next talks about the importance of alliances. She writes, “The best approach for meeting and overcoming obstacles to implementing business models at the BoP is establishing strategic and complementary partnerships.” The next principle she emphasizes deals with understanding. She recommends that companies involve themselves with more observation and less assumptions. “This segment is like any other commercial target,” she writes. “Behavioral economics and ethnography are useful tools for understanding behaviors and decision-making patterns in BoP markets.” Big data analytics can help companies better understand the differences between neighborhoods so that the right product, in the right quantity, is made available in the right place. That kind of granular knowledge is important, Ortegón explains, because it’s not just about low prices. “For low-income communities, a cheap product or service may not be enough of an incentive to make a purchase. It is imperative that they feel they are getting the best quality for their money. Building a relationship of trust with consumers and minimising the perception of risk is crucial.” If a company does its homework, it will learn that the BoP market is not a monolithic block. “Family income and the budget available for discretionary expenses determine how low-income consumers prioritize their spending and give hints on the factors (i.e., risk, price, a simple social aspiration, etc.) that influence their purchasing decisions.”

Ortegón next explains that the BoP is not static. As noted above, globalization has helped bring millions of people out of poverty and many governments and businesses are working together to help more millions join the middle class. “As a result,” Ortegón writes, “millions of low-income people are now beginning to prioritise their spending on education and health.” If you’re wondering where companies are going to obtain the necessary data to gain insights about the BoP, Ortegón reminds us that a large number of people at the base of the pyramid either own or have access to mobile phones. There is power in connectivity. Ortegón explains, “The combination of broadband access and smartphones or tablets could trigger hundreds of applications related to healthcare, financial services and agriculture.”

In addition to partnering with governments to serve consumers at the base of the pyramid, Josephine Korijn (@JKorijn) reports, “The worlds of business and charity are increasingly merging.”[3] New business models known as social enterprises are increasingly found in impoverished areas doing good while conducting business. Even some large corporations have spun off their own social enterprises to serve the BoP. For example, Novartis has established an organization called Arogya Parivar, which means “Healthy Family” in Hindi. More of this activity is required. Beal, Rueda-Sabater, and Heng conclude, “Prosperity — the well-being of an entire population — is an ambitious goal that most nations pursue more or less explicitly. While many countries at the middle levels of our well-being measure are making good progress, our analysis has raised a significant flag of concern for the plight of low-income countries that have low current levels of well-being.” By applying the principles discussed by Ortegón, companies can extend their reach to the bottom of the economic pyramid and, as a result, have a significant impact on both the population and the company’s bottom line.