Home » Business » Globalization is Moving Along Some New Roads 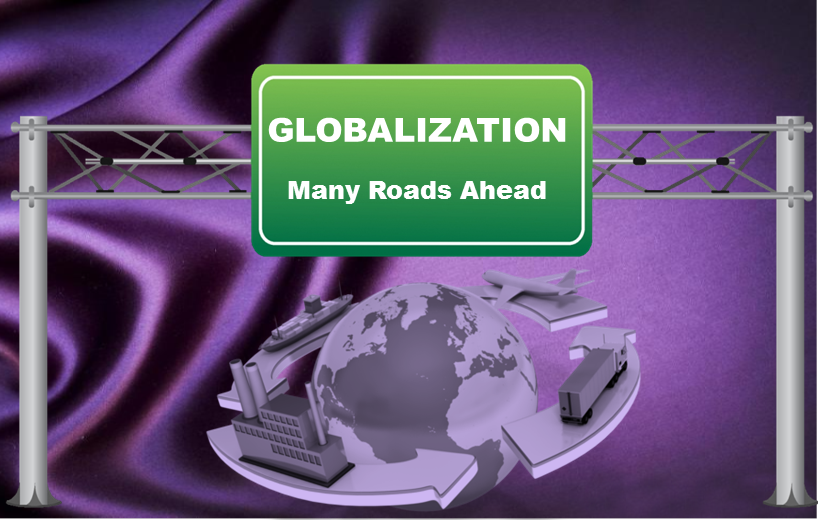 Globalization is Moving Along Some New Roads

“A huge shift in trade and relations could be underway across Eurasia,” writes Douglas Bulloch (@douglasbulloch), “and China’s New Silk Road policy is at the heart of it.”[1] According to Jim Tompkins (@jimtompkins), CEO of Tompkins International, and Michael Zakkour (@michaelzakkour), a Principal at Tompkins International, the New Silk Road may be just one of several roads along which globalization will travel in the years ahead.[2] A quick look at each of these roads, starting with the New Silk Road, will help manufacturers and retailers better understand how globalization is changing (i.e., Globalization 2.0).

Bulloch writes, “As a historical reference point, the Silk Road continues to resonate, long after the trade route served any economic purpose.” The historical Silk Road reminds us that global trade was thriving centuries before the term “globalization” came into fashion. The staff at The Strategic Sourcerer writes, “The Silk Road was once a series of lucrative waterways and trade routes connecting the West with the East, the old with the new, the exotic with the domestic. Over millennia and 4,000 miles of land and sea, the trade market underwent a revolution and gave rise to the intercultural world we know and are familiar with today.”[3] Since the Silk Road is such a powerful icon of global trade, it probably shouldn’t have come as a surprise when, back in 2013, China’s President Xi Jinping proposed a new Silk Road initiative. The new initiative is not just idle talk, “China plans a $16.3 billion fund to finance construction of infrastructure linking its markets to three continents as President Xi Jinping pushes forward with his plans to revive the centuries-old Silk Road trading route.”[4] The Strategic Sourcerer staff elaborates:

“China’s plan for a new trade route that mimics the Silk Road of old would extend across all of China and Asia and reach as far West as Greece, noted the International Business Times. President Xi is hoping that more countries from the West will want to join in on the action and participate in the $50 billion project that is being funded by the Asian Infrastructure Investment Bank. This co-op, in direct competition with the World Bank that Washington, D.C. helps control, would provide funding for infrastructure for countries in need of repair. With the massive over-reaching arm of the trade route and the AIIB (and the support of countries such as Russia, Denmark and Australia, reported IBT), many are concerned about the amount of power China is trying to amass under the guise of cross-country friendship.”

For several years, I’ve pressed the point that the future of globalization involves greater regionalization of trade. Regionalization is one reason that many manufacturers are changing their production strategies to include factories in vital regions in order to shorten supply chains and improve response time. The New Silk Road strategy also reminds us that China still sees itself as the center of the world and wants to strengthen trading relationships in order to ensure that vision endures. The Strategic Sourcerer staff concludes, “At the very least, it would seem that the Silk Road initiative will have a strong impact on the supply chain as we know it. What changes will arise should President Xi’s plan become a reality? That remains to be seen, but let’s hope for a transition as smooth as silk itself.” The New Silk Road is both a physical and a conceptual initiative. The new “roads” proposed by Tompkins and Zakkour are more conceptual in nature.

Tompkins and Zakkour describe four additional “roads” they see emerging in the years ahead that will define Globalization 2.0. Just as importantly, they insist that these new roads will function according to new rules. They explain:

“Globalization 1.0 was born in the 80’s, matured in the 90’s and peaked in the early 2000’s. The era was marked by ‘made in Asia,’ the growth of the BRIC economies, wealth residing in the West, the birth of the Internet and the maturation of local, regional and global supply chains. More importantly the era gave birth to three MEGATRENDS, the rise of China first as a manufacturing hub and then as a market, the exponential growth of e-commerce and the development of the advanced globally integrated supply chains. It was a great time to be a retailer as cheap goods from Asia, hyper-consumption in the US and the new markets opening = rapid expansion and big profits. All of that is over now. Retail has experienced major disruptions over the last five years. These mega-trends have melded together to form a single new MEGATREND — Globalization 2.0 — and this has completely changed how retailers and brands must operate and how they must approach making, moving and selling consumer products. Globalization 2.0 has largely shattered close to 100 years of retail and consumer product manufacturing, operations, sales, marketing and supply chain structures, closing down the old routes to growth and profit while opening new ones. Not everyone understands or has accepted that the rules of the road have changed. If you are a retailer or consumer product brand Globalization 2.0 means you not only CAN but MUST be able to ‘make/buy it’ anywhere, ‘move it’ anywhere, and ‘sell it’ anywhere.”

They insist that “Amazon and Alibaba are changing the face of global retail” and that “brands have four new roads they must follow in order to grow and be profitable.”

According to Tompkins and Zakkour, companies must answer three questions if they are going to travel this road successfully. Those questions are:

The reasons the answers to these questions are so important, they insist, is because “wealth has shifted to the East. Emerging markets have become linchpins of consumer culture. Advantages and disadvantages of low cost country manufacturing are shifting faster than they used to. Supply chain strategy, product agility and visibility have become critical to success.”

Tompkins and Zakkour point out what most manufacturers and retailers have known for years — namely, developed markets are saturated and the greatest potential for growth lies in emerging markets. They explain:

“The toll taken by a ‘race to the bottom’ on pricing, influenced by e-commerce, means that, with the exception of luxury and mass market products, the old economic rules no longer apply and profit margins are narrow or non-existent. Europe is in bad shape and getting worse causing US and global companies to retreat. The first road to take for retail and brand growth is expansion into developing markets, in particular China. China is now home to the fastest growing and largest consumer class in the world.”

The growing global middle class is certainly worth pursuing but so are consumers at the bottom of the economic pyramid. The rub, of course, is that what and how you market to these two classes of consumers is different. The supply chains that serve them are also different. Nevertheless, they represent the future and I agree with Tompkins and Zakkour that companies that ignore them are going to take a side road to failure.

Road 3. Omnichannel and the Digital Path to Purchase

By suggesting that manufacturers and retailers must pursue global consumers, Tompkins and Zakkour aren’t implying that they should ignore domestic markets. They know that “retailers and brands must expand domestically and internationally in order to grow.” In the information age, they suggest that manufacturers and retailers must embrace the digital path to purchase (DP2P). “Growth domestically and internationally lies in transitioning into Omnichannel sales,” they write. “Omnichannel is the ability to present a brand, a product, an experience and to facilitate frictionless sales and returns across all channels. Growth will also come from embracing the future that is borderless e-commerce.”

In a “make it, buy it, move it and sell it anywhere” world, the importance of global supply chains should be clear. Tompkins and Zakkour write, “During Globalization 1.0 the supply chain was simply understood as making, moving and storing products: a necessary if little understood business function. Globalization 2.0 now mastering the six mega-processes of the supply chain (MAKE-BUY-MOVE-DISTRIBUTE-STORE-SELL) is essential. Understanding the supply chain often makes the difference for retailers and brands between profits or losses and between thriving or dying.” The go on to warn, “In this environment companies that are using legacy 1.0 world supply chain networks will not be able to keep up with competitors who have shifted to a 2.0 world supply chain network.”

Globalization is not dead; but it is certainly changing. And manufacturers and retailers must change along with it. Tompkins and Zakkour conclude, “The companies that will survive in Globalization 2.0 will embrace a new framework for operations and strategy, expand internationally and shift to an Omnichannel/borderless e-commerce channel strategy.” In order to reduce the complexity of global supply chains in this new era, I recommend segmenting supply chains regionally so that they can be tailored and respond better to the markets they serve. There are likely to be other roads emerge that companies are going to have to travel to be successful in the future. Successful companies will keep looking for the road signs.