With energy prices continuing to skyrocket and concerns about climate change grabbing headlines and Nobel Peace prizes, you would think that potential breakthroughs in alternative energy technologies would get more notice. According to an article in The Economist [“End of a dammed nuisance,” 8 March 2008 print edition], “A new generation of free-standing turbines promises to liberate hydroelectric power from its dependence on dams.” That’s good news for both developed and developing countries.

“Even in today’s more environmentally conscious times, hydroelectric dams are often unwelcome. Although the power they generate is renewable and appears not to produce greenhouse-gas emissions, there are lots of bad things about them. Blocking a river with a dam blocks the movement both of fish upstream to spawn and of silt downstream to fertilise fields. The vegetation overwhelmed by the rising waters decays to form methane—a far worse greenhouse gas than carbon dioxide. The capital cost is huge. And people are often displaced to make way for the new lake. The question, therefore, is whether there is a way to get the advantages of hydropower without the drawbacks. And the answer is that there may be.”

China’s Three Gorges Dam is an interesting case to look at when discussing the benefits and drawbacks of building dams to generate hydroelectric power. When completed and in full operation, the dam is expected to generate nearly 85 billion kilowatt hours of electricity. That energy is equivalent to burning 50 million tons of coal or 25 million tons of crude oil.  It will annually keep 100 million tons of carbon dioxide, nearly two million tons of sulfur dioxide, ten thousand tons of carbon monoxide, 370, 0000 tons of nitrogen oxide and 150,000 tons of dust out of the atmosphere.  The cost savings (even before oil and coal prices started to rise dramatically) were estimated to equal the costs of the project within three years of full operation.  Additionally, the availability of all that power was expected to create millions of desperately needed jobs. That’s the up side. The down side includes the fact that hundreds of factories (built on land that has been covered by the lake created by the dam) either closed permanently or had to be rebuilt elsewhere. Over a million people had to be relocated and hundreds of towns, some historically significant, were buried under water. Additionally, nearly 31,000 hectares of farmland was lost to the reservoir in a country already suffering from a severe shortage of arable land. [see TED Case Studies: The Grand Canal and the Three Gorges Dam: A Historical Comparison]

Wouldn’t it be grand, innovators thought, if one could achieve the benefits of hydroelectric power without the drawbacks of having to build a dam and create an artificial lake.

“The purpose of a dam is twofold: to house the turbines that create the electricity and to provide a sufficient head of water pressure to drive them efficiently. If it were possible to develop a turbine that did not need such a water-head to operate, and that could sit in the riverbed, then a dam would be unnecessary. Such turbines could also be put in places that could not be dammed—the bottom of the sea, for example. And that is what is starting to happen, with the deployment of free-standing underwater turbines.”

Sounds too good to be true doesn’t it. Well, in some ways it is.

“The big disadvantage of free-standing turbines is that they are less efficient than turbines in dams at turning the kinetic energy of moving water into electricity. They are also subject to more wear and tear than turbines protected by huge amounts of concrete. They can be hard to reach for repairs and maintenance. And their generators, being electrical machines, must be protected from the water that surrounds the rest of the turbine. A discouraging list. But in the past three decades computing power has became cheaper, helping developers to simulate the behaviour of water and turbine blades—something that is hard to do with paper, pen and formulas. Moreover, prototypes can be built directly from the computer models. All this has helped scientists and industry to solve the inherent problems of free-standing turbines.”

The article then goes on to describe three different models of free-standing turbines that are getting attention. Each tackles the problems mentioned above in a slightly different way. 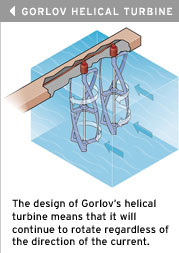 “The first new design was by Alexander Gorlov, a Russian civil engineer who worked on the Aswan High Dam in Egypt. He later moved to America where, with the financial assistance of the Department of Energy, he produced the first prototype of a turbine that could extract power from free-flowing currents ‘without building any dam’. The Gorlov Helical Turbine, as it is known, allows you to use any stream, whatever the direction of its flow. The vertical helical structure, which gives the device its name, provides a stability that previous designs lacked. It is also relatively efficient, extracting 35% of the energy from a stream. In addition, since the shaft is vertical, the electric generator can be installed at the top, above the water—so there is no need for any waterproof boxes. In 2001 Mr Gorlov won the Edison patent award for his invention, and his turbines have now been commercialised by Lucid Energy Technologies, an American company. They are being tested in pilot projects in both South Korea and North America.”

Output, of course, depends on the size of the turbine and the amount of potential energy in the “stream.” Normally, one doesn’t think of “streams” as having much potential — one thinks of fast-flowing “rivers.” For small villages situated along “streams,” a few of these turbines might produce enough energy to satisfy their needs. At least that is the implication I get from the article’s use of the word “stream.”

A second design is by Philippe Vauthier, another immigrant to America, who was originally a Swiss jeweller. The turbines made by his company, UEK, are anchored on a submerged platform. They are able to align themselves in the current like windsocks at an aerodrome, so that they find the best position for power generation. Being easy to install and maintain, they are being used in remote areas of developing countries.”

UEK (which stands for Underwater Electric Kite) admits that its turbine requires a river (or ocean currents or a significant tidal flow) to generate electricity. Since it can swivel, the UEK turbine can take advantage of both ebbing and flowing tidal currents.

“Finally, a design by OpenHydro, an Irish company, is not just a new kind of turbine but also a new design of underwater electric generator. Generators (roughly speaking) consist of magnets moving relative to coils. So why not attach the magnets directly to the external, rotating parts of the turbine? The coils are then housed in an outer rim that encloses the rotating blades. And there is a large circular gap at the centre of the blades, which is safer for marine life. In addition, OpenHydro’s generators do not need lubricant, which considerably reduces the need for maintenance.”

OpenHydro’s turbines are quite large and, according to company’s web site, are designed to be deployed directly on the seabed (no mention of riverbeds). The article concludes:

“These new designs, combined with growing interest in renewable-energy technologies among investors, mean that funding is now flowing into a previously neglected field. According to New Energy Finance, a specialist consultancy, investments in companies planning to build or deploy free-standing turbines have increased from $13m in 2004 to $156m in 2007. Projects already under way include the installation by American Verdant Power of a tidal turbine in the East River in New York, and UEK, OpenHydro and Canadian Clean Current are operating pilot projects in Nova Scotia. And that, proponents of the technology believe, will just be the beginning. Soon, they hope, many more investors will be searching for treasures buried on the seabed—or, to be precise, in the water flowing just above it.”

One of the advantages of these systems is that they can be situated close to the populations or businesses they serve; dramatically cutting down on the expense of building distribution systems. This is particularly important for remote areas near fast flowing bodies of water. A quick perusal of the businesses’ web sites reveals that the industry remains in its infancy. It will be an interesting sector to watch as it matures. It also underscores the fact that science and technology remain extremely important if we are to meet current and future challenges in a responsible way. 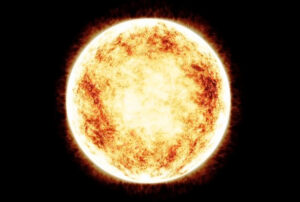