Home » Risk Management » Fraud and Theft in the Supply Chain

Fraud and Theft in the Supply Chain

Earlier this year, the Bureau Van Dijk reported, “Fraud cases around the world have seen a significant increase in the first half of 2013, with incidents totalling over half a billion pounds [i.e., over $800 billion] being recorded – an increase of 38 per cent from the same period in 2012.” [“Supply chain fraud sees huge jump in 2013,” 8 July 2013] Paul Guile reminds us, “Procurement fraud is nothing new. Samuel Pepys mentions kick-backs in his diary from the 17th century.” [“Tightening the chain on fraud,” Finance & Management, September 2012] Fraud takes all sorts of forms from kickbacks, which Guile asserts, “in the 21st century, … has the dubious distinction of being one of the highest-risk forms of commercial fraud,” to fake products. The Bureau Van Dijk article reminds us of “some of the more high-profile cases” including: “The company that sold £55 million worth of bomb detectors to the Iraqi government, which turned out to be fake. In this case, though the financial cost was huge, the real damage came from human injury and suffering. … Other incidents included the horsemeat scandal that affected the food industry in Europe and the contaminated baby milk issue in China, which led to global rationing.”

Back in 2008, Thomas Wailgum wrote, “Enterprises have discovered that their businesses are ripe for fraud and theft as they rely more and more on global outsourcing relationships, complex networks of suppliers and vast computer networks to conduct business.” [“Fraud and Theft Risks in Global Supply Chains Are Everywhere,” CIO, 30 April 2008] In his article, Wailgum cited a report from Kroll, a risk consulting company that provides investigative, security and technology services, that stated, “At every step along the supply chain, businesses are vulnerable to an array of frauds ranging from simple theft, through disguising the poor quality of materials, to the misrepresentation of inventory assets.” Because fraud takes so many forms and is ubiquitous, the Kroll report concluded, “The scale of supply chain fraud is difficult to measure and ‘too broad to estimate meaningfully’.” More recently, David M. Katz reported, “Among the different varieties of cheating, the steepest ascent was in vendor, supplier and procurement fraud, which jumped from 12 percent last year to 19 percent this year.” [“Global Supply Chains Open Door to Fraud,” CFO, 6 November 2013] Katz drew his data from the 2013 Kroll Global Fraud Report. He continued, “Other major sources of fraud cited by respondents included theft of physical assets (28 percent), information theft (22 percent) and internal financial fraud (16 percent).” Katz’ article included the following chart. 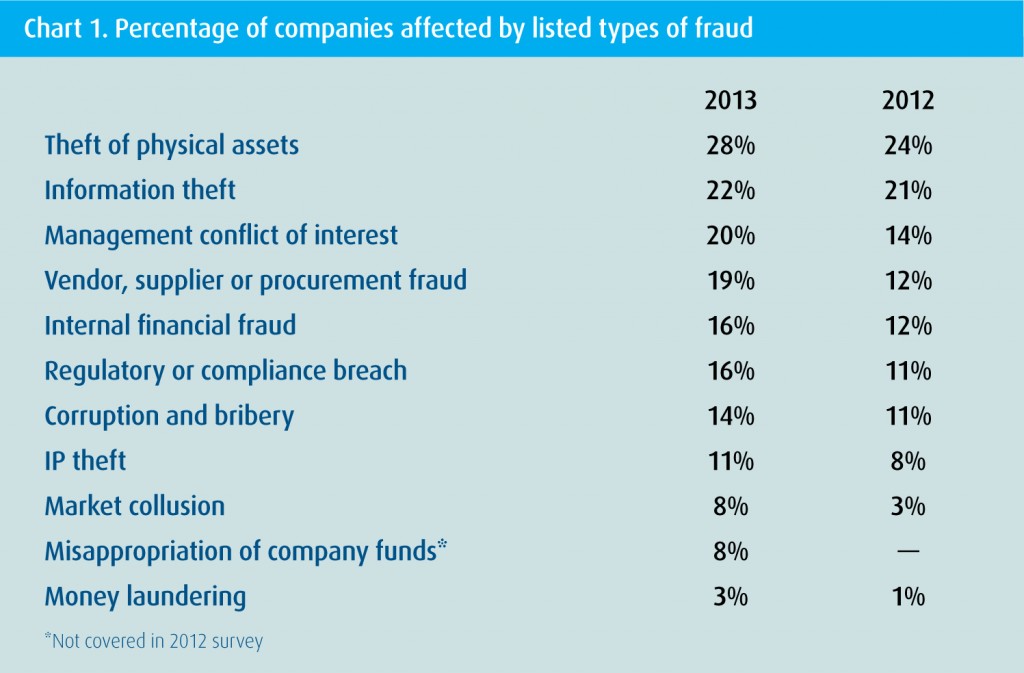 Referring to the Kroll Global Fraud Report, Paul Teague recently wrote, “The key to success is sincerity. If you can fake that, you’ve got it made. So, reportedly, said Jean Giraudoux, the late French diplomat, dramatist, and novelist. Apparently, many people have taken the advice to heart, and some of them have been causing headaches for businesses in general and procurement in particular.” [“Procurement has leading role in fraud prevention,” Procurement Leaders, 18 November 2013] Last year, in an interview with Dustin Mattison, Norman Katz, President of Katzscan Inc., asserted that there is a lot of insider fraud. “Employees and even valued consultants and valued suppliers,” he stated, “once they’re inside the protective infrastructure, … can wreak as much havoc internally as hackers can do from [the outside].” [“Supply Chain Fraud,” Dustin Mattison’s Blog, 28 December 2013] Katz told Mattison that leadership, collaboration, and Big Data analytics play a large role in helping to counter fraud. He stated:

“Governance and ethics come into play quite a bit. This definitely starts at the top and has to trickle down from executive management, who say, ‘We’re going to do the right things all through our organization.’ Auditors and risk managers may find it difficult to police an organization in trying to enforce certain types of internal controls. What I would say is that instead of trying to police an organization into risk management or internal controls, there needs to be a level of collaboration, which may not exist today in a lot of organizations between internal auditors, risk management, and the supply chain professionals that are handling technology and operations internally and externally because the same types of technologies and process improvements that can get our organizations more efficiently, more effectively, greater throughput can also be used to help detect and reduce supply chain fraud. It’s interesting that the more data we collect, the more we have an opportunity to detect fraud earlier in the supply chain or red flags that could be fraud earlier in the supply chain before they manifest themselves into something much worse. Again, this gets down to the better collection of data at all the points in the supply chain and then cross-analyzing them.”

Although Big Data analytics can help detect fraud, technology can also increase opportunities for fraud. Back in 2008, Stefano Demichelis, a senior director at Kroll, told Wailgum, “IT is part of the problem and is part of the solution. There is a risk of having so much information that it can’t be managed for proper fraud detection. The enhancement of IT has increased a thousandfold the likelihood of fraud because of the increase in the sheer number of records. ” A lot has changed since then, but, as Norman Katz noted, collaboration is critical to making a fraud prevention and detection system work. To better understand how Big Data analytics can help detect fraud, read my post entitled Illuminating (and Eliminating) Fraud using Dark Data.

Another recent study, one sponsored by Checkpoint Systems Inc., and conducted by Euromonitor International, concluded that retail “shrink is on the rise in most countries.” [“Retail ‘Shrink’ Cost the Industry 1.4 Percent of Sales Worldwide Last Year And Is on Rise,” SupplyChainBrain, 18 November 2013] Retail shrink refers to inventory losses resulting from “shoplifting, employee theft and organized retail crime.” The article concludes:

“According to Euromonitor International, ‘Shrink is a multi-dimensional threat for retailers across the globe, with shoplifting and employee theft, including organized crime, on the rise. Growing shrink concerns have put loss prevention high on the agenda of retailers; companies are keen to invest in effective and proven loss prevention methods, collaborating with technology companies and specialists for loss management solutions to diminish these shrink problems.’ ‘Some retailers still have a way to go by expanding existing loss prevention solutions providing a sure return on investment to reduce theft. Forward-looking retailers are deploying RFID-based solutions that combine protection with visibility at the item level. This type of strategic platform, combined with investments in people and processes, opens up new horizons to reduce out-of-stocks, improve merchandise availability for consumers and increase sales for the retailers,’ said Per Levin, president and chief sales officer at Checkpoint Systems.”

As is the case with electronic records, tagging systems require Big Data analytics to help ensure that all of the data obtained from RFID is made useful for decision makers and risk managers. Teague concludes that fraud prevention begins at home. He writes:

“Procurement has a special role to play in the management of the risk of fraud, particularly supplier fraud. CPOs and their staffs have to be constantly monitoring their supply bases, including the tiers 2 and below, for any signs of dishonest dealing. But the truth is, for procurement and other functions, fraud prevention and detection begin at home. The free lunches and gifts that some sales organizations offer to procurement staff can have a corrupting influence, even if it only takes the form of planting a predisposition in the mind of the buyer that favors that particular salesperson’s company. Fraud, in business or other aspects of life, isn’t going to disappear. Let’s make sure, though, that procurement continues to do its part to hold suppliers, business partners, and themselves accountable.”

Supply chain fraud and theft are not going to diminish without serious attention to the problem. Wailgum wrote, “Supply chain success and, conversely, the prevalence of fraud, have to do with control, or, in this case, 21st century enterprises’ lack of control due to the expansive and complicated nature of global supplier networks.” New technologies can help, but the human factor plays an enormous role. Good vetting of supply chain employees is an essential first step.