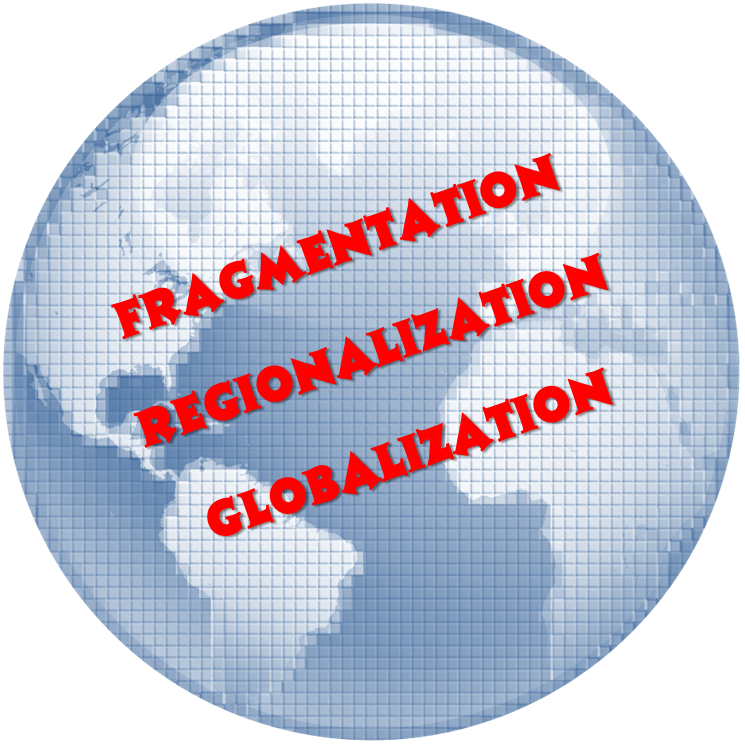 Fragmentation and Regionalization are Changing Globalization

To succeed in the world you have to understand the world. That’s a tall order since the world is in a constant state of flux. It’s one reason that analysts are always looking for trends to help gauge which direction the world is heading. Last year Financial Times‘ columnist Philip Stephens (@philipstephens) was asked by a friend, “What single word best describes the forces that have been shaping the world.” After a little consideration, Stephens responded, “Fragmentation.” And the driving force behind fragmentation, Stephens believes is “Identity.”[1] One would be hard-pressed to find arguments to counter Stephens’ worldview. For years, I have insisted that the world is becoming more regionalized; but, my reasons for believing that are probably more benign than Stephens’ reasons for choosing the word “fragmentation.” I believe that regionalization is occurring for a number of reasons; identity being only one of them. Stephens writes:

“The fragmentation dynamic reaches well beyond the murderous sectarian conflicts engulfing the Arab world. The founding assumption of the post cold war settlement was that global economic integration would drive closer political cohesion. In today’s post, post cold war order, economic and political nationalism are marching together in the opposite direction. The frontiers of globalisation are being rolled back.”

Frankly, that’s not good news for the millions of people trapped in poverty in wartorn regions like the Middle East. While fragmentation is disrupting globalization, regionalization is simply changing how it works. Regionalization means that companies are looking for natural trading partners, shortened supplied lines, and quicker reaction times as well as being able to tailor products better to local conditions and taste preferences. China is leading the regionalization movement, but domestic rather than international considerations are playing a major role in that decision. Shawn Donnan (@sdonnan) reports, “The global economy is unlikely to see the same heated growth in trade that fuelled globalisation before the 2008 financial crisis largely because China’s manufacturers are turning inward, according to research by the International Monetary Fund and the World Bank.”[2] All of these changes compelled the Financial Times‘ editorial staff to ask, “Where has all the trade gone?”[3] The editorial explains:

“Looking at the figures, a casual observer might conclude that globalisation is in crisis. Total trade in goods and services, having initially bounced back from the global financial crisis, has slowed sharply. Usually growing twice as fast as the world economy, it is underperforming gross domestic product for the first time in four decades.”

Fortunately, the FT staff believes “the situation is less dire” than it may appear. It explains:

“The period since the financial crisis is certainly not a re-run of the retreat from free trade in the Great Depression. Despite some governments indulging in ‘murky protectionism’ — using regulations to disadvantage foreign competitors — there has been no wholesale resort to trade barriers. … Economists from the International Monetary Fund and the World Bank came up with a more plausible explanation: the global system is going through a structural change. Activity that previously involved cross-border trade has been brought within national economies, notably China. A slowing of measured trade growth is not therefore a cause for alarm. It does, however, underline that policy makers should be alert to assess and shape the changing future of globalisation.”

These changes to globalization have a lesson that transnational corporations need to learn, which is: You have make yourself part of the domestic or regional system and tailor your supply chain to fit that model. Robert Salomon (@RobertSalomon), a professor of international management at the NYU Stern School of Business, told Jeffrey Rothfeder (@jrothfeder), “Even for the most successful multinationals, profit margins in international markets are on average lower than margins in the domestic market. It’s the liability of foreign markets. By virtue of the fact that you are foreign, you are at a disadvantage.”[4] Rothfeder insists that the changing nature of globalization has many companies asking, “Should we reconsider, even rein in, our global growth strategy?” He claims this “has become an urgent, if still hushed, discussion.” Frankly, this is not a new discussion. Back in 2008, New York Times‘ columnist David Brooks wrote, “Globalization is real and important. It’s just not the central force driving economic change.”[5] He explained:

“Some Americans have seen their jobs shipped overseas, but global competition has accounted for a small share of job creation and destruction over the past few decades. Capital does indeed flow around the world. But as Pankaj Ghemawat of the Harvard Business School has observed, 90 percent of fixed investment around the world is domestic. Companies open plants overseas, but that’s mainly so their production facilities can be close to local markets. Nor is the globalization paradigm even accurate when applied to manufacturing. Instead of fleeing to Asia, U.S. manufacturing output is up over recent decades. As Thomas Duesterberg of Manufacturers Alliance/MAPI, a research firm, has pointed out, the U.S.’s share of global manufacturing output has actually increased slightly since 1980.”

Writing more recently, Robert J. Bowman, Managing Editor of SupplyChainBrain, reported, “Back in 2011, in the midst of an intensifying debate about the impact of globalization, author and academic Pankaj Ghemawat voiced a view that was in sharp contrast to the prevailing wisdom on the subject: ‘We’re not nearly as globalized as we think we are.’ That was a key finding of Ghemawat’s book, ‘World 3.0: Global Prosperity and How to Achieve It.’ Three years later, his insight has been validated by the latest edition of the DHL Global Connectedness Index (GCI), co-authored by Ghemawat and Steven A. Altman.”[6] The point here is that lamenting the death of globalization is probably premature. The traditional picture of globalization has not always been accurate and its emerging regional nature is nothing to be feared. It does, however, require companies to adapt to the changing business landscape. Boston Consulting Group analysts, Hans-Paul Bürkner, Arindam Bhattacharya, and Jorge Becerra, assert, “The huge wave of globalization that took place over the last two decades has come to an end. The big winners are those companies that have established a significant international footprint — especially in emerging markets — pulling ahead of companies with a regional or domestic focus.”[7] They go on to note, however, “Globalization is not dead. Rather, it is morphing into a more nuanced and more complex phase, with the inexorable forces that drove the previous phase still very much alive. The emerging markets will continue to be the key source of growth, owing to their favorable demographics, rising middle classes (which will increasingly define consumer demand and choices), and new generation of ‘challenger’ companies (which will seek partners in their quest to become global market leaders).”

Bürkner, Bhattacharya, and Becerra recommend that companies do five things to adapt to the changing face of globalization. First, position your company geographically. They write, “You can be global in more than one way. … Some truly global companies — such as P&G, Unilever, and Nestlé — have very successfully followed a multilocal approach: they have created different brands — some global, some local; they have developed different price points for different markets; and they have developed a variety of global and local supply chains.” That’s great advice. Second, they recommend that companies learn how to deal with rapidly changing conditions around the world. They write, “Your company, however large, must be agile, so that you can make quick-fire changes to your setup if local or regional conditions change. You have to be able to abandon certain operations without undermining your global operations. So although you must be ruthlessly efficient, you must have some slack in the system — some ‘redundancies’ — so that individual problems do not disrupt your global supply chains.” Third, they recommend that, if necessary, you reorganize your company. They suggest creating “a broad array of business units, with their own headquarters and decentralized decision-making.” If you do, they believe “you stand a much better chance of success.” Fourth, they recommend that companies develop a global culture (i.e., a multicultural mindset). They explain, “It is essential that you create a multicultural environment that reflects the diversity of your employees and your customers.” Finally, they recommend that business executives develop a leadership style that matches the organization described earlier. “You have to travel extensively; you have to spend time on the ground in different countries. It is crucial to have firsthand knowledge of what’s going on.”

Bürkner, Bhattacharya, and Becerra conclude, “The global company is often viewed as one big, all-encompassing corporate entity. Yet the most successful are anything but.” Few transnational businesses are likely to succeed in areas of the world that are fragmenting; but, companies like P&G, Unilever, and Nestlé have demonstrated that success is still possible in a more regionalized world.