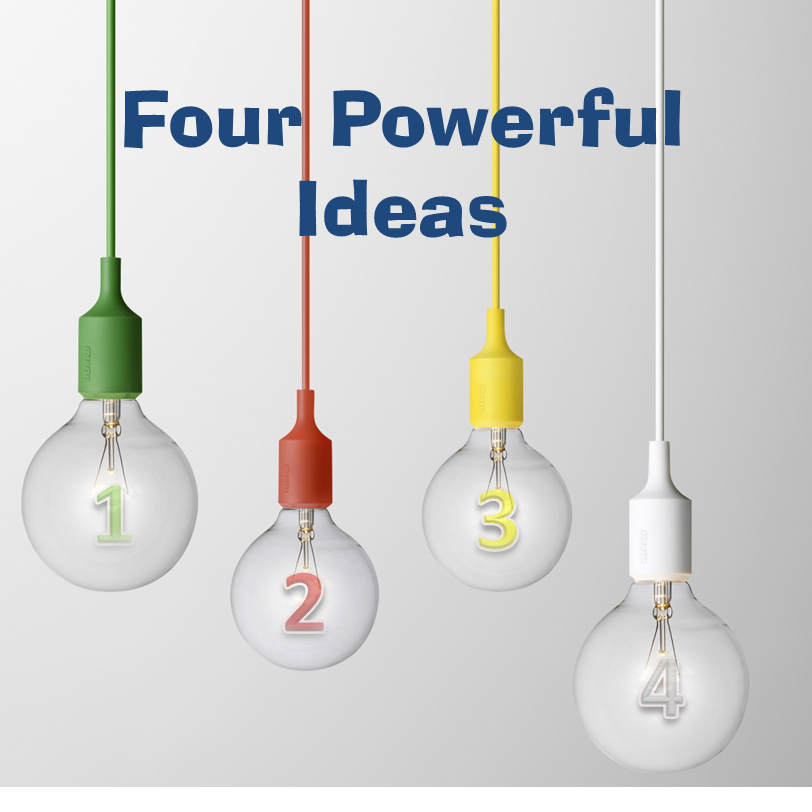 In an excellent series of articles about innovation, Rowan Gibson (@RowanGibson) explains how “innovation is — and always has been — the fundamental driver of human progress. From the dawn of civilization onward, technological creativity has been the primary fuel for economic growth, or what economic historian Joel Mokyr refers to as ‘the lever of riches’.”[1] Companies, of course, want to be able to use that “lever of riches” to increase their bottom line and remain relevant in an ever-changing world. Companies can find any number of creativity gurus who are willing to help them foster more and better creative thinking within their companies; but, innovation takes more than coming up with new ideas. Below are four concepts culled from some of those experts that companies might want to keep in mind when they are looking to become more innovative.

Paul J.H. Schoemaker (@Decision_Strat), research director of the William and Phyllis Mack Institute for Innovation Management at the Wharton School and founder and executive chairman of Decision Strategies International (DSI), and Steven Krupp (@Steve_Krupp), CEO of DSI, write, “Good strategic thinking and decision making often require a shift in perspective — particularly in environments characterized by significant uncertainty and change. What worked in the past simply may not apply in the future. Asking ‘what if’ questions about the future may create discomfort, since answers are often not obvious. But asking such questions also forces you to step back and challenge current assumptions that prevent you from seeing breakthrough solutions.”[2] I’m a big fan of “what if” thinking because it is another tool that forces us to change perspective, think differently, and ask good questions. “Brilliant thinkers never stop asking questions because they know that this is the best way to gain deeper insights,” writes Paul Sloane (@PaulSloane), founder of Destination Innovation.[3] To underscore his point, Sloane points to Eric Schmidt, CEO of Google, who said, “We run this company on questions, not answers.” Sloane adds, “He knows that if you keep asking questions you can keep finding better answers.” It has been my experience that the best analysts are those who ask the best questions. Leigh Buchanan (@LeighEBuchanan) agrees. “The key to innovation,” she writes, “is not gathering more data but rather asking more questions.”[4]

As I have noted in the past, it doesn’t take a genius to come up with a new idea. People get ideas all the time. Innovators, however, act on their ideas. Over half a century ago, the late Isaac Asimov, a true genius and Renaissance man, wrote an essay entitled “On Creativity” that went unpublished until last year. Asimov began his essay by asking, “How do people get new ideas?”[5] Asimov concluded, “What is needed is not only people with a good background in a particular field, but also people capable of making a connection between item 1 and item 2 which might not ordinarily seem connected.” He continues:

How many times have you seen a new invention or product and smacked yourself on the forehead and exclaimed, “Why didn’t I think of that?” Asimov, it appears, was on to something. Frans Johansson believes that one of the best ways for people to make critical connections is to create a space for people from different disciplines to get together to discuss problems. What happens when such groups do get together, Johansson calls “The Medici Effect.” The Medici’s were a wealthy and powerful Italian family who played an important role in the Renaissance. The family’s wealth permitted it to support artists, philosophers, theologians, and scientists, whose combined intellect helped burst the historical pall known as the Dark Ages. As Individuals, we need to create our own Medici Effect by reading widely and exposing ourselves to new experiences and disciplines. Only then will we be able to make non-obvious connections. Companies need to do the same thing by bringing together groups of diverse individuals from a multitude of disciplines to address specific problems.

There are a number of definitions floating around about what really constitutes an innovation. My personal preference is the innovation formula, which is: innovation = new x valuable x realized. Another way of defining innovation is what I call the “Four I” framework: “Innovation Involves Idea Implementation.” In other words, the difference between creativity (i.e., idea generation) and innovation is the difference between dreams and reality. Innovators make things happen. Jeff DeGraff (@JeffDeGraff), an innovation professor at the Ross School of Business and founder of Innovatrium Institute of Innovation, believes that the late Marshall McLuhan had the right idea. He notes, McLuhan “focused on [an innovation’s] effects and not its causes.”[6]

Gibson puts the first three ideas together in a fourth powerful idea by suggesting that ideas are result of a step-by-process. He asks two important questions, “Why are [companies] mostly getting only lukewarm suggestions for incremental improvements rather than radical new concepts for revolutionizing their industries? How can an organization get dramatically better at generating big, breakthrough ideas?”[7] Gibson continues, “To answer these questions, we first have to understand how big ideas are actually built.” He explains:

“There is a substantial body of work on creativity that is readily available to business people. But the reality is that few corporate leaders and managers have given it much attention, preferring instead to focus on improving operational efficiency inside their organizations while hoping that — by some lucky accident — one of their people will have a Eureka moment while walking the dog. What we now know quite conclusively is that creative ideas don’t just occur to us spontaneously from one moment to the next, although that might often appear to be the case. Our minds actually build them from a unique chain of associations and connections, sometimes over a considerable period of time.”

Gibson goes on to explain there are four steps in this idea-building process. First, a person gains insight, which is the input that starts the process. The best way to gain insight is by asking good questions. The best innovators are naturally curious. According to Gibson, this insight involves “a new and penetrating understanding which allows us to see a problem or situation in a different light.” The second step involves a leap of association, which is the throughput that keeps the processing moving. Gibson explains that this association involves “a shift in our thinking that connects various elements (thoughts, concepts, data) in a totally new relationship.” The third step involves the development of a new idea, which is the output of the process. Gibson indicates that a new idea involves “a fresh and different pattern of thoughts that suggests an original, exciting or better course of action.” The final step is the Eureka moment, which is the experience that culminates the process. Gibson writes that this final step involves “an exhilarating moment of awareness when we recognize the breakthrough potential of a new idea with all certainty and clarity.”

By combining these powerful concepts, companies can leap ahead when they set out to design an innovation process that will help them remain relevant in the years ahead.